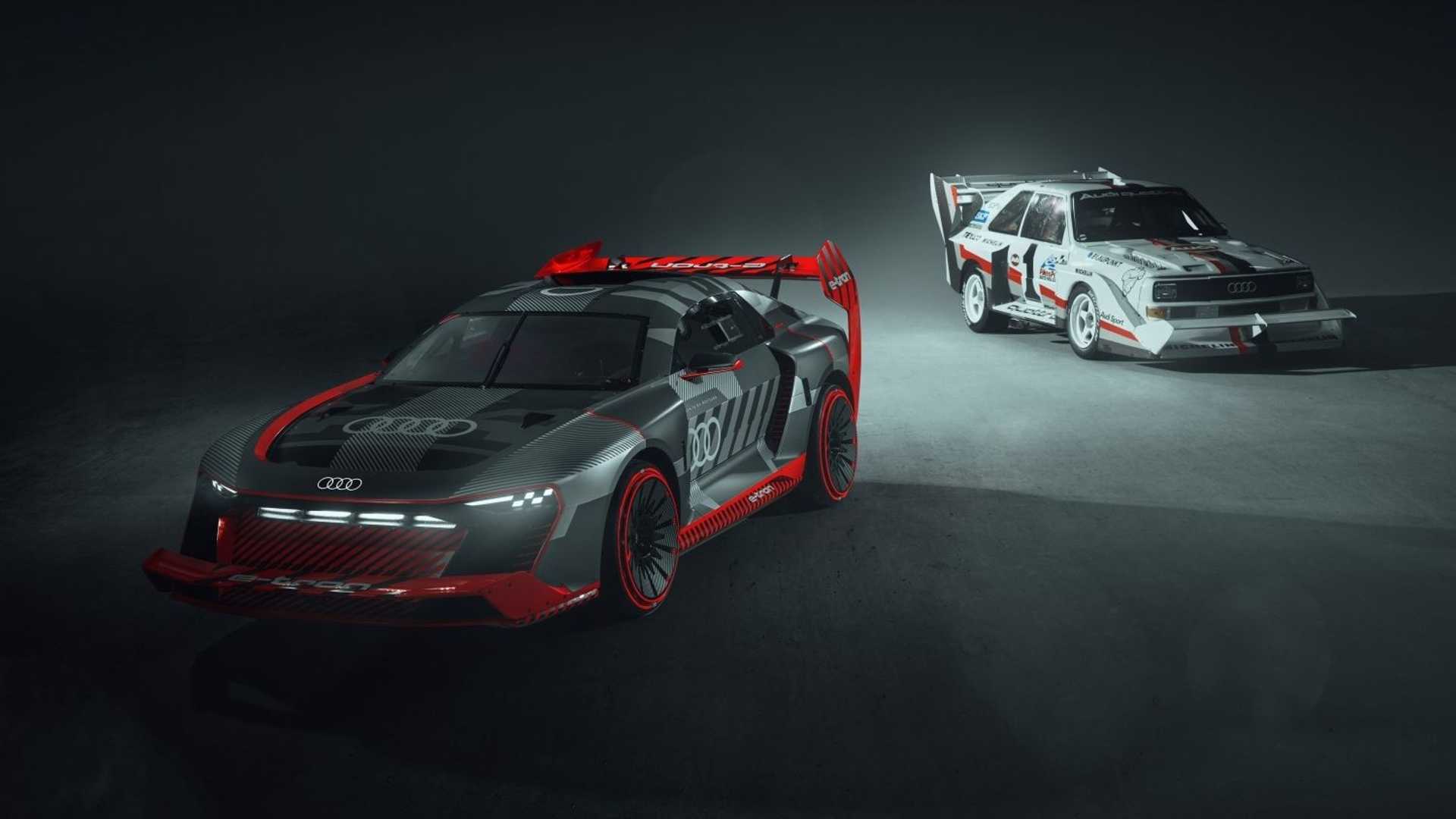 Ken Block’s Audi S1 E-Tron Quattro Hoonitron makes its debut in the United States at the Rolex Monterey Motorsports Reunion at Laguna Seca from August 17 through August 21. As an extra bonus, a 1985 Audi Sport Quattro S1 Group B rally car goes on display there, too.

The Hoonitron takes design inspiration from the classic rally car but features cutting-edge technology. It features a carbon-fiber chassis and a pair of electric motors that provide all-wheel drive. The public gets to see what the unique EV can do in a few months when Block releases his Electrikhana video featuring the vehicle doing automotive stunts.

The Hoonitron lots of intriguing design details. The front has a massive splitter, and there are old-school, turbo-style wheels with carbon fiber exterior portions. Massive fender flares are on both ends. At the back, the sideplates of the wing stretch downward and connect to the bodywork.

The Audi Sport Quattro S1 Group B rally car at the Rolex Monterey Motorsports Reunion is the same one Walter Röhrl set of record of 10 minutes and 48 seconds at the Pikes Peak Hillclimb in 1987. This is still the quickest time for the unpaved version of the course. Today, the road is tarmac all the way up the mountain.

In September 2021, Block announced his new partnership with Audi after 11 years working with Ford. In December, he unveiled the S1 E-Tron Quattro Hoonitron. The automaker said the vehicle came together in just four weeks. The exterior design went from sketches to a rendering and then a full-scale model.

Unfortunately, we don’t yet have any powertrain or battery specs for Block’s custom-built EV. Perhaps, those details might arrive closer to the release of Electrikhana.

As part of his deal with Audi, Block also got a customized RS E-Tron GT. It has some Star Wars Stormtrooper aesthetic vibes with a matte white body and black trim. The wheels are also white and have different designs at the front and rear. Block uses the carbon box on the roof for hauling his snowboard and boots. He plans to use the vehicle as his family car.

News: Sabine Marcelis’s unique sculpture has been unveiled at Hotel de la Ville for all to admire