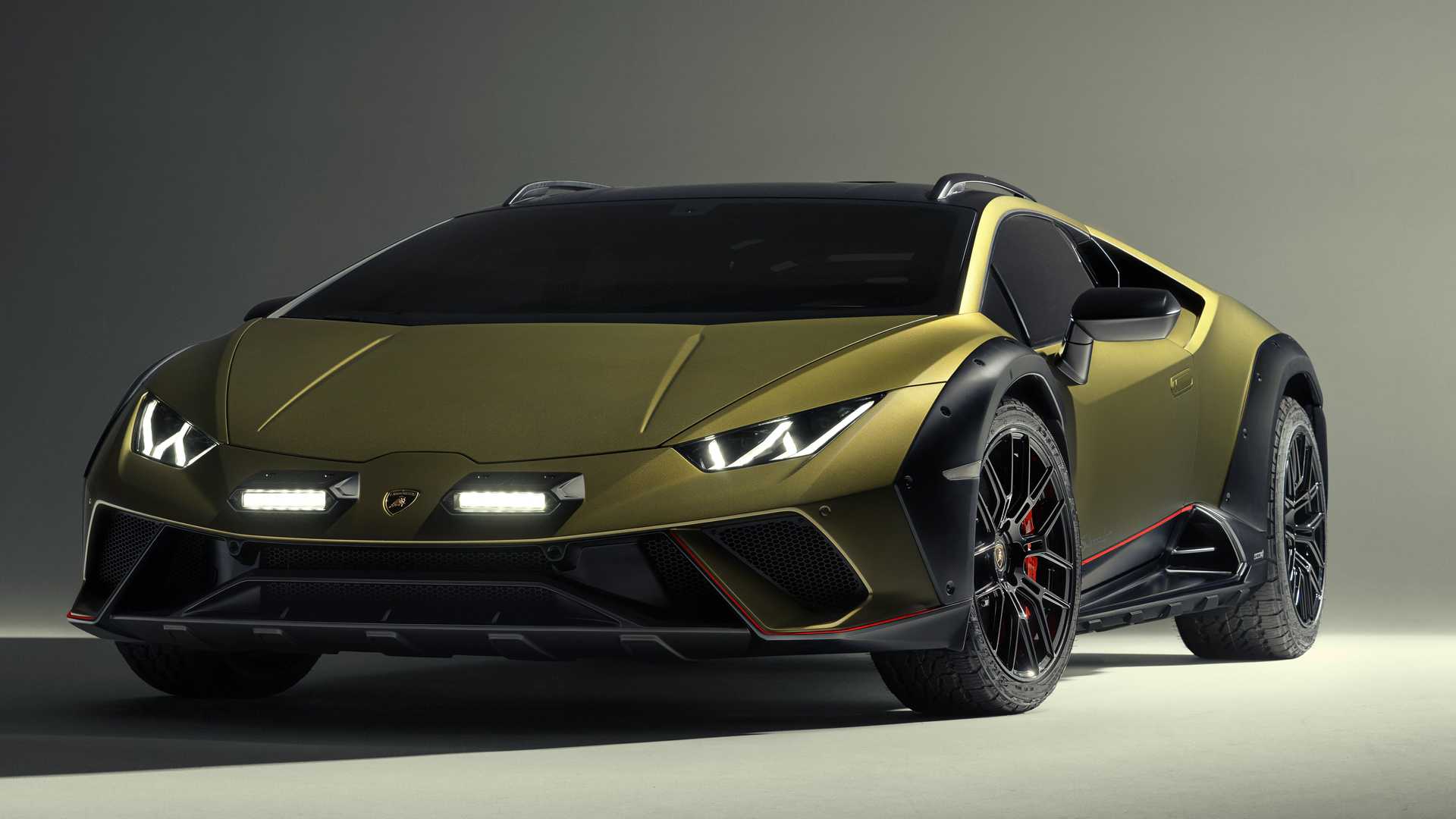 It’s ironic that Lamborghini’s first car-based off-roader will also be its last pure-combustion vehicle. That’s what you get with the new Huracan Sterrato, and it’s finally official with a debut taking place for Art Basel in Miami.

This is the culmination of months of spy photos showing the lifted Huracan in action. The exterior design was officially revealed earlier in November, albeit somewhat shrouded in smoke. Now we have full disclosure, and here’s what you’ve been itching to know. The Sterrato has a modest 1.7-inch suspension lift over the Huracan Evo. This allows for more suspension travel, and Lamborghini gives the Sterrato an updated version of its Integrated Vehicle Dynamics system to make the most of it. There are new calibrations for Strada and Sport driving modes, and there’s a new Rally mode dedicated to low-grip surfaces.

In addition to being taller, the Huracan Sterrato is also slightly wider. The track is stretched 1.2 inches in the front and 1.3 inches at the back, and of course it’s all-wheel drive. 15-inch brakes with six-piston calipers provide stopping power at the front, with 14-inch discs and four-piston calipers at the rear. They are tucked behind 19-inch wheels shod with a special set of Bridgestone Dueler AT002 all-terrain run-flat tires, made specifically for this car. They’re still low-profile 40-series rubber, but there’s at least a little more sidewall for protection and comfort when venturing off-pavement.

The tires also offer a bit more bite in the dirt, which is important when you have 602 horsepower (449 kilowatts) and 413 pound-feet (560 Newton-meters) of torque to play with. That’s the rating for this version of Lamborghini’s 5.2-liter V10, sending all that power through a seven-speed dual-clutch gearbox. When the grip is plentiful, the Huracan Sterrato will reach 100 km/h (62 mph) in 3.4 seconds and continue on to a top speed of 162 mph. It’s not as flat-out fast as other Huracans, but it also has a very different purpose in life.

That’s further evidenced by the Sterrato’s visual appearance. Aluminum underbody panels protect vital portions of the powertrain. It also gets reinforced sills and a relocated air intake at the back of the roof, designed not for deep-water fording but to pull in clean dust-free air. It’s impossible to miss the bold fender arches and auxiliary lights on the nose, and moving inside you’ll find exclusive Verde Sterrato Alcantra upholstery with new graphics on the touchscreen. There are also several off-road-focused instruments including an inclinometer, pitch and roll indicator, steering angle indicator, and more.

If the Sterrato isn’t special enough as-is, Lamborghini says there are “almost unlimited” possibilities for customization. Through the Lamborghini Ad Personam program, 350 exterior colors and 65 interior shades are available.

While customizations might be nearly unlimited, the Sterrato itself is not. Lamborghini will build 1,499 units for the world, with production starting in February 2023. Pricing will be announced later.