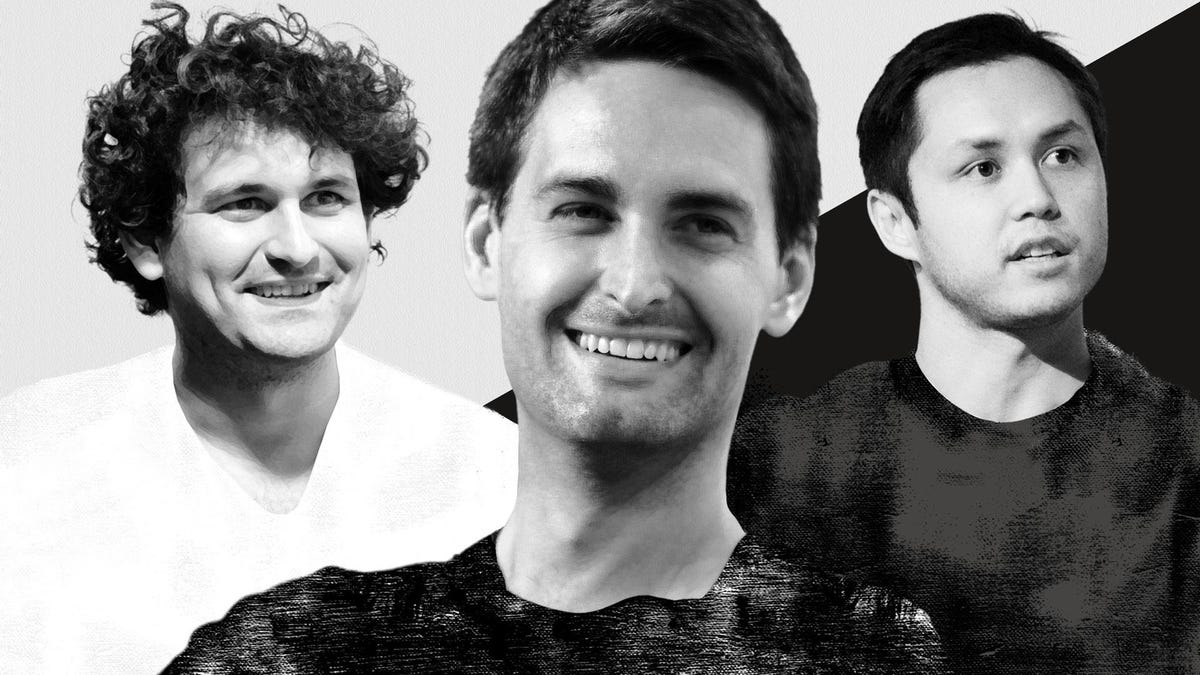 Chaos in crypto and turmoil in tech have sent many young billionaires tumbling down the wealth rankings over the past year. These are the 10 who survived.

t’s not as easy as it was to be young and rich. After their fortunes surged last year thanks to a pandemic-fueled burst of momentum in the markets, many young billionaires tumbled down the wealth rankings in 2022 as rising inflation and fears of recession roiled industries ranging from technology to used car sales.

There are 10 billionaires under the age of 40 on this year’s Forbes 400 list of the richest Americans, down from 15 last year. One billionaire simply aged out of the youngest group: In-N-Out Burger heir Lynsi Snyder (worth an estimated $4.2 billion) turned 40 in May. The others all fell below the list’s $2.7 billion cutoff—or out of the billionaire rankings altogether—amid the market’s wild swings.

The plummeting value of cryptocurrencies wiped tens of billions of dollars of wealth from crypto billionaires, including Fred Ehrsam, the 34-year-old cofounder of cryptocurrency exchange Coinbase, whose net worth fell from an estimated $3.5 billion last year to $1 billion. Baiju Bhatt, the 37-year-old cofounder of investing app Robinhood, lost his billionaire status after Robinhood’s stock plunged 60% below its 2021 IPO price in January; Bhatt debuted on The Forbes 400 last year with an estimated net worth of $2.9 billion. RJ Scaringe, the founder and CEO Rivian Automotive who was worth an estimated $3.4 billion last year, also dropped out of the three comma club in March after a hefty price hike by the electric vehicle maker sparked a stock selloff. Shares are down nearly 60% since its November IPO. (Two others who were under 40 last year, Pinterest cofounder and CEO Ben Silbermann and Ernest Garcia III, the cofounder and CEO of embattled online auto retailer Carvana, fell off The Forbes 400 this year but would have aged out of this group anyway, having both turned 40 over the past year.)

Only one new youngster debuted on the list this year, Gary Wang, the 29-year-old cofounder and chief technology officer of Bahamas-based FTX, one of the leading exchanges for buying crypto derivatives which he started with fellow billionaire Sam Bankman-Fried in 2019. Wang replaces his 30-year-old cofounder as the youngest person on this year’s list.

Duncan became a billionaire at 27 when his father, the late Texas oil tycoon Dan Duncan, died in 2010. He and his three older siblings each inherited a stake in Enterprise Products Partners, the Houston-based pipeline empire started by their father in 1968. Only Duncan’s sister, Randa Williams, is actively involved in the company.

The Coinbase cofounder and CEO lost nearly $9 billion over the past year as the value of his cryptocurrency exchange plummeted 75%, from about $60 billion (market cap) to $15 billion. Armstrong, a former Airbnb software engineer, owns about 19% of the shares of the crypto broker he launched back in 2012 at age 29.

Blecharczyk is the only one of Airbnb’s three cofounders still under 40. He serves as the chief strategy officer of the vacation rental company and the chairman of Airbnb China. Amid a rollercoaster for Airbnb’s shares, which have dropped almost 30% over the past year, Blecharczyk has sold more than $480 million worth of stock, or about 3.5% of his stake.

Though he remains the richest person under 40 on The Forbes 400 by a long shot, the Meta cofounder and CEO is nearly $80 billion poorer than last year. Meta’s stock is down about 60% year-over-year, fueled in part by a decline in the social media site’s users and early obstacles to its expansion into the so-called “metaverse.”

A Facebook cofounder, more than half of Moskovitz’ wealth comes from an estimated 2% stake in Meta Platforms; another quarter is tied to Asana, the workflow software company he started after leaving Facebook. Between Meta’s 60% drop and Asana’s 80% dive, Moskovitz is an estimated $16 billion poorer this year.

The grandson of Walmart founder Sam Walton quietly inherited a fortune—including an estimated 4% stake in his family’s mega retailer–when his father, John T. Walton, died in a plane crash in 2005. Instead of working for the family business, the Chicago-based billionaire is funneling his wealth into supporting social and environmental causes through his investment and philanthropy platform, Builders Vision.

Snapchat cofounders Spiegel and Murphy both shed about 80% of their wealth over the past year, mirroring the downturn in the shares of their social media company. Broader industry struggles were compounded by Apple’s privacy changes, which slashed Snap’s advertising revenues. In August, CEO Spiegel announced the company would lay off 20% of its staff and discontinue at least six products.

Bankman-Fried owns about half of the cryptocurrency exchange FTX. While he’s lost more than $5 billion since last year, according to Forbes’ estimates, he’s fared better than many others in the crypto industry—and even provided $750 million in credit lines to other struggling crypto companies earlier this year.

Wang, a former Google software engineer, launched FTX with Bankman-Fried, who had been a college housemate at MIT. He keeps a much lower profile than his cofounder.

MORE FROM FORBES2022 Forbes 400 Methodology: How We Crunch The NumbersBy Chase Peterson-WithornMORE FROM FORBESCrypto Winter Knocks 3 People Off Forbes 400 List Of Richest AmericansBy John HyattMORE FROM FORBESTrump Rejoins The Forbes 400 A Year After Falling Off The ListBy Dan AlexanderMORE FROM FORBESAmerica’s Richest Tech Billionaires Have Lost $315 Billion In The Past YearBy Rachel Sandler