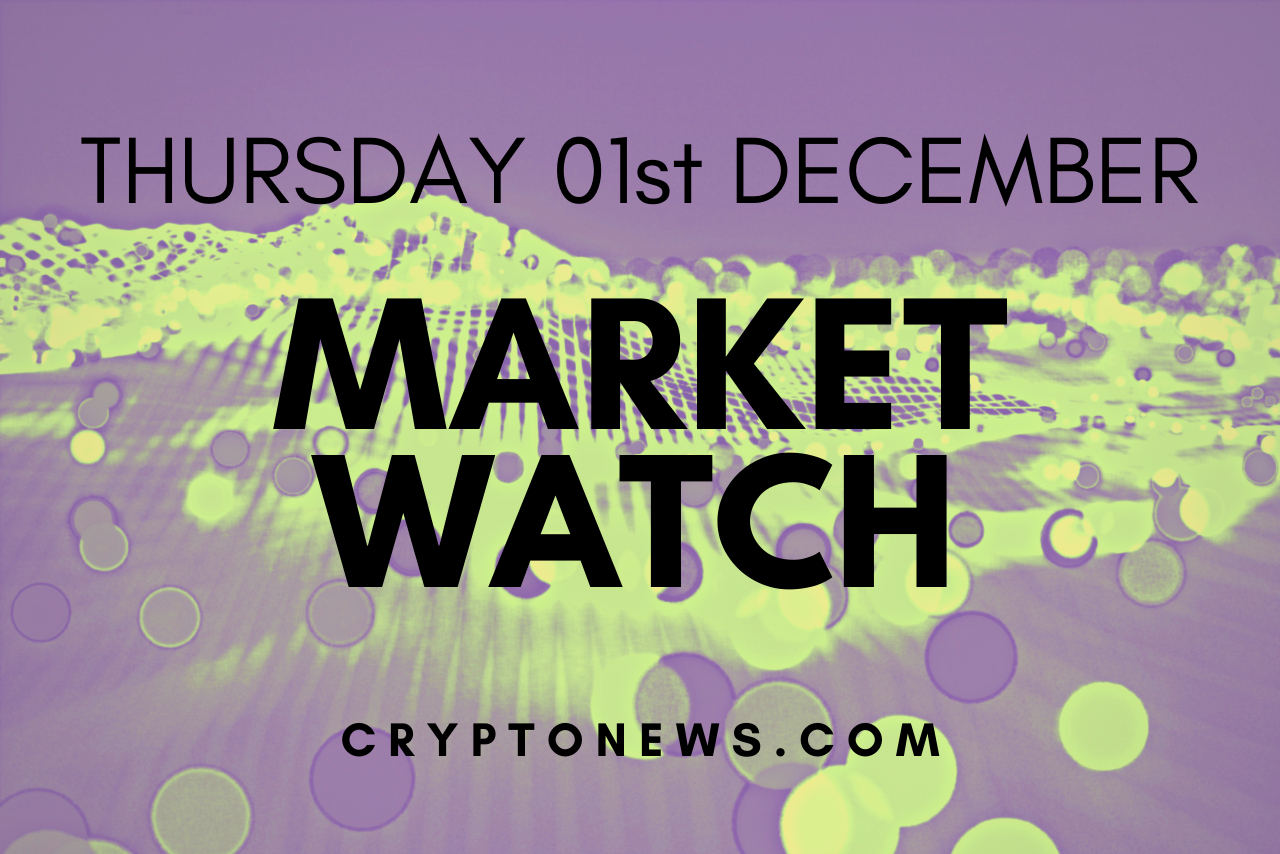 The cryptocurrency market has exhibited a slight recovery, with Bitcoin, the leading cryptocurrency, jumping more than 2.5% to $16,815 after getting rejected at the $17,250 resistance level. Similarly, Ethereum, the second-most valuable cryptocurrency, is rising, reaching $1,286 after violating a symmetrical triangle pattern.

Major cryptocurrencies were trading positively early on December 1, as the global crypto market capitalization increased 0.56 percent in the previous day to $861.06 billion.

Over the last 24 hours, overall crypto market volume grew 5.03 percent to $49.73 billion. The overall volume in DeFi was $3.43 billion, accounting for 6.90 percent of the total 24-hour volume in the crypto market.

The overall volume of all stablecoins was $47.01 billion, accounting for 94.53 percent of the total 24-hour volume of the crypto market.

Kraken to Lay off 30% of Its Global Workforce

According to a corporate blog post published on Wednesday, US-based cryptocurrency exchange Kraken will lay off 30% of its global employees, or over 1,100 individuals, to “adjust to current market conditions.”

Since the beginning of this year, financial markets have been under pressure for macroeconomic and geopolitical reasons.

“As a direct result, we saw a precipitous drop in trading volumes and new client sign-ups. Unfortunately, bad things have kept happening on the market, and we’ve used up all the good ways to change prices to meet demand.”

As a result of these layoffs, Kraken’s overall workforce is back to where it was a year ago, the business claimed.

After the recent failure of the cryptocurrency exchange FTX.com in the Bahamas, which has dragged down cryptocurrency markets and threatened businesses with exposure to FTX (including crypto lender BlockFi Inc., which filed for bankruptcy this week), Kraken has taken this action.

After failing to make a principal repayment on a 2,400 Wrapped Ether (wETH) decentralized finance (DeFi) loan, cryptocurrency trading firm Auros Global looks to be infected with the FTX virus.

On November 30, M11 Credit, an institutional credit underwriter that oversees liquidity pools on Maple Finance, tweeted to its followers that the Auros had failed to make a principal payment on a 2,400 wETH loan worth around $3 million.

According to M11 Credit, Auros is facing a “short-term liquidity crisis as a result of the FTX insolvency,” The company has been in constant contact with its borrowers, especially in light of recent events.

Maple Finance has retweeted the thread, but algorithmic trading and market-making business Auros has yet to respond to M11 Credit’s claims.

This means that the deadline for Auros to make the late payment and avoid default is December 5.

Given this news, the market is still determining whether to maintain the bullish trend or wait for a correction.

The current Bitcoin price is $16,815, and the 24-hour trading volume is $24 billion. During the last 24 hours, the BTC/USD pair has gained nearly 2.5%, while CoinMarketCap currently ranks first with a live market cap of $323 billion, down from $323 billion yesterday.

The BTC/USD is trading with a bullish bias on Thursday, but it has reached an overbought zone, and the double top pattern is extending resistance near the $17,255 level. A bullish breakout of the $17,255 level could lead Bitcoin to the next resistance levels of $17,600 and $18,000.

On the 4-hour timeframe, Ethereum has been trading strongly bullish, but it is now encountering strong resistance at the $1,310 level. The formation of the tweezers’ top pattern is weakening the bullish trend and may lead to a bearish market correction.

On the technical front, the HT/USD pair is facing immediate resistance at $7.40, with a break above this level potentially exposing HT to the $8.35 level.

Dash 2 Trade is an Ethereum-based trading intelligence platform that provides real-time analytics and social data to traders of all skill levels, allowing them to make better-informed decisions. The platform will go live in the first quarter of 2023, providing investors with information to help them make proactive trading decisions.

Dash 2 Trade has been a success as well, with two exchanges (LBank and BitMart) promising to list the D2T token once the presale is completed. 1 D2T is currently worth 0.0513 USDT, but at the end of the sale, this will increase to $0.0533.