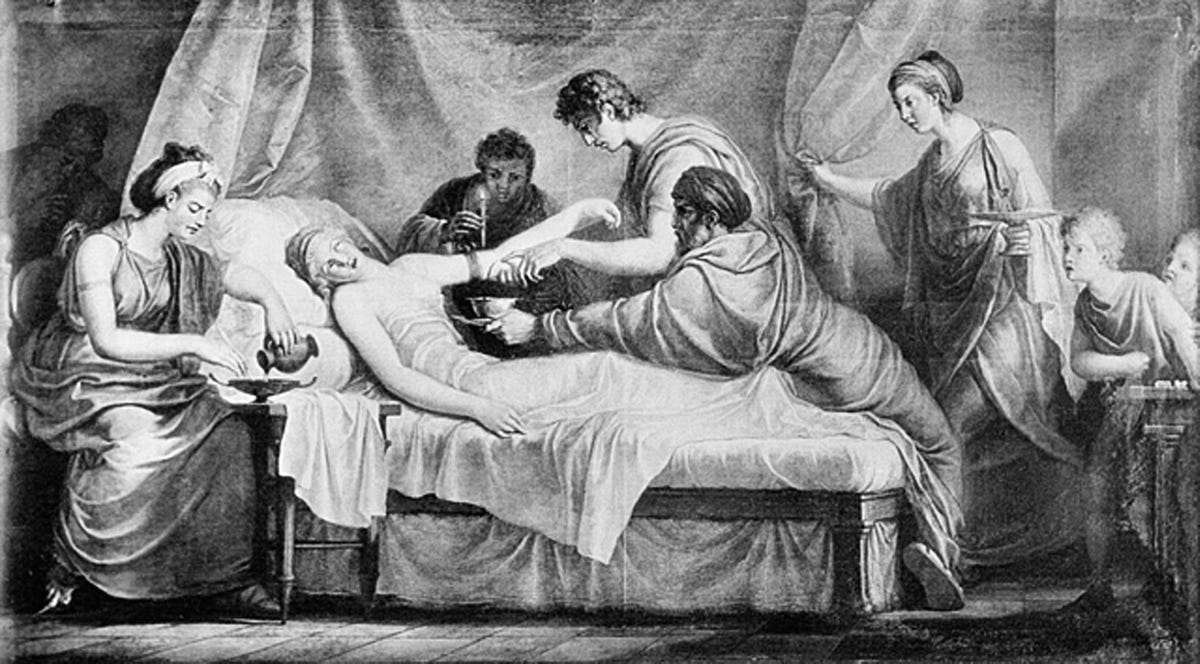 I was recently reading a book on the life of Beethoven, the composer, and what caught my attention was that he almost lost his life when doctors of the time recommended his deafness be cured by bloodletting! Apparently Mozart, Charles II and many others were not so lucky. Even George Washington was “bled” until he died – supposedly as a cure for throat infection.

Bloodletting was a common medical practice for thousands of years until the 18th century for all types of ailments (here). Today, the technique is still used for some diseases, typically those related to an excess of iron in the red blood cells (the technique is called phlebotomy, and the diseases for which it is currently used are hemochromatosis, polycythemia and porphyria cutanea tarda – I am not a doctor of medicine so you will have to look this up). So yes, bloodletting does make some sense for specific maladies. But to use it as a solution to everything, due to lack of understanding of biological mechanism seems outright crazy in retrospect. But we cannot read history backwards. Given what the doctors knew at the time, and given what the principles of medicine were based on (the four elements: earth, wind, water, fire), it was the optimal, perhaps the only solution known to the doctors of the day.

Thankfully, we’ve progressed medically. By bleeding a patient to health, the technique relied on the (pseudo)-science of the day. In most cases, the swooning of the patient from loss of blood was considered to be the signal to stop, hopefully before the patient either dropped or perished. The cure really was worse than the disease in many cases.

One theory behind bloodletting was that many diseases were caused by a plethora (excess) in the blood, and these could be eliminated by removing the blood. The tools for bloodletting included “lancets”, “fleams”, and yes “leeches”. The practice was not limited to one culture or country – to the contrary it was considered established medicine since historic times. And of course academic papers and books were written in support of the practice. The practice persisted for centuries because of “the dynamic interaction of social, economic and intellectual pressures” (here).

Economic theory and Central Banking today seems to be re-running the story in parallel, because central banks hubris and economic dogma of the day makes people believe that excesses in the economy can be cured by asset price deflation, or financial bloodletting. The Fed, and other central bankers like the ECB who followed the Fed blindly over the edge in asset purchases and massive stimulus, now seem to have decided that the only way to restore “equilibrium” in the economic body is to let some blood flow, so to speak. Without admitting that they made a colossal mistake of judgment and decision making in the last few years, now they have pivoted 180 degrees from market friendly policies and embarked on a course of tightening conditions, come what may. As a matter of fact, they are now “happy” that markets fall when they tighten, and the bloodletting won’t stop until the market is close to fainting…which might happen sooner than most folks expect. A major crash in financial asset prices has already occurred in 2022, because a bubble was created by the excess stimulus of the last few years. But since the patient is still looking healthy, the bloodletting cannot stop, yet. Is there more to come and if so, what can we do about this self-inflicted pain that is a consequence of policymaking pseudocience?

First, how do we know that the central banks are engaged in “pseudoscience”? As a scientist by training, I can offer some suggestions (also see this excellent article).

First, pseudoscience displays a remarkable indifference to facts, and in many cases uses anecdotes and personal experience in place of facts. Second, pseudoscience starts with implausible but appealing hypotheses. Third, pseudoscience refuses to put its claims to a meaningful test. Fourth, it contradicts itself. Fifth, it creates deliberate mystery where no mystery exists. Sixth, it makes extraordinary claims. Seventh, it makes heavy use of an invented vocabulary where terms have no definitions, unambiguous definitions, or imprecise ones. Eighth, pseudoscience explanations are by scenario, rather than mechanism. Ninth, pseudoscience appeals to magical thinking. And finally, pseudoscience appeals to the criteria of the scientific method while simultaneously denying its validity in the current context. We can go on…but a quick review of speeches of Powell (Fed), Lagarde (ECB), and Kuroda (BOJ) demonstrates most of these facets.

Over time, and mercifully, the scientific method of creating testable hypotheses, collecting data, and using common sense resulted in the cessation of bloodletting as a solution to most diseases. It was replaced by scientific medicine by understanding the mechanics, the biology, the chemistry, and the functional relationship of the components. An engineering solution, if I may. But many generations were bled to death to get to this point.

Next time you hear a central banker tell you that in order to control inflation they will do whatever it takes (raising rates and quantitative tightening), you are basically relying on their assurance that the symptom (inflation) is a complete description of the problem (structural imbalances), and if they raise rates enough, they will erase both the symptom and the cause. We know that neither human bodies nor economies work that way. You don’t cure a cold by taking antihistamine, you only make the symptoms go away for a while.

And as for medicine two years ago, when barber-surgeons used to perform most bloodletting, the risk is that the credibility of the central banking edifice comes crashing down as people realize that the operational principle was based on pseudoscience.

If this is a risk, what should investors do?

As investors who cannot fight the dogma that is currently driving central bank behavior, the choices are clear. First, we can refuse to be buffeted by the decisions of pseudoscientists by taking less risk investing in instruments that have historically been supported by central banks, but now are targets for the bloodletting; e.g., liquid equities, bonds and perhaps housing. In other words, investors should refuse to become sick patients who will agree to bloodletting as the only solution. Second, where possible, insure against that sudden collapse in credibility and the markets; i.e., hedge, while hedging is still affordable. And third and finally, be ready, with liquidity to invest, for the “pivot”, which of course, will be couched in new, mysterious language. For instance something to the effect of: “we are paying attention to market functioning”. That could very well be a signal that the bloodletting is coming to an end, i.e. the patient is almost dead.

For the first time in my memory, central bankers have conceded that asset price inflation does exist, and in order to bring actual inflation down, asset prices need to be deflated. As an asset owner, I would recommend getting your own, scientifically proven medicine of risk management, liquidity and hedging, before agreeing to become victims of financial bloodletting.

RBC just named its top picks for the fourth quarter. These are some of the stocks that made the cut