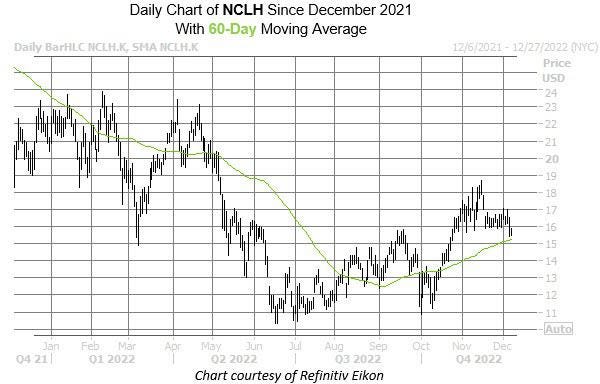 Norwegian Cruise Line Holdings (NCLH) saw a notable run up the charts in October and November, though the equity wound up running out of steam and pulling back by the middle of last month. Now, NCLH is consolidating below the $17 mark, and was last seen down 1.4% at $15.61. However, the shares are still well above their June lows near the $10 level, and this recent pullback has put the stock back near a historically bullish trendline on the charts.

According to data from Schaeffer’s Senior Quantitative Analyst Rocky White, NCLH just came within one standard deviation of its 60-day moving average. Per this data, there have been five similar pullbacks during the past three years. After 80% of these instances, the stock was higher a month later, averaging an impressive gain of 13%. A similar move from its current perch would put the security back above the $17 mark at $17.64.

It’s also worth noting that NCLH sits firmly in “oversold” territory, which is indicative of a short-term bounce. This is because the equity’s 14-day Relative Strength Index (RSI) sits at 22.

An unwinding of short interest could also put wind at the shares’ back. In the past reporting period, short interest rose 6.7% and now makes up 10.4% of the stock’s available float. Meanwhile, analysts are split on the equity, which could invite a round of bull notes. Of the 11 in coverage, five say “hold.”