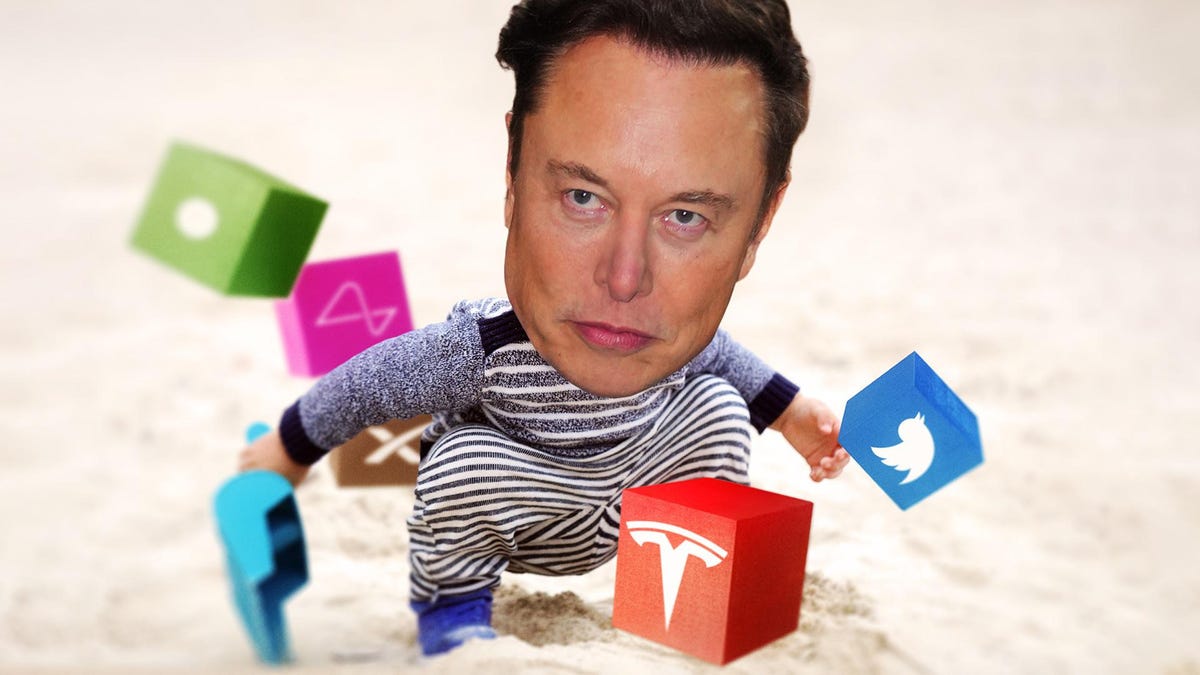 “I think if you’re a senior leader at Tesla, you’re praying and hoping that either Elon changes focus or gets off this Twitter thing.”

Last year, Elon Musk was cracking jokes on Saturday Night Live. Now, he is the butt of them. In the past week, he’s been ridiculed on almost every major late-night show in the U.S. On a recent Sunday night, John Oliver devoted an entire segment to his evisceration.

“Elon Musk, a man who answers the question: What if Willy Wonka benefitted from apartheid?”

For years, Musk has acted out without consequence, seemingly immunized to public criticism by a vast safety blanket of obsequious fanboys. He flouted the SEC, OSHA and National Labor Relations Board and had dustups with California regulators without ruffling Tesla’s board or even major investors. He called a hero a pedophile and early this year lambasted a sitting president as a “damp sock puppet,” with seemingly little reputational damage in either case. But his chaotic leadership of the cultural touchstone that is Twitter seems to be finally curtailing the billionaire’s hagiography. And the timing couldn’t be worse because Tesla, the dominant EV brand in the U.S and the jewel in Musk’s “peerless innovator” crown, is starting to lose market share to new competitors and old-school automakers including Ford, General Motors, Hyundai and Kia.

Consumers have long associated Tesla with an environmental mission, outlined by Musk in August 2006: shift the auto industry from planet-warming fossil fuels to electric power. And while he’s always been a disruptive entrepreneur–with a penchant for self-inflicted legal headaches–Tesla’s cofounder and top shareholder has recently been acting out in ways that make “mercurial genius” seem a diplomatic euphemism for incompetence and inanity. Notably, he’s espoused partisan political preferences and drawn criticism for tumult at Twitter, including massive job cuts, a more permissive attitude toward inflammatory or false information and welcoming controversial figures back to the platform who’d been banned for extremist, racist or harmful posts. Given his singular connection to Tesla, as the carmaker’s sole voice and face in recent years, that creates a problem.

“I think if you’re a senior leader at Tesla, you’re praying and hoping that either Elon changes focus or gets off this Twitter thing,” said Mario Natarelli, managing partner of brand researcher MBLM. “You could point to Kanye as an example of how something can erode very quickly.”

That erosion is already underway, according to research by Morning Consult. Since Musk’s Oct. 27 purchase of Twitter, Tesla’s overall favorability has dropped 6.2 points among U.S. adults, according to a Nov. 17 study. The change for the EV brand is more dramatic among Americans surveyed who identify as Democrats, falling 20 points in the past month, while rising 3.9 points among Republicans, Morning Consult said.

“At some point, and we’ve probably already passed it, Musk’s behavior damages the future prospects for Tesla as an auto manufacturer.”

Musk ranks as the second-most well-known U.S. CEO, trailing only Meta’s Mark Zuckerberg, according to Morning Consult. An estimated 44% of U.S. adults view Musk favorably, while 50% either view him unfavorably or have no opinion. However, his personal favorability is falling, dropping from “+22 percentage points in February 2021 to +16 points in November 2021 to +9 points last month,” the research company said in its recent “What Consumers Expect From CEOs” report.

“This downward trend reinforces that Musk’s controversial public persona is indeed not for everyone,” the research company said.

The full impact of any change in consumer views around Musk and the Tesla brand will take months to unfold, yet the Austin-based carmaker is already seeing a drop in its U.S. share of EV sales. Through the first nine months of 2022, Tesla’s share of the EV market was an impressive 65%, according to data compiled by S&P Global Mobility. But that’s down from a 79% share in 2020. With EV competition intensifying, combined with Tesla’s stagnating lineup of cars and refusal to sell lower-priced models, it’s likely to fall below 20% by as soon as 2025.

“Given that consumer choice and consumer interest in EVs are growing, Tesla’s ability to retain a dominant market share will be challenged going forward,” S&P said in its report.

While Tesla’s U.S. sales aren’t forecast to drop, the company’s lack of EVs priced below $50,000 has created a growth opportunity for rivals that do, including Hyundai, Kia, Volkswagen, Ford and General Motors. There’s also more competition than ever at the luxury end as Porsche, Mercedes-Benz, Lucid, Rivian, Audi and BMW expand their EV offerings. And while Tesla’s lineup is dusty by industry standards — its newest model came out about three years ago — rivals have the added benefit of fresh products.

New luxury competition may prove particularly tough for Tesla because, separate from any potential impact on Tesla from Musk’s public behavior on the brand, the way higher-end consumers view it is already shifting, according to Eric Noble, founder and president of automotive consultant The CARLAB.

“Right now, the EV to own is a (Porsche) Taycan or a Mercedes EQS. 100%,” says Noble, citing his company’s discussion with consumers. “There’s no cachet in a Tesla amongst the wealthy.”

And that is a real problem for Tesla, which arguably used that cachet to become the global standard for game-changing EVs.

“Used to be when you did consumer research, if you had Tesla owners, you could expect fanboys,” he said. “Today, it’s a coin toss. You can have Tesla owners and half will be fanboys. Half will be washing their hands of Musk personally, even though they still chose the vehicle. At some point, and we’ve probably already passed it, Musk’s behavior damages the future prospects for Tesla as an auto manufacturer.”

While Tesla’s stock has already taken a hit, falling more than 50% this year, broader brand studies haven’t yet reflected the impact of Musk’s behavior on how Tesla is viewed culturally. Last month, Interbrand’s annual Best Brands report ranked Tesla 12th among all global brands—trailing only Toyota and Mercedes-Benz among carmakers—based on data compiled through May 2022. Any changes in consumer sentiment around the Tesla brand won’t be clear until next year, said Andrew Miller, Interbrand’s chief growth officer.

“Tesla’s showroom is really aged and its quality record is very spotty. The last thing it needs is an increasingly unpopular buffoon as a mouthpiece.”

“Could the way Musk is behaving in and around (Twitter) cause negative blowback on the Tesla brand? Absolutely it could. We don’t know that it has yet,” he said. Tesla “is a product-led brand; there’s a cult of excitement around that product. And that does very directly connect to this (co)founder.”

Tesla fares even better in MBLM’s “Brand Intimacy” study, ranking as the second-strongest brand in an assessment that uses AI-based software to track consumer emotion and sentiment. Yet like Interbrand, that determination was made before Musk’s Twitter foray.

“I can’t wait until the next time we run the full study because I can imagine the results will be that the Tesla brand has been diluted or affected by the performance of its (co)founder,” said MBLM’s Natarelli. “Without a doubt, this is going to hurt.”

The promise of the Tesla brand has been “you’re on the cutting edge, you’re cool. You’re something special if you’re driving around in a Tesla,” says William Klepper, adjunct professor of management at Columbia University’s Business School. “Now if you’re driving a Tesla, it’s becoming: ‘let me see if I understand. There are options you had and you chose this one? Have you been listening lately to their CEO?”

“You damage your brand by virtue of what you associate with it and there’s no question that the Tesla brand is associated with Musk,” Klepper said.

Tesla, which alone among automakers doesn’t release U.S. sales figures, is poised to finally surpass the 1 million-unit mark in annual global deliveries in 2022, a goal it missed last year. Tesla’s worldwide deliveries to customers totaled 908,573 as of the end of September. Of those, about 341,000 were likely purchased in the U.S., based on S&P’s estimate of Tesla’s U.S. market share. Musk has set a goal of selling 20 million EVs annually by the end of the decade, which would be double the annual volume of global giants Toyota and Volkswagen.

New products are a key driver of growth in the auto industry, and Tesla’s current four-vehicle lineup is far from the market’s freshest. Its top-sellers and most recent addition, the Model Y crossover, has been on the market since January 2020, while the Model 3 sedan arrived in late 2017. Both look pretty much the same since their release. Tesla’s flagship Model S rolled out in 2012 and though it’s evolved over the past decade, it also still looks much as it first did. So does the pricey Model X SUV, which starts at $121,000, that came out in 2016.

Although the company plans to start delivering Tesla Semis to fleet customers this month, its next major addition is the Cybertruck, Musk’s version of a pickup due in 2023. Reports claim Tesla has more than 1.5 million potential orders for the vehicle, though whether those turn into sales in the years to come is unknown.

Aside from Musk’s behavior and image, Tesla has work to do in terms of improving its reputation for quality. The brand ranked near the bottom of J.D. Power’s most recent Initial Quality Survey, with 226 problems per 100 vehicles, 26% worse than the industry average. Tesla fared somewhat better in Consumer Reports’ latest vehicle reliability study, ranking 19th out of 24 brands, up from 23rd a year ago.

A potentially more problematic issue for the company in the near future could be action by the National Highway Traffic Safety Administration, which has been investigating multiple fatal accidents tied to the company’s partially automated driving software, Autopilot. Though Musk has portrayed Tesla as a leader in autonomous driving, its vehicles are not categorized as such in states including California. Plus, Tesla’s top rivals in that technology, such as Alphabet’s Waymo and General Motors-backed Cruise, have not been tied to any passenger fatalities.

“Here’s an easy way to look at it right now. Tesla’s showroom is really aged and its quality record is very spotty,” says CARLAB’s Noble. “The last thing it needs is an increasingly unpopular buffoon as a mouthpiece.”