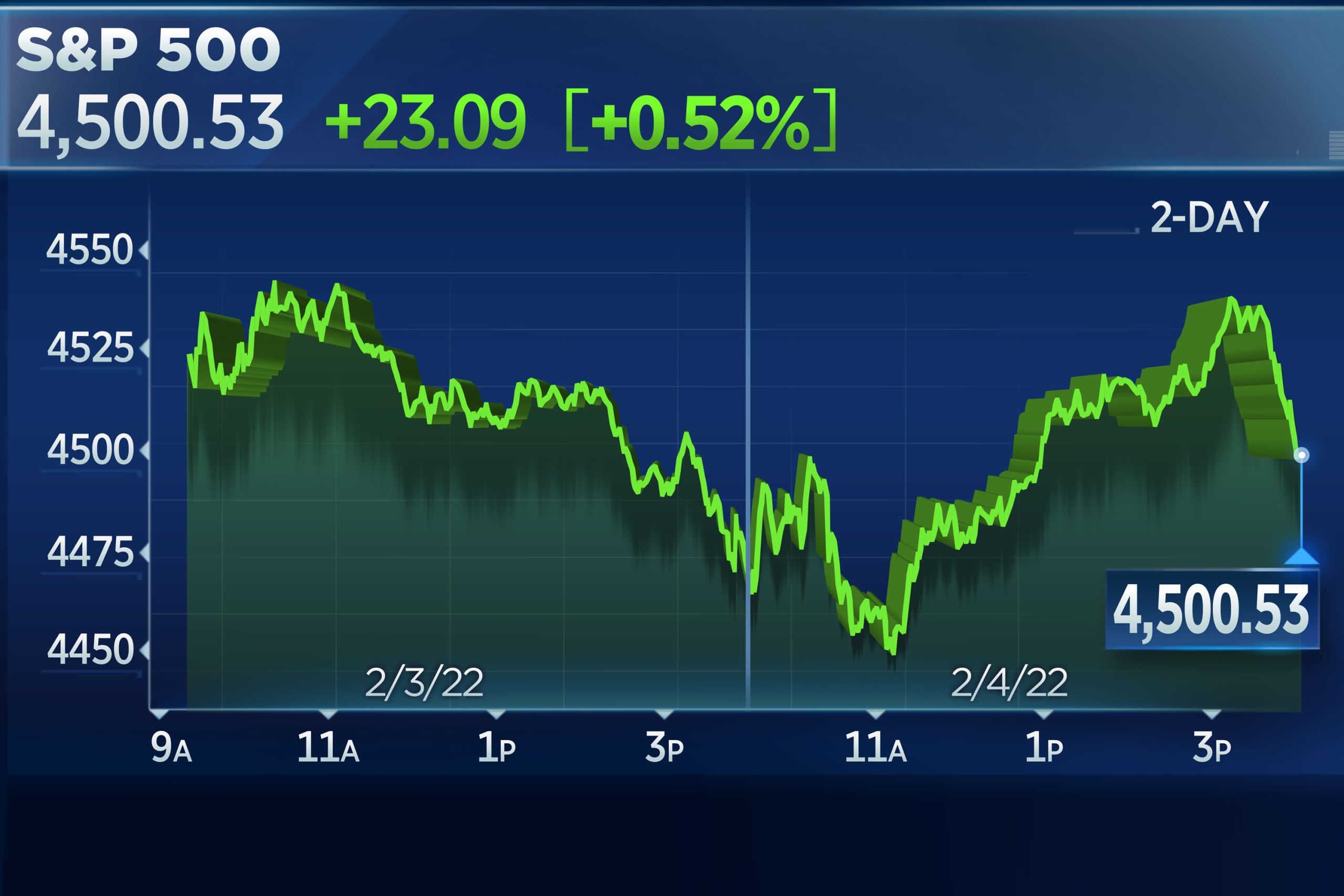 The S&P 500 and Nasdaq Composite jumped Friday to finish their best week of the year, as continued strength in earnings reports extended the tech-led rebound from the January rout.

For the week, the S&P 500 1.5% higher, and the Nasdaq rose 2.4%. The Dow ended the week up 1.1%. These gains mark the second weekly advances of 2022 for the major averages — which were under pressure last month as worries of higher interest rates dragged down tech names.

“We’re in for a choppy period but tech has been picked on for quite some time, and now, a lot of traders are saying this is the time to be constructive, especially on some of these companies that have proven time and again that they’ve been able to manage different types of environments and are providing optimistic outlooks going forward,” like Amazon, Apple and Alphabet, said Edward Moya, senior market analyst at Oanda.

Traders on Friday also weighed a much stronger-than-expected jobs report and its potential impact on U.S. monetary policy going forward.

The 10-year Treasury yield jumped above 1.9%, hitting its highest level since December 2019, after the January jobs report showed a 467,000 gain in payrolls. Economists polled by Dow Jones had expected a minor gain of 150,000, and some economists predicted a large decrease. Economists had cautioned before the report that it could be noisy because of an omicron wave hitting while the survey was taking place.

“For markets, the jobs report is all about the Fed, and today’s upside surprises in both job creation and wage growth keep the Fed on track to begin raising rates in March and hike four or more times this year,” said Barry Gilbert, asset allocation strategist at LPL Financial.

The benchmark yield has jumped from 1.51% at the end of 2021, as the Federal Reserve pivoted to more aggressively fight inflation, signaling it would slow down its bond buying and raise rates several times this year. Higher rates have weighed on stocks, especially tech shares with high valuations. The S&P 500 is down more than 5% this year.

Wall Street was coming off a horrid session in which a plunge in Meta shares dragged megacap tech stocks lower. Meta shares suffered their worst day ever on Thursday, dropping 26.4% on the back of disappointing quarterly earnings.

The Nasdaq Composite, which is tilted towards tech shares, fell 3.7% on Thursday for its worst daily performance since September 2020. The S&P 500 had its worst day in nearly a year, sliding 2.4%, and the Dow fell 518.17 points.

The sharp drop in Meta Platforms, as well as that of Netflix after its earnings last month, could signal weakness under the surface and have bearish implications for the market, according to Adam Sarhan, CEO of 50 Park Investments.

“Some of the megacap tech stocks are trading almost like penny stocks. That is a massive shift under the surface from an overtly bullish market, to a market that could be topping and or the beginning of a bearish phase on Wall Street,” he said.

“For the first time since Covid, we’re seeing a massive, almost 180-degree shift where even if we have growth and strong numbers, stocks are no longer blindly, wildly going up. Instead, they’re going down.”