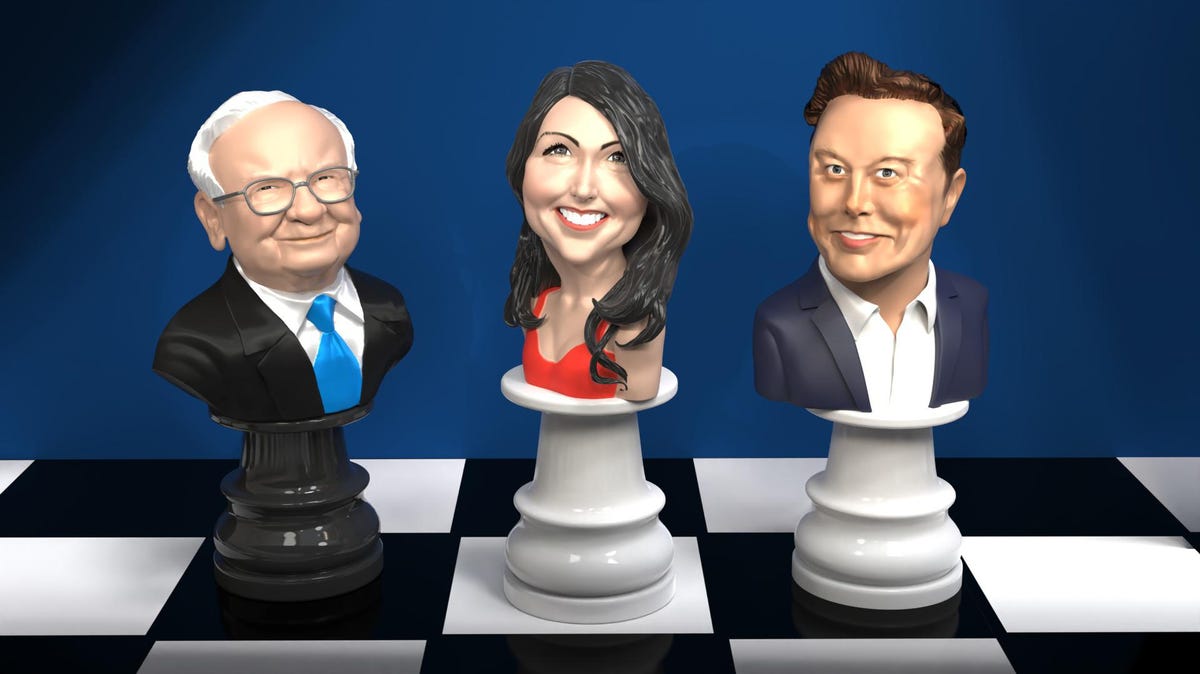 The very top of the very top are $235 billion poorer than a year ago, but they’re still worth a combined $1.6 trillion.

Few have been spared from the pain of soaring inflation and sputtering markets this year, including the billionaires perched at the top of Forbes’ 41st annual list of the 400 richest Americans. As a group, this year’s top 20 are worth $1.6 trillion–$235 billion less than a year ago, accounting for nearly half of the $500 billion lost by the entire Forbes 400.

It’s a sharp reversal from last year, when the top 20 added an unprecedented $500 billion to their collective fortunes as asset prices soared, accounting for nearly 40% of the $1.3 trillion gained by the entire list.

The year’s biggest money loser was Mark Zuckerberg, who dropped out of the top 10 for the first time since 2014 as shares of Meta Platforms (formerly Facebook) cratered by 57%, helping lop nearly $74 billion off his fortune. Eight other top 20 tech billionaires, including Microsoft cofounder Bill Gates and Google cofounders Larry Page and Sergey Brin, shed $188 billion combined.

Despite those staggering losses, the minimum net worth required to land among this ultra-elite group actually rose slightly, to $37 billion (up from last year’s record $36 billion), as six of the top 20 managed to grow their fortunes, including former New York City mayor and Bloomberg LP cofounder Michael Bloomberg, Koch Industries chairman and CEO Charles Koch and Julia Koch, the widow of Charles’ late brother David (d. 2019).

No one gained more than Tesla and SpaceX chief Elon Musk, who tops the 400 for the first time, despite being weighed down by his $44 billion Twitter takeover, which he’s been fighting to void. Musk, worth an estimated $251 billion, is $60.5 billion richer than a year ago, thanks to an 11% increase in the price of his electric vehicle maker’s shares and a fresh funding round that valued his rocket maker at $127 billion. Having overtaken Amazon’s Jeff Bezos as the world’s richest person just weeks after last year’s Forbes 400 was finalized, Musk is now $100 billion richer than his space rival, whose fortune fell by $50 billion, the second-biggest drop among this year’s 400.

Two other gainers, sibling candy heirs John Mars and Jaqueline Mars, returned to the top 20 after missing out in 2021, displacing both of last year’s newcomers (and this year’s only top 20 drop-outs): investor Len Blavatnik (now No. 22), whose stake in Warner Music Group lost nearly 30% of its value in the last 12 months, and Stephen Schwarzman (No. 24), cofounder of alternative investments giant Blackstone.

It’s been a wild year for Musk, who became the first person worth $300 billion in November, before Tesla shares slid amid the broader market selloff and investor fears of a distracted CEO after Musk agreed to buy Twitter for $44 billion. Last November, he also secretly fathered twins with an executive of his brain implant startup, Neuralink. In May, he was accused of sexually harassing a SpaceX flight attendant. Musk denied the allegation.

Knocked from the top spot for the first time since 2017, the Amazon founder and chairman saw his net worth drop $50 billion as the e-commerce giant’s shares tumbled more than 20%. Bezos stepped down as Amazon CEO in July 2021. Through his VC firm, he has invested in everything from digital media company Overtime Sports to Wildtype, which makes seafood from fish cells. In a public setback, his Blue Origin had to abort a rocket launch in September. Meanwhile, Bezos ordered a superyacht so big that shipmaker Oceanco had to request that a historic bridge in Rotterdam be dismantled in order for the vessel to leave. The yacht, which is on the verge of completion, was eventually towed away after intense backlash with the bridge still intact.

In July, Gates announced he was shifting $20 billion of his fortune to the Bill & Melinda Gates Foundation. That big gift accounts for most of the estimated $28 billion drop in his net worth over the past year. Gates, who saw an outbreak like Covid-19 coming back in 2015, released a new book in May: How to Prevent the Next Pandemic.

Ellison, who contributed $1 billion to Elon Musk’s Twitter bid, has reportedly been subpoenaed by Twitter in the messy legal battle over the deal. The Oracle founder also made news in May when it was revealed that he joined a November 2020 conference call to discuss ways to overturn Donald Trump’s election loss. In June, he paid a Florida record of $173 million for a home in Manalapan. Two months later, he listed his North Palm Beach spread for $145 million, less than a year after he paid $80 million for it.

The legendary bargain hunter began the year lamenting a lack of good deals but soon found plenty. In March, Berkshire Hathaway agreed to shell out $11.6 billion for insurer Allegheny Corp. In April, he told investors he had plowed $51 billion of Berkshire’s cash into stocks, including billion-dollar bets on Chevron, Occidental Petroleum and HP. One of the biggest philanthropists in history, Buffett continued his summer tradition of donating billions to charity, giving shares worth about $4 billion to the Gates Foundation, as well as to foundations for his three children and late wife, in June.

The elusive founders of the world’s most popular internet search engine gave up operational control of Google and its parent, Alphabet, at the end of 2019. These days they’re making news for more personal reasons. New Zealand confirmed that Page gained residency in the country, while the press feasted on reports that Brin filed to divorce his second wife in January after rumors of a brief affair with Elon Musk. She denied the allegations, as did the Tesla cofounder, who shared selfies of him and his friend Brin, who kept quiet. In September, Brin announced a $50 million gift over the next five years to help find treatments for bipolar disorder.

The former Microsoft CEO has taken his energetic leadership skills to the NBA, after buying the Los Angeles Clippers for a then record $2 billion from the wife of embattled former owner Donald Sterling in 2014. Since then he’s remade the team into a powerhouse, with a string of winning seasons and a glitzy new arena rising in the shadow of the city’s sporting crown jewel: the $5 billion SoFi Stadium, the high-tech home for the NFL’s Los Angeles Rams. He’s throwing good money after good: The Clippers, long among the worst franchises in the league, are now worth more than $3 billion.

The Bloomberg LP cofounder and former mayor of New York committed $750 million to charter schools last December. In April, he announced that two schools in his home city would receive $100 million apiece. Two months later, Bloomberg Philanthropies joined eight partners in pledging $1 billion to protect the ocean from climate change. Largesse, shrewd tax planning or both? According to leaked IRS data published by ProPublica in April, he paid the fourth-lowest federal income tax rate among America’s top 400 earners from 2013 to 2018 while outearning everyone but Bill Gates.

Walmart shares have lost 11% of their value over the last year as higher costs have dented the company’s profits. Since ceding his seat on the retailer’s board to son Steuart in 2016, the richest of the Walton heirs has remained focused on running the family’s Arvest Bank, which will funnel a sliver of its $27 billion in assets to a University of Arkansas football player as part of a name, image and likeness (NIL) deal announced in August.

Another tough year for Meta, with daily Facebook users dropping amid competition from apps like TikTok. Zuckerberg’s push into the “metaverse” hasn’t been well received either, prompting him to promise “major updates” to graphics following online criticism. Shares are down 57% since last year’s list, helping lop nearly $74 billion off Zuck’s fortune and moving him out of the top 10 for the first time since 2014.

Walton immediately became the richest NFL owner when he outbid groups led by fellow billionaires Josh Harris, Mat Ishbia and Jose E. Feliciano to buy the Denver Broncos in June for $4.7 billion—the most ever spent on a sports franchise. Walton’s consortium includes his daughter Carrie Walton Penner, who replaced him on the board of the family’s charitable foundation, and his son-in-law Greg Penner, who succeeded him as Walmart chairman—as well as former secretary of state Condoleezza Rice and Ariel Investments co-CEO Mellody Hobson, who is married to George Lucas. Walton and his wife, Melani, pledged $100 million last September to help preserve 30 African national parks and protected areas.

Sales at America’s second-largest private company, Koch Industries, reached some $125 billion in 2021, up from an estimated $115 billion a year earlier. A major oil refiner, the Wichita conglomerate has invested more than $2 billion since early 2021 into energy transformation technologies such as electric batteries, energy storage and solar power infrastructure. Last December, a Koch subsidiary reportedly sold a 340,000- acre Montana cattle ranch to media mogul Rupert Murdoch for roughly $200 million. Charles Koch and the family of Julia Koch, the widow of his younger brother David (d. 2019), each owns 42% of Koch Industries.

Walton briefly worked for Walmart as a buyer of children’s clothes in the 1970s but has since focused on philanthropy and collecting art—much of it housed at her Crystal Bridges Museum of American Art in the family’s hometown of Bentonville, Arkansas. She has contributed at least $1.5 billion in cash and Walmart stock to her Art Bridges foundation since 2016. In June, the holistic health institute she founded in Bentonville a year earlier was renamed the Alice L. Walton School of Medicine.

Nearly four decades after a 19-year-old Dell founded Dell Technologies from his University of Texas dorm room, he remains chairman and CEO of the company, which now pulls in $100 billion in annual revenue. Last November, Dell spun off its 81% stake in software firm VMWare; in May, chipmaker Broadcom agreed to buy the company for $61 billion. In a September LinkedIn post, he spoke out against tech CEOs pushing for a return to the office.

Since retiring as chairman and CEO in 2016, the Nike founder has led a $270 million investment for a new track-and-field stadium at the University of Oregon, his alma mater, and is said to be personally involved in talks for its teams to join the Big Ten conference. Earlier this year, he reportedly made a $2 billion offer for the Portland Trail Blazers that was rebuffed by the estate of Microsoft cofounder Paul Allen (d. 2018).

Since her 2019 divorce from Jeff Bezos, Scott has been dropping billions at breakneck speed. She has given away $4 billion since last summer, including $281 million to the Boys and Girls Club of America and $275 million to Planned Parenthood. In August she donated two Beverly Hills mansions, worth $55 million, to the California Community Foundation, which will sell them and use the proceeds for affordable housing and immigrant integration efforts. In all, Scott has donated $12.6 billion since June 2020.

Their candy giant, Mars Inc., is getting a new CEO at the end of September, as longtime executive Grant Reid steps down after helping more than double its sales to $45 billion in eight years. The secretive siblings, whose grandfather created the Milky Way bar in 1923, together own an estimated two-thirds of Mars Inc. Jacqueline helped fund a sculpture of 140 migrants and refugees that was recently unveiled in a plaza at the Catholic University of America in Washington, D.C.