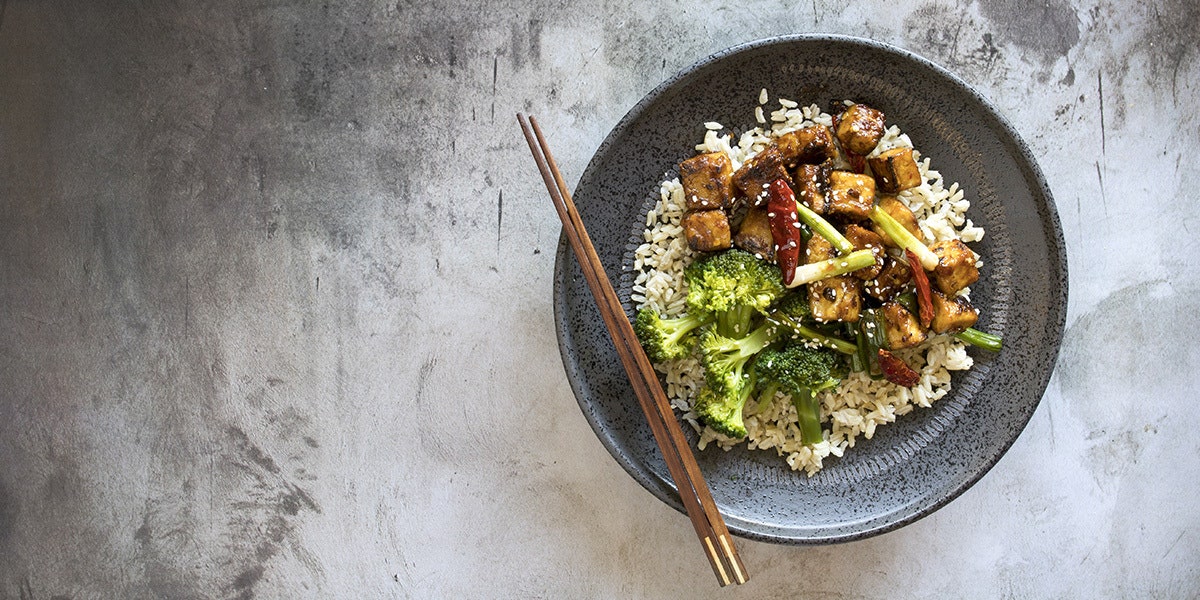 If you’re bored with cereal and PB&J for those nights where you just can’t bring yourself to cook, might we suggest healthy frozen dinners as another possible alternative—especially if you’ve already maxed out your takeout budget?

Yes, frozen entrées don’t have the best reputation—mushy textures, not much flavor, loads of sodium, skimpy portions, etc.—but it’s far from fully deserved. Now more than ever, there are plenty of legit tasty options made from wholesome ingredients that will actually leave you satisfied. And registered dietitians agree that it’s worth keeping a few of the best frozen meals in your freezer for when things get hectic (or, to be honest, you just don’t feel like cooking).

“High-quality frozen dinners can be great,” Phoenix-based nutrition expert Rhyan Geiger, R.D.N., tells SELF. “They come in handy on a busy night when home cooking isn’t an option or used as a backup plan if a meal falls through.”

All frozen dinners are definitely not created equal, though. That’s why there are some factors you might want to consider before stocking up to make sure you’re making the most of your healthy microwave meals—and that they will keep you full for the long haul.

How to choose a satisfying frozen meal

1. Make sure it contains enough calories.

The serving sizes for healthy frozen dinners can sometimes be a little puny, making them feel more like a snack than a meal. Look for options that offer the caloric equivalent of the meals you’d make for yourself, Kelly Jones, M.S, R.D, C.S.S.D, a sports nutritionist based in Philadelphia, tells SELF. If a meal has less, consider how you’ll enhance it to make it more filling. For instance, add sliced avocado on top of a frozen burrito or sprinkle chopped nuts on top of a grain bowl.

2. Fill in the nutrition gaps with easy staples.

You want a meal that not only contains enough calories, but is well-rounded and balanced. “Look for a meal that contains carbohydrates, proteins and fats,” Yasi Ansari, M.S., R.D., C.S.S.D., a Los Angeles-based sports dietitian and national media spokesperson for the Academy of Nutrition and Dietetics, tells SELF.

And if your fave frozen meal doesn’t quite measure up, fill in the gaps with pantry staples or pre-made basics to make it a complete meal. “Find ways to boost nutrition by adding what may be missing,” Ansari says. Some of Ansari’s favorite frozen food brands, for example, tend to run low on the carbs, so she always adds some of the pre-made brown rice, potatoes, or quinoa she keeps on hand.

3. Look for plenty of protein and fiber.

Protein and fiber work together to help you feel fuller longer, so make sure your meal has both, all of our experts said. Try to choose options that offer at least 15 to 20 grams of protein and 5 grams of fiber per serving.

A lot of frozen meals tend to go heavy on the salt, which can make it hard to keep your overall sodium intake in check. (The American Heart Association recommends most adults take in no more than 2,300 milligrams per day for a heart-healthy diet.) For heart-healthy choices, try to stick with relatively low-sodium frozen meals, meaning less than 600 mg sodium per serving, Jones says. (Although the exact number to aim for will depend on your individual health.)

Rounding out your healthy microwave meals with another serving of produce adds an extra shot of fiber and nutrients (and also boosts the fullness factor). “I always recommend pairing a frozen meal with a heaping serving of greens,” Maya Feller, M.S., R.D., an adjunct professor of nutrition at New York University, tells SELF. Sauté some frozen spinach with olive oil and garlic while your entrée is baking, microwave some frozen peas or broccoli, add a side salad, or have a handful of kale chips.

When your food looks appetizing, you’re more likely to come away from the table feeling satisfied, Rachel Naar, M.S., R.D., a New York City–based dietitian who specializes in intuitive eating, notes. Put that meal on a real plate or in a bowl instead of eating from the package. Add a sprinkle of chopped fresh herbs, if you have any around. And if your plate is looking a little monotone, add some color fruits or veggies, Ansari says.These little moves can make a pinch hitter meal feel a little more special.

What are some easy frozen meal options to have on hand?

You’ve got lots to choose from. Here are eight picks R.D.s love—including a few budget-friendly meals under $5—plus their tips for turning healthy frozen meals into maximally satisfying weeknight dinners.

A note about the word healthy here: We know that healthy is a complicated concept. Not only can it mean different things to different people, but it’s a word that’s pretty loaded (and sometimes fraught), thanks to the diet industry’s influence on the way we think about food. At SELF, when we talk about food being healthy, sure, we’re talking about foods that are nutritious, filling, and satisfying. But we’re also talking about foods that help you connect with your culture, promote joy, and simply taste delicious. Some of those foods might fall into conventional ideas of what “healthy” is. And some might not. We rounded up these meal recommendations with all of that in mind while also trying to appeal to a wide variety of nutritional needs and taste buds.

Ian reaches major hurricane status, will be a historic storm for Florida