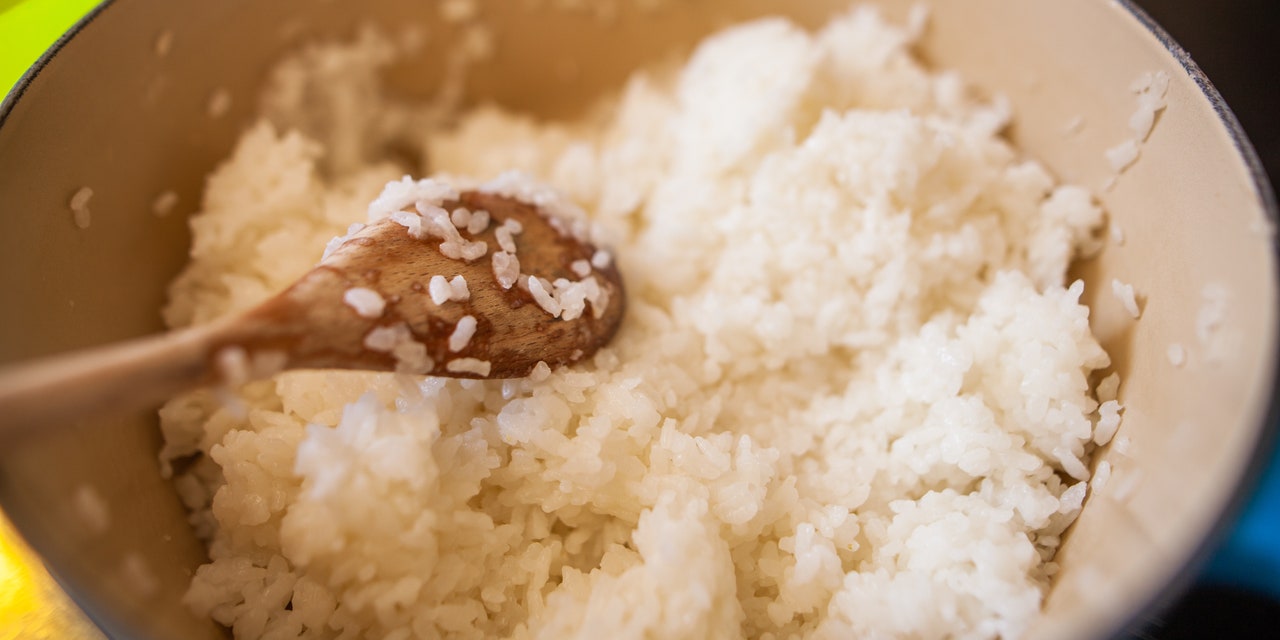 We all know what happens when you overcook rice: Rather than a mound of fluffy, carb-y deliciousness, you end up with a layer of dried-out grains stuck to the bottom of your pot. It’s not good.

Overcooking rice—and getting it glued on to your cookware—is so, so easy to do. As someone who manages to cook my rice for too long a solid half of the time, I’m all-to-familiar with getting stuck with a ruined dinner (and a pot that’s more than a little worse for the wear.) When I complained about this to a kitchen-genius friend of mine, they provided a suggestion I hadn’t heard of before, one that would save my pot and my dinner: Put your scraper down, and instead encourage the rice to unstick themselves.

You do that by turning off the heat, adding a teaspoon or two of water to the pot, clamping the lid back on, and letting the rice sit undisturbed for 10 minutes. Forget about trying to scrape the singed grains off the bottom of the pot, and instead wait for time to do its thing. Afterward, like magic, my friend said, the rice would not only get unglued from the bottom of the pot, but all of the grains would also be perfectly salvageable for eating.

I was skeptical at first that this would work. But the next time I burnt my rice—ahem, just three days later—I decided to give it a try. And it legit did the trick!

Thanks to my kitchen-savvy pal, I was now in possession of an invaluable cooking hack that has saved mealtime time and again.

Since I’ve never heard of this trick before—and I’m a food writer!—I wanted to see if it was pure luck, or if there was really something behind the hack. So I tapped Barbara Rich, lead chef of culinary arts at the Institute of Culinary Education in New York, to see what’s going on here.

According to Rich, the steam was the star here. Adding the extra water to the rice provided more liquid to allow the grains to keep steaming, and that steam was helping the grains become unlodged from the bottom of the pot. The result? No more stuck-on rice.

Still, says Rich, it’s not exactly a perfect fix: “The end result might be a little bit squishy or mushy,” she added. That’s because you’re adding more water to the rice and letting it steam for longer.

TBH, I never noticed any mushiness. The rice still seemed to have a good consistency to me—I was able to eat it with my usual stir-fries or bean bowls no prob—but then again, I’m no rice expert (clearly!). Rich says that while my method was okay, I could definitely be doing better. For starters, I could just scoop off the part of the rice that wasn’t stuck to the pot and eat that, then use my water trick just to remove the stuck-on rice and get my pot clean.