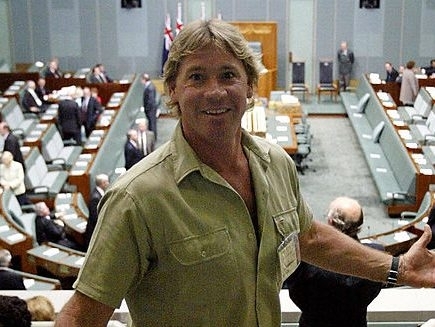 Crikey! It seems that many Australians would prefer to have the late crocodile hunter Steve Irwin on their currency than another royal.

There’s been debate in many countries that feature Queen Elizabeth II on their bank notes but with talk of King Charles III replacing her, there are people who have other ideas.

Vincent Wu and Kirby Miles have started two separate petitions in a bid to have the wildlife icon and TV personality on the $5 note.

“The Reserve Bank of Australia writes that the ‘Banknotes offer an opportunity to honour Australians who have made important contributions to the nation,’ reads Wu’s petition page.

“There is no one more vital to the Australian culture and identity than Steve Irwin,” he continued. “Steve is beloved by all and has become synonymous with the Australian values we hold so dearly. He epitomised the spirit of mateship; he deeply loved the Australian Wildlife, working hard towards conservation and education but perhaps most importantly he’s just a good bloke.”

Wu concluded, “This should not be seen as a step away from the crown, but as a step towards honouring a beloved Aussie hero. There is so much more that could be said about Steve but it comes down to this: we ought to honour a true Aussie hero.”

It could happen. According to Sky News, Assistant Treasury Minister Andrew Leigh revealed last month that Charles would not necessarily be the replacement on the $5 note.

While Leigh said new coins will feature the new monarch “as a matter of tradition,” the same isn’t the case for Australia’s bills.

“The decision to include the Queen’s face on the $5 note was about her personally rather than about her status as the monarch so that transition (to Charles on the note) isn’t automatic,” he said.

Irwin died in September 2006 after being pierced in the chest by a stingray barb while filming in the Great Barrier Reef.

Irwin’s children, Bindi and Robert, along with wife Terri have continued to honour Steve by expanding and nurturing his legacy, Australia Zoo.