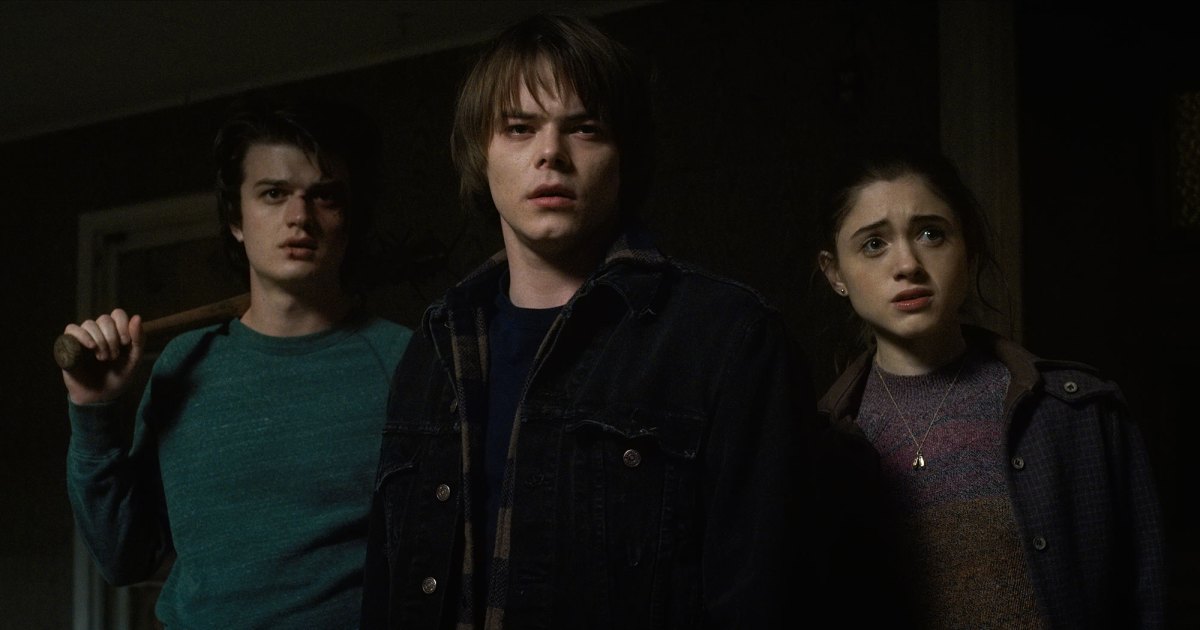 “For me, this show is much more about the characters and the relationships,” Natalia Dyer, who plays Nancy Wheeler, said about the Netflix hit during an interview with Glamour in 2017. “I find it’s very character-driven. The Duffers take these ’80s tropes and really flesh them out and give the characters complexity. I love how everyone relates to each other, and it’s fun to see how they do it in different ways.”

One of the biggest focal points of the series, which premiered on the streaming platform in July 2016, has been the love triangle that exists between Nancy, Steve Harrington (Joe Keery) and Jonathan Byers (Charlie Heaton). While season 1 saw Nancy falling for shy guy Jonathan despite dating Steve, season 2 revealed that the budding journalist was still holding back her feelings for the eldest Byers son by digging deeper into her relationship with Hawkins’ most popular jock.

“At the end of season 1, we were kind of pretending that nothing happened,” Keery said to Glamour in 2017 about the surprising twist. “We were holding each other back in a certain way — but in order to move forward, we had to go to these separate places.”

Nancy eventually found her way to Jonathan in season 2 following a Halloween night of spilled punch and “bulls–t” between her and Steve, but Dyer and Keery aren’t convinced that their characters won’t one day reignite their dimming flame — after growing on their own first.

The Molly’s Game actor, for his part, explained to Us Weekly at the season 2 Stranger Things premiere in October 2017: “I think everybody sort of still has feelings for that one person in some way or the other. You respect them. You think about them. You think about it fondly or think about it negatively. I think that Steve and Nancy are the same way. I think, or at least I hope that people find the humanity in the situation.”

Heaton revealed to Refinery29 in 2019 that he’s “actually pretty pro-Steve.” The New Mutants actor added that the former ladies’ man has “turned into a really nice guy” despite playing his rival on the show, but Heaton clarified that the bond Nancy and Jonathan share remains something special for the series.

“They can and do rely on each other,” he said about the onscreen couple at the time. “They’re very different people. But when it matters they are there for each other.”

The bond between the brainy beauty and introvert didn’t just spark an onscreen romance. Dyer and Heaton fell in love behind the scenes following the release of season 1 in July 2016. While the couple are notorious for keeping quiet about their relationship, Dyer did opened up about her beau at the 2018 SAG Awards.

“No, he’s great. He’s talented, like everybody in the cast,” she told Us at the time. “They’re all super, just great to work with.”

While the pair are still going strong after six years of dating and being costars, the Tennessee native still struggles to understand why people care about their romance at all.

“The weirdest thing about [our relationship] is other people’s perception and reaction to it,” she said in a May 2022 interview with Cosmopolitan UK. “Everything else just feels very human.”

Scroll down to relive the iconic love triangle between Nancy, Steve and Jonathan through the seasons: