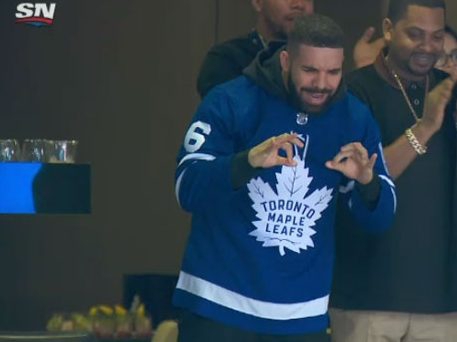 The Toronto rapper revealed on his Instagram Story last week that he was plunking down $400,000 in his belief that the first-round NHL playoff series would stretch to seven games. After Toronto lost 4-3 in overtime, Drake walked away with $1.2 million.

On May 3rd, Drake posted his @Stake stub on IG — a $400K bet that the Maple Leafs-Lightning series would go seven games.

It’s important to note that the Hotline Bling star hasn’t made public any wagers on Game 7 — yet. But Drake has a history of publicly embracing the teams he loves. As the global ambassador for the Toronto Raptors, the Grammy winner is a fixture at NBA games, including the club’s Game 6 loss to the Philadelphia 76ers last month.

And Leafs fans might really want Drake to sit this one out. The team hasn’t advanced to the second round since 2004 and is now 0-8 in elimination games over the last five playoffs.

In year’s past, Drake’s endorsement of sports teams has been unscientifically proven to show that they are headed for failure.

In 2019, he showed up during Game 4 of the NHL playoffs between Toronto and the Boston Bruins in Maple Leafs gear and guess what? The Leafs lost 6-4.

Then-Leafs coach Mike Babcock weighed in on talk of a curse post-game. “I’ve heard lots of things since I’ve come here, but that’s one of the craziest things,” Babcock said when asked his thoughts on the curse. “The game is played on the ice by us. There’s no curse whatsoever.

“Anytime anybody wants to come and support us, we’re all in.”

But the “Drake Curse” has also been blamed for losses suffered by the University of Alabama, Serena Williams, Conor McGregor and Paris Saint-Germain.

More recently, Drake bet on pal Kevin Durant’s Brooklyn Nets to beat the Boston Celtics (they were swept after losing 116–112 in Game 4). Last weekend, he plunked down $427,000 on MMA fighter Justin “The Highlight” Gaethje to beat Charles Oliveira at UFC 274 (Gaethje lost).

After he lost $275,000 on Jorge Masvidal at UFC 272 in March, his opponent Colby Covington trolled the singer for his loss. “Let’s talk about all the money Drake lost tonight,” Covington said. “He needs to go back to selling those s—– albums to get back the money.”

When the pandemic-shortened NHL season began last year, the London, Ont.-born singer boastfully predicted the Leafs would be hoisting Lord Stanley’s Cup for the first time since 1967.

“This is the year,” he declared alongside an image of the team’s crest.

But after cheering on the Leafs virtually all season long, regularly posting encouraging messages on his Instagram page, he was quiet during the team’s first round matchup against the Habs, which Toronto lost after blowing a 3-1 series lead.

“The Leafs lost because Justin Bieber hasn’t posted a random old Leafs logo on Instagram in a while,” one person theorized.

So wait, maybe what Leafs Nation should be hoping to see on social media over the next few days is: Drake making a huge wager on the Lightning and Bieber taking to Instagram to declare, “Did I say, last year was the year? I meant this is the year.”

Or maybe the team will put its playoff demons to bed once and for all.

In an interview with the Sun early in the season, Leafs all-star centre Auston Matthews said the team had learned from its past post-season missteps.

“I know for us we have the belief in ourselves, and we feel we will get it done and we’re going to break through. Regardless of our failures, champions and legends are made of how you respond to failure, not success,” Matthews said.

We’ll find out Saturday night when the puck drops between the Leafs and Lightning for Game 7 at Scotiabank Arena.