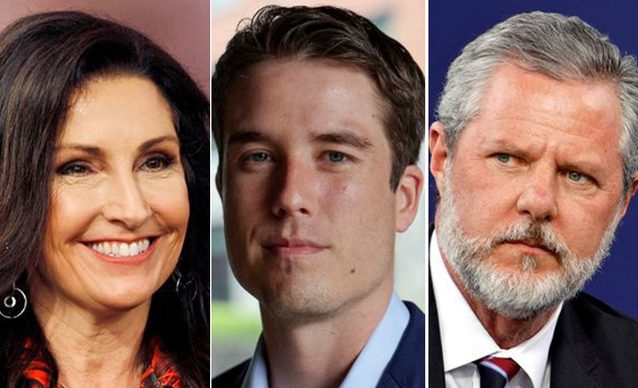 The wife of disgraced holy roller Jerry Falwell Jr. claims she made sex tapes with the couple’s much younger pool boy.

In an explosive interview with Vanity Fair magazine, Becki Falwell paints a sordid picture of her life with Falwell Jr., the former leading light of controversial Liberty University, and her dalliances with pool boy Giancarlo Granda.

“I had a big Canon camera. A couple of times I put it on the dresser and Giancarlo agreed to it,” the 54-year-old told the glossy magazine, adding her husband was unaware of their cinematic escapades.

Jerry Falwell Jr.’s tenure as university president sank when the hormone-charged hijinks were revealed. Granda claimed that Falwell Jr. enjoyed watching him have sex with his wife, claiming they were a “throuple.”

Falwell Jr., 57, told the magazine he once walked in on the pair having sex and was “traumatized” by the sight. He denied the trio were engaged in a polyamorous relationship.

And even after the affair had ended, Becki said Granda pressured her into having sex in her daughter’s bedroom.

“He said he wanted to have sex and I said, ‘No, no, no.’ I kept saying no. I didn’t want to do it,” Becki said. “But I was scared to death of him too, because he was still holding everything over me, so we had sex. He left and I went into the room and just cried.”

Becki met the young pool boy at a Miami hotel when he was 21 and things progressed from there. She now believes that Granda may have sexually assaulted her.

“I said no. Just because we had sex before does not mean he has a free ticket to my body,” she told the magazine.

Granda denied the claims when contacted by Vanity Fair.

Jerry Falwell Jr. was one of the most influential conservative Christian leaders in the U.S., and a friend of former President Donald Trump.

He said the couple decided to make the affair public because Granda was blackmailing them about keeping the amorous antics a secret — box office poison in the world of evangelical Christianity.

“Jerry would wake up every morning and worry that my affair would come out. Both of us did,” Becki said. “It’s just horrible to have that over you.”

The affair ended in 2014 with Becki giving the pool boy the heave ho because he had a girlfriend.

“I felt guilty about it. I didn’t want to keep it up,” she said.

Falwell Jr. said Granda then demanded $2 million to keep the affair a secret.

According to Becki, the couple have worked through their difficulties.

“We’re together more than any couple you will ever meet in your life,” she said. “He forgave me, and that’s what Jesus teaches, forgiveness.”