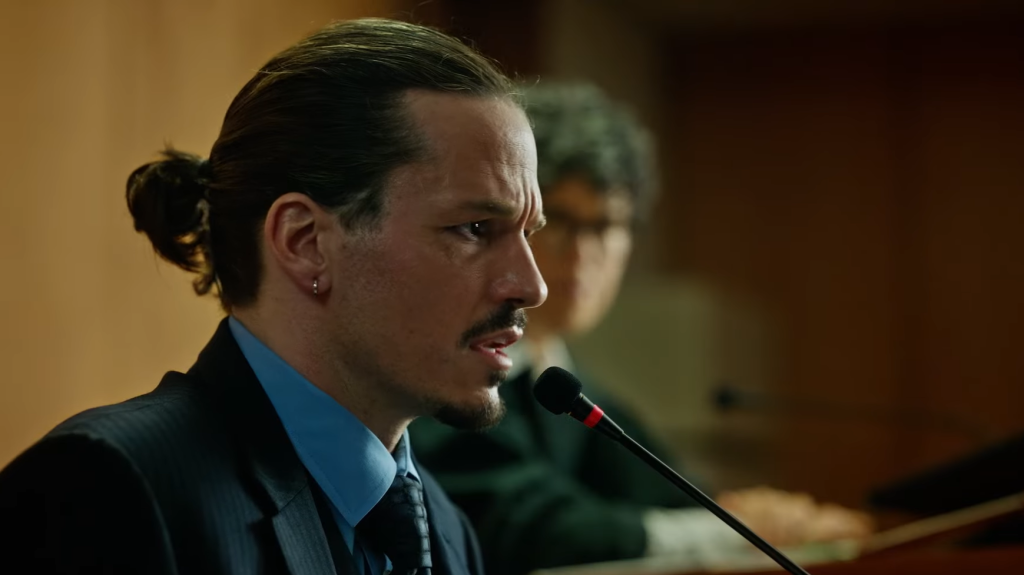 “Hot Take: The Depp/Heard Trial” sounds like the tawdriest of TV-movies, with any vestige of shame left on the cutting-room floor. It definitely is that, yet it’s worth noting that this exact sort thing has been around for decades. It just didn’t used to come off the assembly line quite so quickly. In the ’70s, ’80s, and ’90s, the landscape was littered with made-for-TV movies that jumped on tabloid-ready stories — The Jacksons! Jim Jones! The Menendez brothers! The Beverly Hills madam! The rape of Richard Beck! — and squeezed out whatever juice was left in them. “Hot Take” isn’t much different. It feeds on our collective desire, which is apparently limitless, to see adequate-but-not-never-good-enough actors acting out the infamous scenes we’ve read or heard about, bringing those squalid episodes to life. Except that the whole problem with this form is that the dramatized version rarely ends up looking half as real as what was in our imaginations.

The title of “Hot Take: The Depp/Heard Trial” makes the movie sound loopier than it is. You may think you’re about to see an entire staged version of the trial we basically just saw, as if watching Mark Hapka and Megan Davis, who play Johnny Depp and Amber Heard, seated on the witness stand reciting the tidbits of testimony that somehow became memes before they were out of Depp and Heard’s mouths would somehow provide a frisson of revelation that watching the original trial did not.

But no. “Hot Take” uses the trial as a kind of framing device — and yes, it does keep returning to the courtroom personas (Johnny’s Kentucky-meets-the-Actors Studio stentorian gravity and self-involved Zen stammering; Amber’s corporate control-freak guardedness) that we all grew to love so much. Yet the film will then cut to a flashback triggered by the snippet of testimony in question. The heart of the movie is its episodic portrayal of the Depp/Heard romance-gone-crash-and-burn, a soap opera on bad drugs and even worse recall.

If you think you’re going to get some version — or at least an interpretation — of “what actually happened,” you’re out of luck. Instead of choosing sides, the movie, cued to Johnny and Amber’s contradictory testimony, dramatizes her version of the story…and then his…then hers…then his… “Hot Take” is like “E! True Hollywood Story: The Depp/Heard Trial” acted out on the cheap — a he said/she said schlock “Rashomon” with the contrasting versions of what happened overlapping each other, so that by the end we hardly know which way is up. But we’ve gotten to see most of our pet moments come rotely alive.

Here’s Johnny and Amber as they meet, all lovey-dovey, on the set of “The Rum Diaries,” sharing the red wine he drinks like it was the blood of Dracula. Here’s Johnny charming Amber with his Brando impersonation, bedazzling her with his ornamental masculine charisma, as he is woken up by her adoring gaze. Here they are already getting into little tiffs about things like the movie roles Amber is taking (he calls them “demeaning”). Here, right after their wedding, in the middle of her bachelorette party, is a major fight, because Johnny doesn’t like that Amber and her girlfriends are doing drugs (coming from the drinker he is, that’s quite a high-handed piece of hypocrisy) and he says that she lied to him about the sex scene she did with Eddie Redmayne. (The way the film portrays it, Johnny is so jealous that he experiences even sex scenes as if they were betrayals.)

More seriously, here’s Johnny, in a re-enactment of Amber’s testimony, becoming physically abusive after she makes a joke at the expense of his Wino Forever tattoo. And here, in a re-enactment of Johnny’s testimony, is the far more tender, completely unabusive encounter about that tattoo that he described. Here’s Amber on the red carpet with scars on her arm (but are they real?), and here, as the 85-minute movie veers into its climactic home stretch, is severed-fingertip-gate and poop-gate.

If you got addicted to the trial and watched the whole goddamn thing (true confession: I did), you inevitably, over time, developed a psychological profile of each person, which led you to decide who was lying about what, and to come up with an interpretation of where you thought the trial deserved to land, in terms of legal justice. But really, the trial was a warped lens that all of us peered through, trying to take in the full picture of Depp and Heard’s obviously toxic relationship. (This tended to result in such pinpoint gems of trenchant analysis as, “They were both fucked up.”) “Hot Take” is like a second warped lens slapped on top of the first one. It doesn’t clarify; it literalizes yet blurs.

How are the actors? As Depp, Mark Hapka looks the part (sort of, from certain angles, sometimes), but not really, because how could anyone? Hapka is also a little too neutral in the courtroom episodes — the real Johnny leaned into those theatrical low tones — but he captures, in the romantic scenes, how Johnny was a romantic about everything, but only on his own (unromantic) dominating terms. Megan Davis does a convincing impersonation of Heard, but to the extent that the trial caught Heard in duplicitous statements, like her insistence that she’d fulfilled her pledge to make a $3.5 million donation to the ACLU, the film doesn’t really allow Davis to show you how that side of Amber worked.

The real (bad) joke of “Hot Take” isn’t that it’s the scuzziest TV-movie ever made or anything like that. Quite the contrary: As ripped-from-the-headlines exploitation sleaze goes, it’s fairly standard. But it does one mildly innovative thing. It takes the social-media circus that surrounded the Depp/Heard trial and works it right into the movie. It keeps intercutting staged versions of postings from a pro-Amber YouTube pundit, a Johnny Depp teen-girl stan, and the various other DIY commentators and satirists who turned the trial into not just a riveting piece of reality theater but the most telling Warholian sideshow of the 21st century. Its ruling ethos was, “Everyone who has an opinion of the Depp/Heard trial will be famous for 15 milliseconds.” That’s a whole lot of power-to-the-people tabloid feedback, and even as “Hot Take” acknowledges it, it makes this movie just one more drop in an ocean of noise.