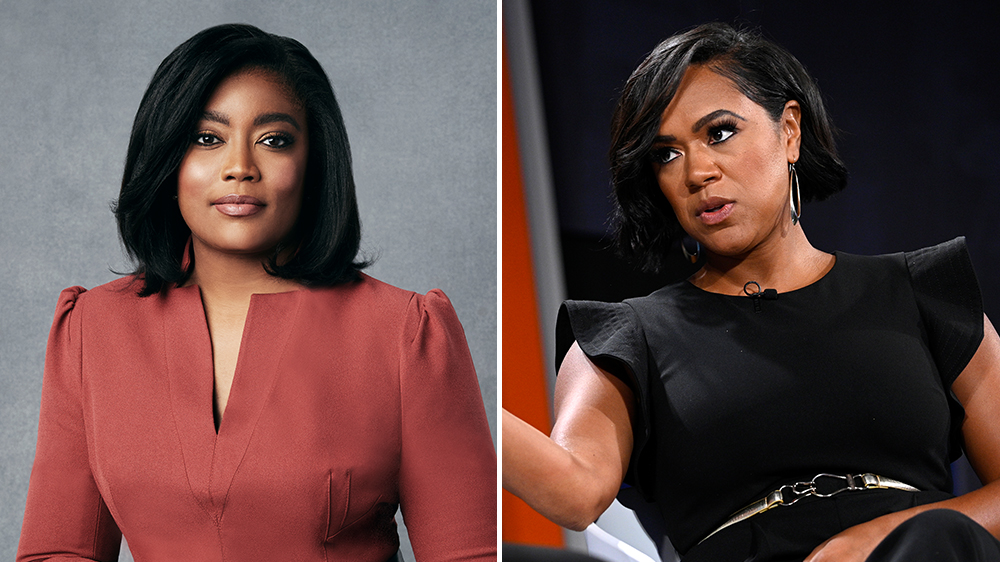 November 7 was a particularly busy Monday at “The View.” The long-running ABC talk series was prepping the show for the day before the midterm elections — a nail-biting event that ended up with the Democrats retaining control of the Senate and Republicans taking the House.

To bolster the show’s panel, led by moderator Whoopi Goldberg, Nicolle Wallace was joining as a guest to discuss a new series she hosts for Peacock surrounding mental health awareness. As a former member of “The View,” Wallace was no stranger to the Upper West Side Manhattan studio where the show is filmed, but the woman she brought as her plus-one surprised numerous staffers and talent. Wallace, who currently hosts MSNBC’s “Deadline: White House,” arrived that morning accompanied by Rashida Jones, her boss and the president of MSNBC.

Jones is known to have accompanied some MSNBC talent to other media appearances, even on rival networks. But the visit to “The View” nonetheless raised eyebrows in the news biz.

“It’s beyond odd that the head of a rival news operation at a different network would come to ‘The View,’” noted one source with knowledge of the visit. Another individual present that day agreed it was “bizarre” that a top executive from NBCUniversal would step foot inside ABC. While Wallace was on hand to discuss her series, Jones had a different hot topic in mind, four sources aware of her dealings that day said — it was Tiffany Cross, the outspoken MSNBC anchor who Jones had abruptly fired three days earlier.

Cross was the firebrand weekend host of “The Cross Connection,” a host who’d drawn the ire of rightwing pundits such as Tucker Carlson, and had also raised eyebrows — both internally, and among some viewers — with her blunt on-air comments about political figures like Supreme Court Justice Clarence Thomas. Cross’ firing has been the subject of numerous conversations initiated by Jones with elite media figures in recent weeks, nearly a dozen individuals interviewed by Variety said. Many of the sources who spoke to Jones, a rare Black female leader in the sector, felt her efforts to present her case to industry insiders underlined how controversial the decision was to fire Cross in the first place. Some are concerned that Cross was unfairly penalized for being an outspoken Black journalist.

Bryan Freedman, the high-powered attorney Cross retained after her ouster from MSNBC, told Variety that Jones’ behavior was harmful to his client. “There’s one kind of wrong in going around trying to justify one’s unjustifiable behavior. But, at Rashida’s level, in doing so, what she’s actually doing is defaming Tiffany in the process,” Freedman said.

MSNBC sees it differently. “MSNBC made a programming decision to cancel the show,” a spokesperson for the network told Variety. “The news group makes these business decisions all the time.”

Sources close to the situation say Jones was concerned that Cross ignored her directives to stop taking on rival cable and radio personalities during her show. In the end, Jones felt that as a leader she had to address insubordination. Other insiders familiar with Cross said only one such directive was ever given, two weeks before she was fired.

Yet the response to Cross’ firing from viewers, social media users and the activist community was intense. Cross trended on Twitter for days following her firing. More than 40 prominent Black figures demanded a personal meeting with Jones to explain Cross’ firing on the eve “a critical midterm election,” and to discuss “a path forward that is restorative to the reputation and dignity of Ms. Cross,” reported Semafor.

With no shortage of damage to control, Jones walked the halls of “The View” in pursuit of Goldberg first, sources said. Appearing at the door of her dressing room door, Jones encountered Goldberg in final touches of hair and makeup while reviewing her notes for the day’s show, said the sources. Jones requested Goldberg’s staff leave the room so they could have a private conversation, which Goldberg declined, sources said. Another “View” insider present categorized the meeting as a “quick hello.”

Unfazed, Jones moved on and waited out most of the taping before requesting to speak with “View” co-host Sunny Hostin. Roughly 10 staffers witnessed Hostin, an attorney and former legal analyst for ABC News, step off stage and speak with Jones in a hallway before the conclusion of the broadcast, sources said. Jones was overheard explaining to Hostin that she had issues with Cross’ on-air “tone” for close to a year before her termination, three insiders familiar with the exchange said.

After assessing Jones’ unexpected appearance on their set, some higher ups at “The View” speculated that she had come that day with one goal: to avoid getting mentioned in the popular “View” segment Hot Topics, during which the panelists engage in oft-heated debate and throw down strong opinions. Other insiders familiar with with the taping denied this was Jones’ motive. A well-placed insider at “The View” said the Cross story was in the mix to appear in that day’s Hot Topics segment, but did not make it to air in favor of other stories. The source added it had nothing to do with Jones’ presence.

A spokesperson for “The View” declined to comment on the matter.

Other sources disputed that Jones and Hostin’s conversation was about Cross, and said she was acting in a supportive capacity to Wallace as she retuned to her former workplace. The insiders noted that Jones made a January visit to CBS’ “The Late Show With Stephen Colbert,” alongside Joy Reid. In May, Jones also accompanied MSNBC contributor Jen Psaki to “The Tonight Show Starring Jimmy Fallon” on sibling network NBC.

But the message that Cross was a longtime problem was echoed by Jones in her outreach over the past weeks, sources added. At least three of those talks were held with other media figures, one a former prominent magazine editor, sources added. Insiders at “The Cross Connection,” however, pointed to only one written communication in which Jones reprimanded Cross for her tone. That came on Oct. 16, the sources said, following a segment Cross hosted regarding Justice Thomas. Airing on Oct. 15, the segment aimed to examine Thomas’ legacy, but was peppered with references that wonky blogs called vulgar and mocking. This included referring to Thomas as “Justice Pubic Hair on my Coke Can,” referring to testimony from Dr. Anita Hill two decades ago in which she accused the judge of sexual harassment. She also referred to Thomas as “Commander Waterford,” the fascist rapist played by Joseph Fiennes on Hulu’s “The Handmaid’s Tale.”

In her communication to Cross, Jones expressed she was “disappointed” in her language on the segment and said the piece did not meet network standards. She also set up a conversation with NBCUniversal human resources. An MSNBC spokesperson would not comment on internal HR matters, nor would they clarify what, if any, new protocols for “The Cross Connection” emerged from those talks. Sources with knowledge of MSNBC insisted that Cross was spoken to by numerous individuals over the past year about her on-air tone, though they would not offer any specifics on who and when. The letter from Jones was the first and only sign of a tonal issue, other sources maintain.

However you might classify Cross’ tone, her particular brand of outspokennnes had helped her win a bake-off for the weekend host slot against two other hopefuls in 2020. She took the job that year — a seat that had been vacated by anchor Reid, who moved to weeknights. In announcing her eponymous show, Cross promised to “touch on politics, culture, humanity, and the inhumanity of some yet-to-be-addressed disparities.” She also pledged to place Black women at “the center” of her program. What followed was a series of blunt and headline-grabbing segments and appearances by Cross in a news cycle rife with discourse over (and outward displays of) white supremacy. Notable sound bites from Cross included an interview with radio personality Charlamagne Tha God calling the state of Florida the “dick of America,” one that should be castrated. Comments like these led to extreme reactions from media personalities on the right, including Megyn Kelly, who has called Cross a “dumbass” and the “most racist person on TV.”

By far the most incendiary reaction to Cross was from Fox News’ Carlson. On Oct. 19, four days after Cross aired her Clarence Thomas segment, Carlson accused Cross of inciting a “race war” with her commentary. He even likened her broadcast to the Rwandan radio station that played a significant role in the country’s 1994 genocide. In the days following Cross’ firing, reports speculated that Jones had handed Carlson and Fox News “a win” by terminating her.

“No other cable news show regularly examined the many ways that white supremacy is embedded structurally and historically throughout American society,” wrote Salon in an analysis of her firing.

At the top of the year, “The Cross Connection” attracted around 4.6 million monthly viewers, according to an internal research document issued by NBCUniversal and obtained by Variety. Cross’ audience skewed 55% female and 35% Black, an audience intersection that MSNBC has been chasing, Variety reported earlier this month. All told, Cross’ program was MSNBC’s most-watched by Black viewers, second only to “Politics Nation With Al Sharpton.” The week before her termination, according to Nielsen media research, she averaged 605,000 viewers in her time slot and rated third behind competitors CNN and Fox News.

Jones’ defenders called her a fierce advocate for diversity, having hired or elevated journalists of color including Katie Fang, Alex Wagner and Symone Sanders to anchor roles. For many industry observers, the situation has been heightened by the fact that two prominent Black women journalists are at public odds.

“I don’t want to see someone like Tiffany move backwards, and I don’t want there to be a double standard for Rashida,” Rev. Al Sharpton, the host of MSNBC’s “Politics Nation,” told Variety.

Cross’ future is unclear. The question she has inspired — about the question of different standards surrounding Black voices on cable news — continues to inspire anxiety in the many sources Variety spoke with. Last Friday, the Washington Post ran an op-ed calling the “cancellation” of Cross a “chilling signal” to the wider industry.

“We feel the chill,” said one network anchor of color who, of course, spoke to Variety on the condition of anonymity.