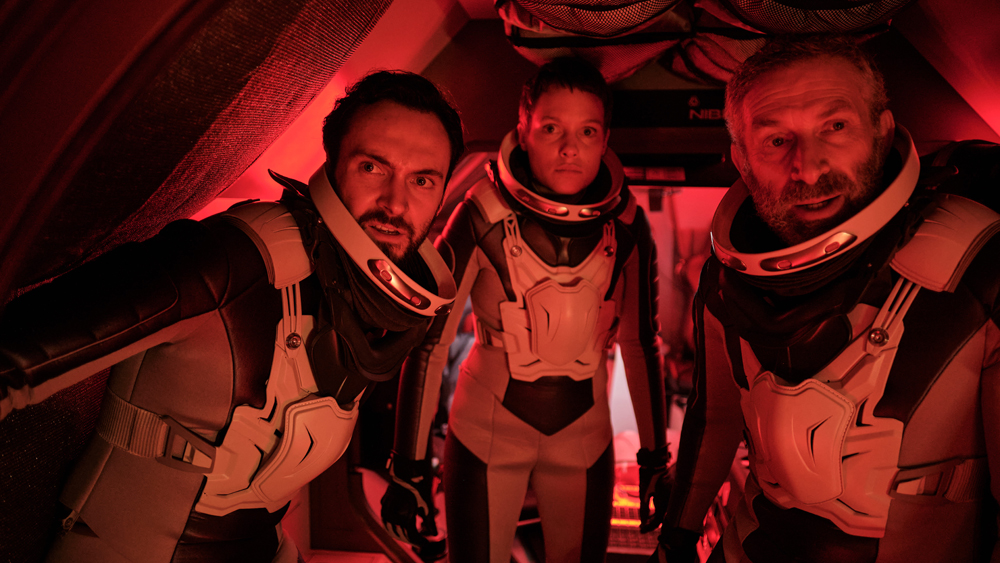 Set in a dark future in which a polluted and barely sustainable Earth is plagued by corporate armies battling for depleting resources as the wealthy live in air domes that protect them from the contaminated atmosphere, the story centers on three astronauts aboard the space station Rubikon, where scientists have developed a possible means of survival, a sustainable algae project to provide oxygen and food.

When a mysterious and highly toxic fog begins to envelop the planet, the crew has to decide whether to risk their lives and return to Earth in an effort to rescue survivors or remain safe aboard the self-sufficient station.

Inspired in part by “Star Trek” (particularly “The Next Generation,” “Deep Space Nine,” “Voyager” and “Enterprese” era), the psychological thriller deals not only with spaceflight and environmental catastrophe, but also with philosophical questions of morality, pragmatism, survival and sacrifice.

“‘Star Trek’ was something I grew up with,” says Lauritsch. In her film, the Austrian director sought to explore similar philosophical themes and struggles that often made for riveting television aboard the U.S.S. Enterprise. And like classic ‘Trek,’ the action would be limited to the ship, in part for budgetary reasons, and focus on a story that had “to be carried by plot points, by character work.”

“I wanted it to be like a psychological play situation that happens to take part among a crew on a space ship. You cannot really do it differently in Austria because we don’t really have the money for films like that. I think this is the maximum you could do with the money you can get – also as a first-time filmmaker. So it was clear to us all that it had to be something like a chamber play.”

“We have this genre, and we have all these rules and expectations that viewers will have, and we wanted to break them all. That’s the concept of the thing, to do something that you wouldn’t expect. I really love when people see the film and they’re like, ‘Ah, I thought it’s going that way but then it’s going in a completely different way.’”

Lauritsch’s love of ‘Star Trek’ also ultimately benefited the production. Attending a ‘Star Trek’ convention in England, she met a European Space Agency (ESA) astronaut. “Everybody just wants to talk to the actors but nobody wants to talk to the actual astronauts that are there. I told him I had this project and I really needed some research advice.”

The astronaut introduced her to an ESA ground controller, who was also at the convention. “She’s the ground controller of the actual missions. So they invited me to come to ESA in Cologne.” There, Lauritsch also examined the space station model used to train astronauts.

“We really got this great connection and this all just because of my love for sci-fi and ‘Star Trek.’”

Lauritsch worked with production designer Johannes Muecke (whose credits include a number of Roland Emmerich films in various capacities, among them “Moonfall,” “Midway” and “Independence Day: Resurgence”) on the design of the “Rubikon” space station, which camera and imaging giant ARRI helped bring to life as a 3D model. It was then used by the Austrian compositors for the final shots.

“We built a thing that we love and ARRI really made it completely hyper-realistic, and it really worked.” The film, she adds, has “the coolest space station I have seen so far. It’s even cooler than Deep Space Nine in my opinion.”

Despite a €3 million budget, Lauritsch and her team managed an impressive achievement. In terms of the work and hours the dedicated crew devoted to the production, the film could easily have cost twice its budget, she stresses. Lauritsch praises Muecke in particular, for inspiring her and the rest of the crew. “He put in so much positive energy.”

The cast was equally dedicated. “They were all so easy to work with. Actually it was such a gift for me as a filmmaker because they all came from different acting schools. Mark is more from the American industry and George from the British one and Julia from Austria, and especially this Austrian style is very different I think. But it kept everything fresh. We didn’t talk too much in advance and none of them knew the backstory of the others. I wanted it to be as if three strangers from different cultures are meeting for the first time, which they actually did.”

The environmental catastrophe and economic disparity portrayed in the film are also themes close to Lauritsch’s heart. “As an artist, there are some subjects that were very important to me: what we’re doing to our world.” The destruction of Earth’s coral reefs has been particularly painful and infuriating for her and likewise inspired the apocalyptic scenario of the film. “I realize I could at least use this negative energy to form something. I said, okay, this is what I want to do with my script.

The growing gap between the very wealthy and the poor has likewise left its mark. It’s a subject that remains important to her and will likely feature “in the next 10 films that I’m doing. This will probably be the main thing.”

While she is already developing another project, Lauritsch is considering a follow-up to “Rubikon.”

“If anything, I would love to do the prequel, especially because the characters have such vivid backstories, but we had to edit them out.” A prequel would follow those backstories and how the main characters eventually meet before the events that take place in “Rubikon.” It could also be ideal material for a series, she adds.

Lauritsch is also developing a script for her next project, an episodic film set in a near future in which scientists determine beyond a doubt that there is no God and the impact that has on the world.

It follows four different characters from different cultures that are loosely connected with each other, and how they deal with that. It would deal in a metaphorical way with recent questions surrounding the COVID-19 crisis and science versus faith.

“It’s something that is going on in our society. I found it very interesting how people are dealing with unpleasant truths that are there … and what people do to escape these fears, this escapism, and this craziness that is going on.”

“Rubikon” is produced by Loredana Rehekampff and Andreas Schmied of Vienna-based Samsara Filmproduktion and Klaus Graf of Graf Filmproduktion in Klagenfurt. The Playmaker Munich is handling world sales.