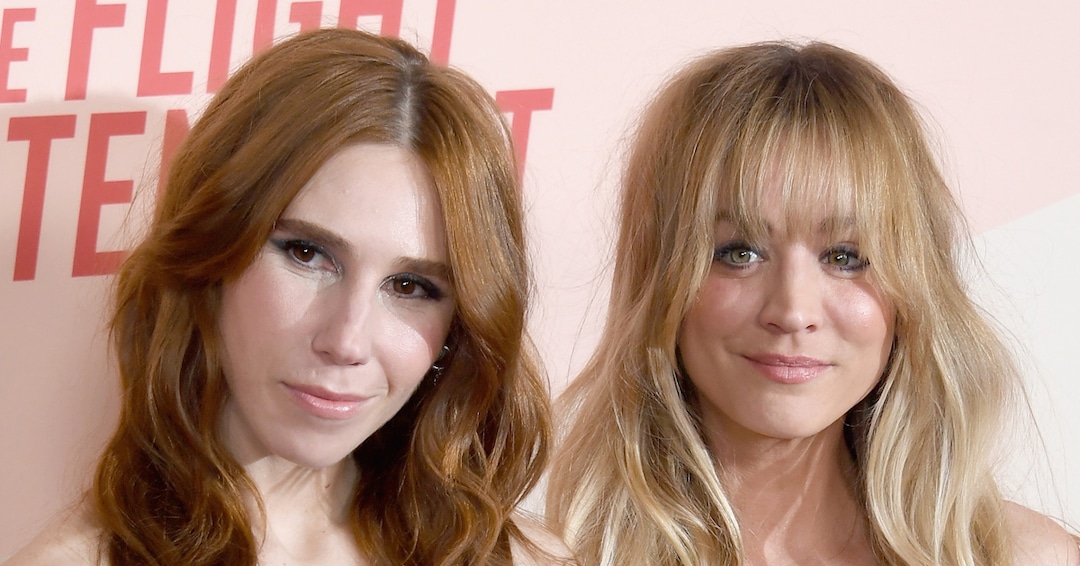 Kaley Cuoco and Zosia Mamet are best friends onscreen, offscreen, and on their arms.

The stars of HBO Max’s The Flight Attendant shared the sweet story of how their first meeting inspired their new matching friendship tattoos with E! News’ Daily Pop.

The besties connected immediately upon meeting at a chemistry read for The Flight Attendant. Kaley felt so comfortable around her potential new co-star that she gave Zosia a little “boop” tap on the nose.

“It became a thing, and then we did it all the time,” Kaley told Daily Pop‘s Francesca Amiker. The two got the word “boop” tattooed on their arms in April 2022.

Their little act of endearment seems to be catching on with others, as Kaley joked, “Now people are booping each other. I think we’re causing a major stir.”

“You know how ‘Fetch’ didn’t happen?” Zosia added, referencing the hilarious quote from the movie Mean Girls, “‘Boop’ is happening.”

The BFFs always know how to have a good laugh, but they also know how to comfort each other. Having filed for divorce from her husband of three years, Karl Cook, in September 2021, Kaley told Daily Pop how Zosia helped her through tough times on set.

“We lived together towards the end of season two, and there were days when I didn’t think I could even go to work,” said Kaley. “On [Zosia’s] days off, she would come to work and have lunch with me in my trailer. And I was like, ‘It’s your day off.’ She’s like, ‘No, no, I’m coming.’ Those little things are a big deal.”

Season two of The Flight Attendant picks up with Kaley’s character, Cassie Bowden, working as an asset for the CIA. When asked what spy skills they’d like to have in real life, the two initially responded with stealth and invisibility. But soon, Kaley and Zosia’s answers turned into a hilarious conversation about superpowers.

After Zosia stated she would like the ability to intercept people’s minds, Kaley said, “I wanna be able to move things with my eyeballs.”

“Well, I’d like to be able to breathe underwater,” Kaley said. Her answer piqued her co-star’s interest, as Zosia responded, “Okay, me too.”

Check out the full interview above.

Season two of The Flight Attendant is now streaming on HBO Max.