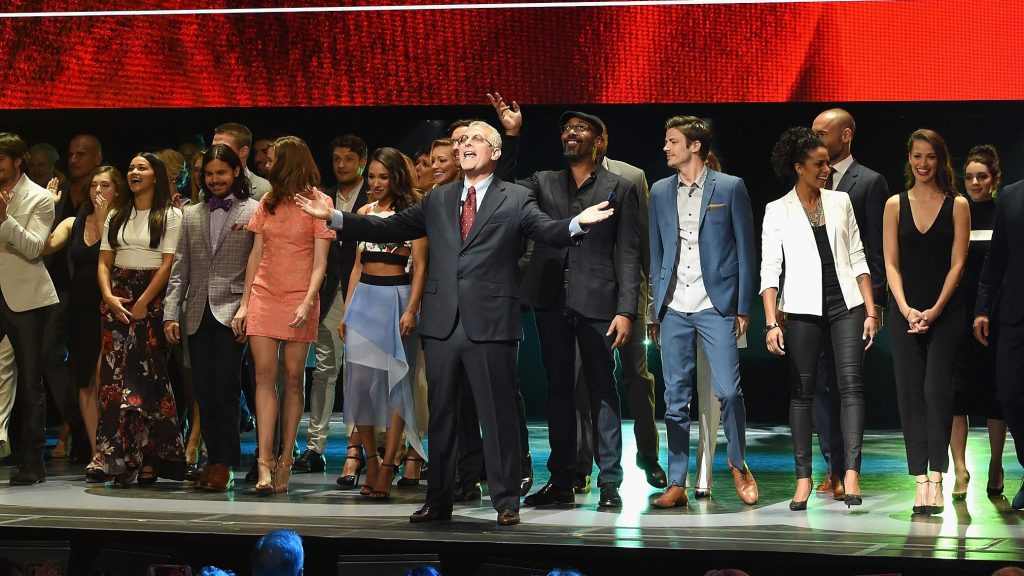 [Above: The CW CEO Mark Pedowitz, with his network’s stars, at the 2015 upfronts.]

When Mark Pedowitz first joined The CW as head of the network in 2011, he told “Supernatural” star Jared Padalecki that he was a fan of the series (which was then in its sixth season) and had seen every episode. At first, Padalecki assumed that Pedowitz’s comments were the kind of niceties that an incoming network president is supposed to say to their series stars.

“I didn’t think he was lying,” Padalecki said. “But I thought he was at least being kind. Maybe he hadn’t caught up yet or had seen two episodes. He was certainly supportive and friendly. But I came to find out, as the months and years progressed, that he actually was a big fan of Supernatural and had seen every single episode… When we talked this weekend, he said that he has seen every single episode of every show that he was president of, and will continue to watch every episode of every show.  And I believe him. He hasn’t lied to me ever.”

As Pedowitz prepares to depart The CW after more than a decade at the helm (and following Nexstar’s acquisition of the network from longtime joint partners CBS and Warner Bros.), producers, stars and execs are all repeating the same four words: “End of an era.”

“He is a fan of great television and stories,” said megaproducer Greg Berlanti, whose tremendous CW output has included “The Flash,” “All-American” and “Riverdale.” “He’ll watch every episode, he’ll give you know every kind of note, and he wants to argue and debate things. He represents to me that legacy of network heads that love TV. He was always having to do more with less and navigate two different boards. And he still figured out a way to connect with the audience. A whole generation have now grown up watching all of these CW shows.”

Pedowitz wasn’t there at the birth of the CW, but he kept the network alive and thriving over the past 11 years thanks to the kind of crafty dealmaking that has been a hallmark of his career — including during his lengthy tenure at Disney/ABC.

At ABC, he was created business templates that helped evolve the way deals were made between networks and studios. He did the same at the CW, starting with the network’s landmark digital streaming deal in 2011 — in which the network, in concert with parents CBS and Warner Bros., struck a pact with Netflix for post-season access to The CW shows. That helped give The CW a new lease on life, by making it even more worthwhile for CBS’ and Warner Bros.’ studios to produce series for the network.

But it was also a tremendous factor in the growth and success of Netflix. When that deal came up for renewal in 2016, Netflix was willing to pay even more to maintain domestic SVOD rights to the CW’s output, which at that time had become even more successful under Pedowitz, growing to include a lineup of DC Comics-branded superhero shows, notably “The Flash” and “Arrow,” and buzzy critical darlings “Jane the Virgin” and “Crazy Ex-Girlfriend.”

The deal was ultimately valued at more than $1 billion, and that digital strategy helped turn series like “All American” and “Riverdale” into hits, thanks to their exposure on Netflix. The CW’s then-parents ended the deal in 2019 as they launched their own streaming services.

With the end of the Netflix arrangement (and a previous pact with Hulu), Pedowitz also eventually secured full in-season digital rights to all new CW scripted series for its The CW app and CWTV.com website.

In growing the CW, Pedowitz increased the network’s programming output, including more original scripted series, international acquisitions and unscripted series and specials. That led to finally programming a full seven nights a week, restoring Sunday in 2018 and adding Saturday for the first time in 2021. And although Pedowitz remained frustrated at the Television Academy’s lack of Emmy attention for the CW, the network was honored elsewhere, including an AFI Award, Peabody and Golden Globe (via star Gina Rodriguez) for “Jane the Virgin,” and Golden Globe and Critics Choice wins for “Crazy Ex-Girlfriend” star Rachel Bloom.

The CW under Pedowitz also earned high marks for its embrace of inclusive fare that represented people of color, the LGBTQ community and more. According to the network, last season around two-thirds of showrunners, writers and directors on The CW’s original scripted series were women and/or people of color, while nearly 50% of the series regulars were women and 57% were people of color. And according to GLAAD, The CW held the highest percentage of LGBTQ series regular characters among broadcasters for the fifth year in a row.

“If it was about a storyline or person’s life experience, or someone’s point of view, [Pedowitz] would say, ‘this is all I can bring to the table, please bring what you bring to the table,’” Berlanti said. “And he was encouraging that people be themselves, as long as they were hardworking and passionate. That was his goal to tell different kinds of stories. It was a great part of this character and a great part of the success.”

Pedowitz elicits fierce loyalty from his producers and stars, most of whom have a story similar to Padalecki’s of being wowed by how well exec kept close tabs of their shows and their lives. That’s a task for his underlings, they’d think — but Pedowitz not only watched every episode of every series on his network, but he’d spend several weeks every year visiting the shows’ sets (mostly in Vancouver).

“It goes a long way,” Berlanti said. “I can’t make a lot of sports analogies, because I don’t know a lot about sports. But I think of ‘Moneyball,’ and doing more with less, and figuring out ways to be just as successful with less. Great stories first, believing in younger showrunners or less experienced showrunners, diverse voices. He did that and built a real library of hits.”

Berlanti credited Pedowitz with saving “Supergirl,” which had originally premiered on CBS but couldn’t find an audience there, as well as “Black Lightning,” which had first been developed at Fox. And Berlanti said it was Pedowitz who inspired the creation of “DC’s Legends of Tomorrow” by pointing out how that some of the other DC series’ ancillary characters deserved more time in the spotlight.

“The whole DC world that we had to build, really took a lot of trust and faith,” Berlanti said. “In a landscape where it was pretty much all about movies. I think the audience really could tell they treated them with the kind of support and sensibility of as important as any feature film stories are getting told in the same kind of universe.”

Padalecki said he knows, without a doubt, that “Supernatural” wouldn’t have lasted as long as it did — 15 seasons and 327 episodes — if it wasn’t for Pedowitz. “If we didn’t know that we had Mark, driving the winds that blew the sails on our little boat called ‘Supernatural,’ we would have been canceled [long before then],” he said. “But we knew that [Pedowitz] really believed in us and because he believed in us, it was the rocket fuel to whatever spark we had.

“We knew that one way or the other, he cared about us as human beings,” he added. “That was even more important. I’ve been public about my relationship with depression and anxiety. And whenever I talked to Mark, he was always more concerned about that than he was about the show. He was always more eager to hear if I was willing to talk about, was I ok?”

Ironically, The CW’s success in building hits that succeeded in streaming helped lay the foundation for CBS and Warner Bros. to fully embrace their own full-fledged streaming services — which, in turn, eventually led to their decision  to pull their majority stakes in the network and sell it to Nexstar (which owns most of The CW’s key affiliates, including WPIX New York and KTLA Los Angeles). Nexstar, which has a very different business model than CBS and Warner Bros., seeks to evolve the CW to make it a better fit for its station group, which will make it a different kind of network than it was under Pedowitz.

Padalecki now stars in and executive produces “Walker” (now entering its third season on the CW) and is also an EP on the new prequel series “Walker: Independence.” Despite the ownership change and Pedowitz’s departure, he remains optimistic: “I am aware that the only constant in this life is change,” he said. “My only job is to do the best damn job I can do. And so let the chips fall where they may. If I do the best work I can do, and it doesn’t work out, then I can sleep soundly at night going, ‘well, I gave it my all.’”

Berlanti said he believed The CW remains “oceanfront property” because of the unique status of being a broadcast network. “It takes people longer times to find shows now, no matter where you are. It’s a valuable place to be one of those pit stops along the way,” he said.

Meanwhile, as Pedowitz dusts off his Pine Street Entertainment production shingle, Berlanti said that it was “my sincere hope is that I can keep working with him, wherever he goes and whatever he does next. Because he’s such an important part of my life. He’s been such a mentor to me.”