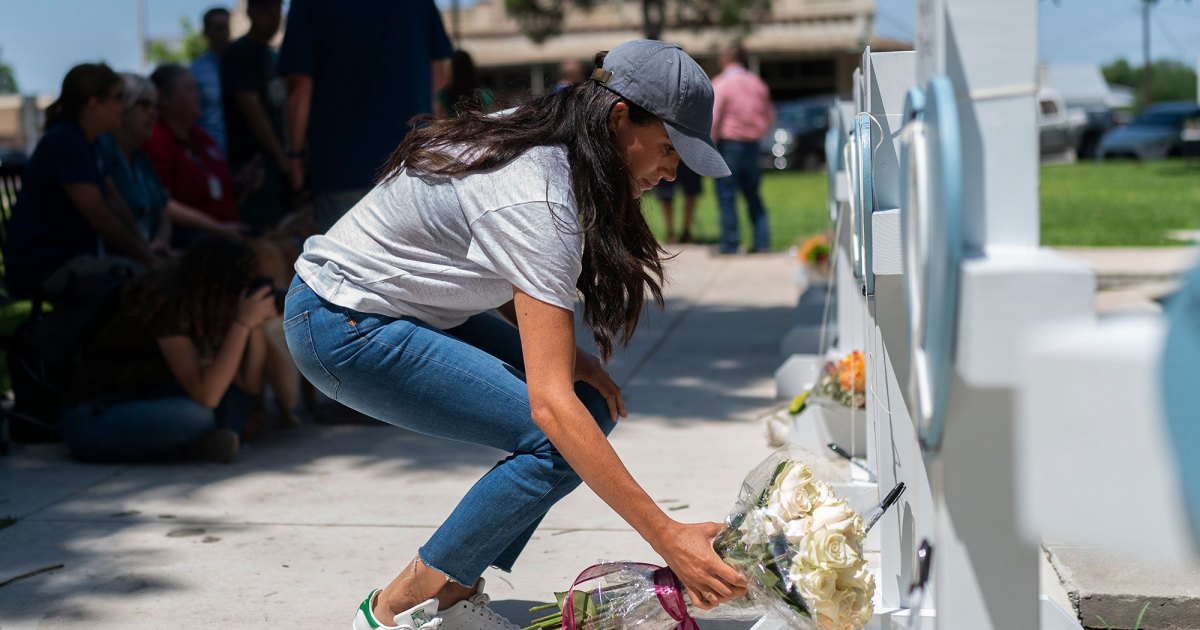 Paying her respects. Meghan Markle visited a memorial for those who died in the Ulvade, Texas, elementary school shooting.

The 40-year-old duchess was spotted in southern Texas on Thursday, May 26, two days after 19 children and two teachers were killed at Robb Elementary School. Meghan brought flowers to a display outside of the Uvalde County Courthouse, which featured the names of the shooting’s victims on white crosses adorned with blue hearts.

The Suits alum wore jeans and a T-shirt paired with white sneakers and a baseball cap. She knelt down to lay a bouquet of white roses at the base of one of the crosses.

Meghan is one of many celebrities who have expressed their grief over the tragedy since it made headlines on Tuesday, May 24, with several A-listers and reality stars using their platforms on social media to urge political leaders to take action.

The California native and her husband, Prince Harry, are no strangers to lending a hand to those in need. Harry, 37, and Meghan launched the Archewell foundation after previously stepping away from The Royal Foundation, their shared charitable organization with Prince William and Duchess Kate.

“We connected to this concept for the charitable organization we hoped to build one day, and it became the inspiration for our son’s name. To do something of meaning, to do something that matters,” the Sussexes told The Telegraph in April 2020, referring to their now-3-year-old son, Archie. “Archewell is a name that combines an ancient word for strength and action, and another that evokes the deep resources we each must draw upon. We look forward to launching Archewell when the time is right.”

The pair’s new venture followed their departure from their senior royal duties, which they announced in January 2020. One year later, Buckingham Palace confirmed that Harry and Meghan, who also share 11-month-old daughter Lili, would not return as working senior royals.

“Following conversations with The Duke, The Queen has written confirming that in stepping away from the work of The Royal Family it is not possible to continue with the responsibilities and duties that come with a life of public service,” an official palace statement read in February 2021.

In response, the duke and duchess asserted in a statement of their own that they will “remain committed to their duty and service to the U.K. and around the world, and have offered their continued support to the organizations they have represented regardless of official role,” concluding, “We can all live a life of service. Service is universal.”

After making their royal exit permanent, a source exclusively told Us Weekly that Harry “[did] not have any regrets,” adding that the former military pilot felt “liberated and excited about starting this new chapter” with his wife.

Scroll down to see more from Meghan’s visit to the Texas memorial: