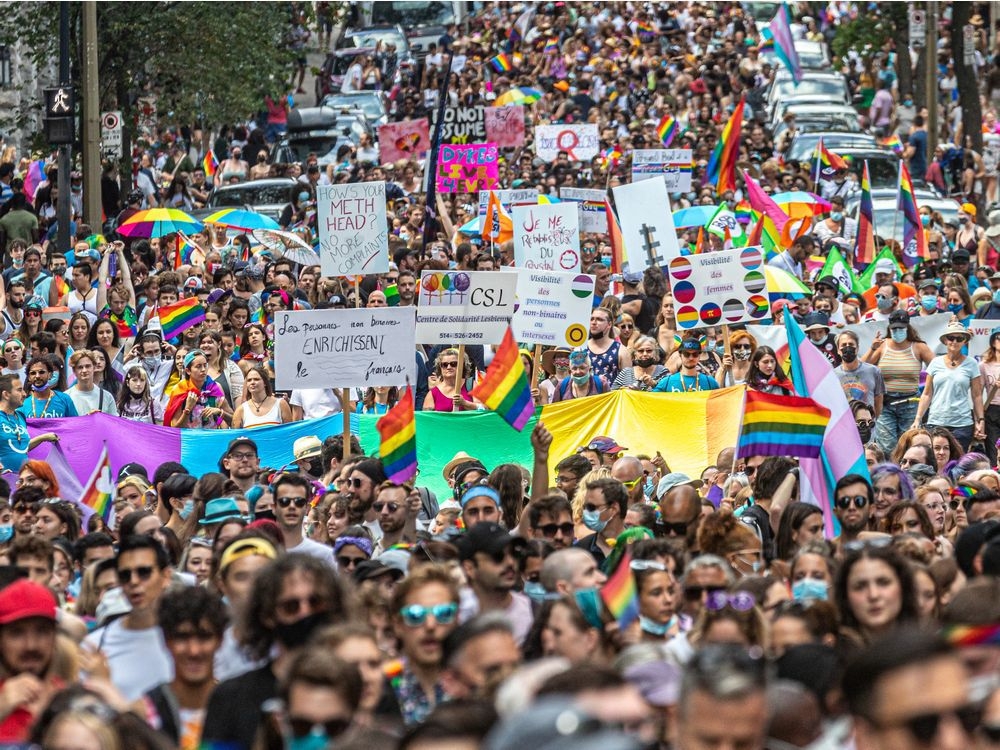 Despite the cancellation of the Montreal Pride parade, hundreds of people marched Sunday in the downtown streets to celebrate diversity of sexuality and gender.

The participants, carrying multicoloured flags, gathered at Dorchester Square in the early afternoon, at the same meeting point originally planned for the parade. Music was playing on site. They then headed toward Place Émilie-Gamelin, amid a festive atmosphere.

Montreal police escorted marchers and kept the streets clear on their path.

Montreal Pride executive director Simon Gamache confirmed the cancellation of the parade for security reasons Sunday morning, saying the organization was short 80 people, most of whom had been assigned to close streets alongside police.

“That’s enormous,” he said, adding that it amounted to more than one-third of the necessary staff, as around 200 volunteers were expected.

He said the cancellation was the result of multiple factors, including COVID-19 cases during the week, multiple possible cases of heatstroke and fatigue among volunteers who had contributed in previous days.

Other people who said they would help hadn’t shown up for previous events, Gamache said, leading organizers to conclude they wouldn’t be present for the parade.

“Montreal Pride isn’t immune from human resources issues,” Gamache added. He said another event might be organized to replace the parade.

All 11 Photos for Gallery

Full Screen is not supported on this browser version.

You may use a different browser or device to view this in full screen.

At a news conference on Sunday, Mayor Valérie Plante said she was taken aback by the parade’s abrupt cancellation.

“I had on my pink suit. I was looking forward to walking with Montrealers in the most important LGBTQAI2+ parade in North America,” she said. “I can’t hide my surprise. I was disappointed to learn in the newspaper this morning that it wouldn’t happen, within a few hours of the start.

“We called the SPVM and the organizers and asked, ‘What’s happening? How come it’s being cancelled a few hours before the event?’

“Let’s let the Pride (parade) organizers give their version, but I can assure you, from the city, if we had been made aware earlier, if we had known they were lacking the means, we would have put our energy into (making it happen).

“I feel frustration and disappointment. I love Pride. I’m proud Montreal is a city that is friends with the LGBTQAI2+ community. It’s sad not to celebrate, together, Montreal’s place as a city of inclusion and diversity.”

The Montreal police force tweeted Sunday afternoon that it learned of the parade’s cancellation that morning and had not taken part in the decision.

“Like every year, we were ready to oversee the event and we will be there for every edition,” the SPVM tweeted.

People who had planned to take part decried the cancellation of the parade, which was meant to be the culmination of a week of festivities, but were heartened to see a group marching anyway.

“It really sucks,” said Oscar Hogan-Paul. “I’m just glad that everybody’s out here having fun, celebrating themselves and each other.”

Kleo Hellman said the cancellation prompted a reminder of what Pride is really about.

“It’s not about festivities organized by the municipality,” Hellman said. “It’s about us. It’s about queer people, and gender-queer people. We’re the ones that make Pride a thing. Without us, there wouldn’t be any Pride.”

Béatrice Piché referred to the impromptu makeup event as a protest, not a parade.

“I think that captures a bit of the sentiment here right now,” Piché said. “Pride originally was a protest, and there’s a feeling of that still here today. People want to be proud. People are a bit frustrated about corporate Pride and what that means in the queer community. So for people to be out here marching today, despite (the parade) officially being cancelled, it means a lot.”

“The morning of the day of Pride, you can’t cancel,” Burlesque said. “It’s not a party. We need this. We waited for this day all year. So you can’t cancel it. That’s why we’re here. I think it’s bulls—, you don’t have enough volunteers.”

“I feel like they should have known before the day of, what the volunteer situation, the police situation and security situation was supposed to be,” said Julia, who preferred not to give a last name.

“The fact that it’s cancelled last-minute due to a lack of security? It’s a celebration, and a lot of gay, trans and queer people have never really felt security in our daily lives. It’s the one day a year we get to have a big party and celebrate with everybody and feel safe. I haven’t found anybody who truly understands why it was cancelled. … So yeah, pretty wack.”

“Everyone has been in that boat,” said director Christian Tanguay. “It was hard for everyone, but it takes volunteers to organize all these events.”

The late announcement of the parade’s cancellation also drew criticism on social media.

“Lack of personnel? TODAY the organization realized?” one Twitter commenter asked, noting that organizers had never posted about more volunteers being needed in the months leading up to Pride.

“A lack of organization and mismanagement that boggles the mind,” another Twitter user wrote.

Montreal’s Pride parade was cancelled due to the pandemic in 2020. A scaled-back Pride march, without floats or vehicles, was held in 2021.

The 2.9 km parade was supposed to run along René-Lévesque Blvd., between Metcalfe and Alexandre DeSève Sts., beginning at 1 p.m. Thousands of people take part each year to celebrate progress in advancing the rights of the LGBTQ2+ communities and highlight their demands.

Other Pride festivities went ahead as planned Sunday.

Presse Canadienne contributed to this report.