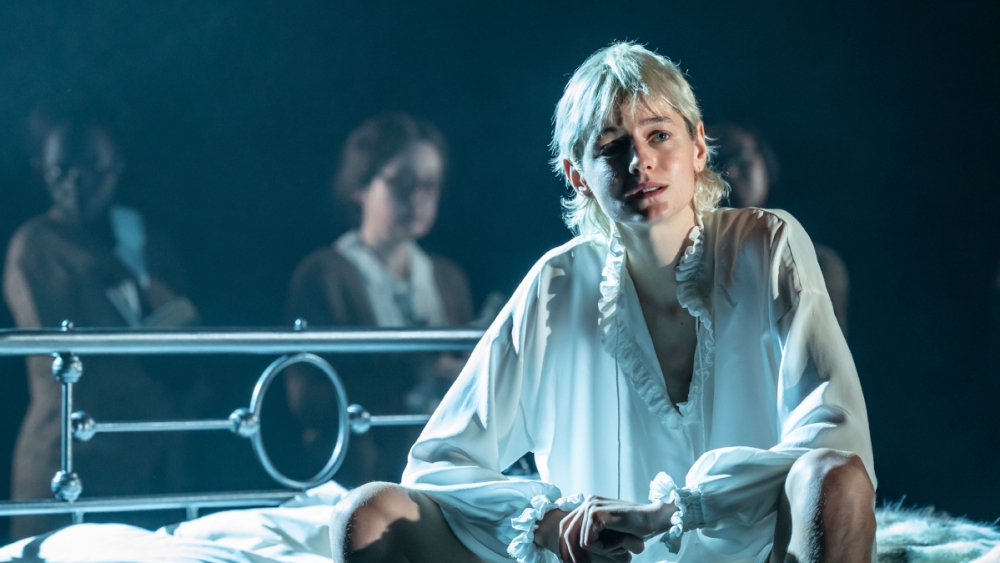 The entirely beguiling lightness of touch is remarkable. Staging the startlingly prescient, gender-swapping, time-traveling 1928 novel “Orlando,” a lesser creative team would have gone to town on The Lessons That Virginia Woolf Has Taught Us. But while director Michael Grandage’s vividly theatrical production of Neil Bartlett’s fleet-footed, wildly imaginative but wonderfully disciplined adaption shines literal and metaphorical light on contemporary ideas of identity, no fingers are ever wagged. Didacticism is banished. Performances and design of unique warmth and wit create an outstandingly original theatrical pleasure.

Bathed in Howard Hudson’s subtle lighting that emphasizes their unmistakable inner glow, Emma Corrin’s Orlando asks “Who am I?” Good question. In Woolf’s novel (subtitled “a biography”), they are someone who starts out as a young Elizabethan nobleman but who then travels not only from place to place but century to century… and then gender to gender (after surprisingly waking up to find herself an 18th century woman) and beyond. Bewitched by their desires, they repeatedly find themself bothered and bewildered by the demands of the changing societies in which, forever attractive and barely aging, they find themself.

Bartlett takes all this several stages further, not only in terms of time by bringing it right up to the present, but also in the matter of tone. His script, cunningly littered with allusions and quotes, runs from drolly cod-Elizabethan to Fred Ebb’s “Maybe This Time” to “Some Like It Hot.”

That this is no pale copy of a classic is immediately evidenced by the arrival of not one but nine identically dressed actors of every gender all of whom play Virginia Woolf, by turn patient and urging, each a seeming bluestocking in autumnal browns, but brimming with questions. It’s audacious, nothing less than theatrical cubism. But instead of being arch and forbiddingly intellectual, the effect is immediately legible and engaging. Watching them all increasingly in thrall to their creation builds a thrill into the evening.

But then Bartlett is not only a highly experienced dramatist and novelist with credits at both the National and the RSC, he is a longstanding queer performer and has ensured that performance, in every sense, is at the absolute heart of the piece. That heart is most definitely embodied by slender, tender Corrin. Shedding the pale seriousness they hallmarked as Diana in “The Crown” and as the equally hopeful but troubled wife in Grandage’s film “My Policeman,” they effortlessly hold the audience. Going from devil-may-care to increasing determination, they blur gender boundaries with compelling ease, gracing everything with distilled, increasingly emotional focus.

Joining them in completely disregarding the fourth wall is a marvelously tart, very funny Deborah Findlay (“Escaped Alone”) as Mrs. Grimsditch, Orlando’s long-suffering, no-nonsense housekeeper cum wardrobe mistress — and thanks to the invention of designer Peter McKintosh, there are a hell of a lot of lavish, instant period costume changes, the open mechanics of which clearly underline the intellectual intent beneath them. Indeed, McKintosh’s elegantly controlled visuals (he also designed the sophisticated yet simple set with delightful historical backdrops) ensure that Orlando becomes a prism through which we see not just men and women’s contested places throughout history, but the ever-changing business of identity.

Mrs. Grimsditch spends the evening amusing the audience as much she does Orlando as she narrates the who, what and where — and, crucially, the why. Heralding the arrival of Lucy Briers’ fearsomely formal Elizabeth I, she gives us a baleful look: “I tell you, if that woman’s changed her linen since the Armada, my name’s Sir Walter Raleigh.”

The risk of this 85-minute romp across the centuries is that it could have ended up like “Candide,” in which multiple scenes in random locations lack cumulative weight because the actions visited on the central character have little or no consequence. When they put that on stage, Lillian Hellman and Leonard Bernstein famously failed to solve the problem of how to give their adaptation dramatic heft.

Grandage and company solve the problem via an increasing sense of understanding, taking us beyond the incidents to go inside the minds of the characters and into Woolf’s hopes and imaginings. What starts out as deliciously self-aware fun — there are knowing gags aplenty — grows unexpectedly emotional. At the expertly staged climax, here brought beyond Woolf’s death in 1941 up to the immediate present, we witness Corrin’s Orlando growing in stature and understanding. Answering their initial question with galvanizing authority, they stride into the light as they realize their essence in both words and love. Like the show, it’s as uplifting as it is unexpected.