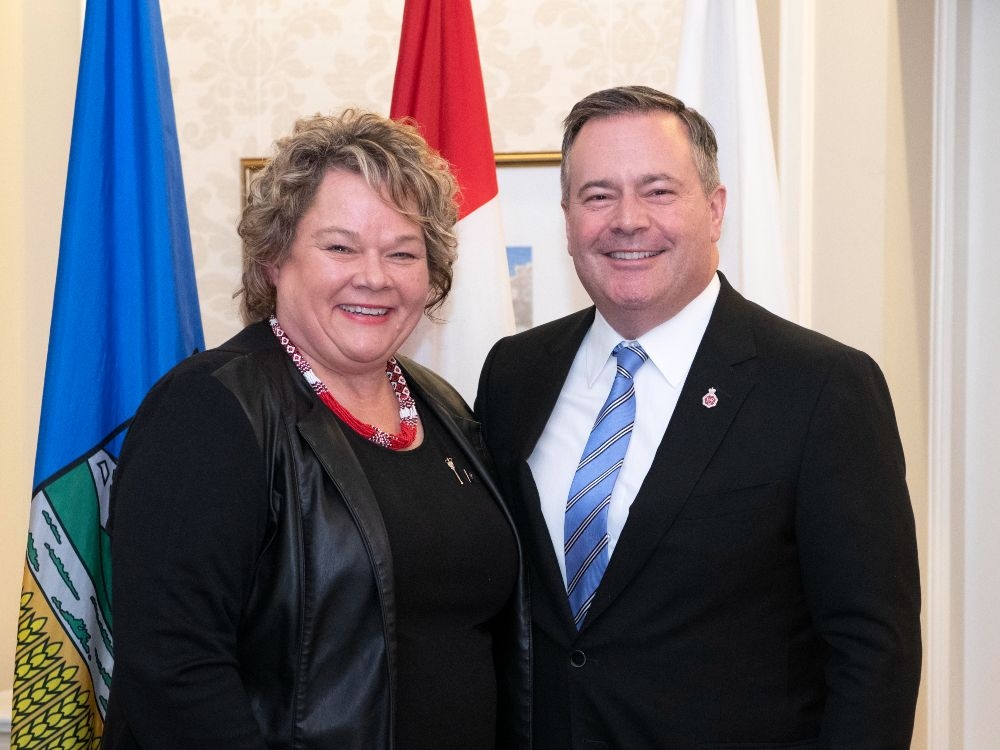 Alberta’s UCP government has given a $200 prize to the author of an essay that argues more Albertan women should be encouraged to give birth in order to stave off “cultural suicide.”

The Her Vision Inspires contest invited women aged 17 to 25 to submit essays in February describing their ideas for the province and what they would do if they were a member of the legislative assembly.

It awarded third prize to an essay that references a far-right white-nationalist theory that white populations with low birth rates are being replaced by non-white immigrants through mass migration.

“While it is sadly popular nowadays to think that the world would be better off without humans, or that Albertan children are unnecessary as we can import foreigners to replace ourselves, this is a sickly mentality that amounts to a drive for cultural suicide,” reads the essay, attributed only to S. Silver.

Since it was first flagged online by Edmonton-Highlands-Norwood NDP MLA Janis Irwin, the website featuring all three prize-winning essays attracted a torrent of condemnation on social media, and was removed Monday evening.

Silver’s entry argued women are “not exactly” equal to men, and the idea that they should try to break into careers traditionally dominated by men is “misguided” and “harmful.”

“I believe that the best approach would be to reward families for their reproductive service both with financial rewards to offset the financial burden they are taking on and with medals to symbolize their valuable achievement of having 2+ children,” it states.

The judging panel of unnamed UCP MLAs was set to be led by Fort Saskatchewan-Vegreville UCP MLA  Jackie Armstrong-Homeniuk, later appointed associate minister of status of women in June.

Armstrong-Homeniuk’s office declined a request for an interview from Postmedia, and refused multiple requests to provide details of who else was involved in judging the contest.

In a statement, Armstrong-Homeniuk said it was intended to reflect a “broad range of opinions” from young Alberta women.

In a follow-up statement later Tuesday, Armstrong-Homeniuk apologized after she said she heard concerns from her caucus and cabinet colleagues.

“It’s clear that the process failed, and I apologize for my role in that. The selection of this particular essay and awarding it with third prize was a failure on my part as the head of the judging panel,” she stated.

Edmonton-Whitemud NDP Opposition MLA Rakhi Pancholi said at a Tuesday news conference the government, and the UCP MLAs involved, owe a proper explanation for what she called the misogynistic, sexist, racist, transphobic and fascist ideas in the essay.

“Why is the judge who chose it now saying they shouldn’t have chosen it?” she asked.

Pancholi compared the language in the essay to the ideologies of fascist governments, including Nazi Germany, which introduced a medal in 1938 for mothers of four or more children in an effort to encourage “racial purity” and increase the population of the Third Reich.

“This is an absolutely reprehensible claim. It is a nod to the racist replacement theory that drives white nationalist hate,” she said.

The contest was originally touted as a partnership between the Legislative Assembly of Alberta and the Commonwealth Women Parliamentarians Canadian Region, for which Armstrong-Homeniuk is the local chair.

Alberta legislature Speaker Nathan Cooper’s office said in a statement to Postmedia that neither it nor the legislative assembly office were involved with the selection of winners, and as soon as Cooper learned of the essay he had the website taken down.

“The content is abhorrent and does not reflect the views of the Speaker or the legislative assembly office,” it said, adding the contest was “conceived and administered” by Armstrong-Homeniuk.

Lise Gotell, a women’s and gender studies professor at the University of Alberta, said the essay perpetuates an essentialist, sexist and racist point of view stemming from the long-discredited and outdated concept that a women’s role is to reproduce as a bulwark against immigration.

“The fact that it was chosen says a great deal about the views on appropriate gender roles being advanced by this government,” said Gotell in an interview.

“This essay reads like something that quite frankly could’ve been written in the 19th century.”

At least two UCP leadership candidates strongly condemned the essay Tuesday, with Rebecca Schulz saying in a tweet it was a “disgrace” that it won an award sponsored by the government — a sentiment quickly shared by fellow candidate Rajan Sawhney.

The first-prize winning submission, which received $500 in merchandise from the legislative assembly gift shop, focused on encouraging women to pursue careers in politics, and the second-place entry, which received a $300 voucher, pitched working to increase public engagement and voter turnout.

— With files from The Canadian Press