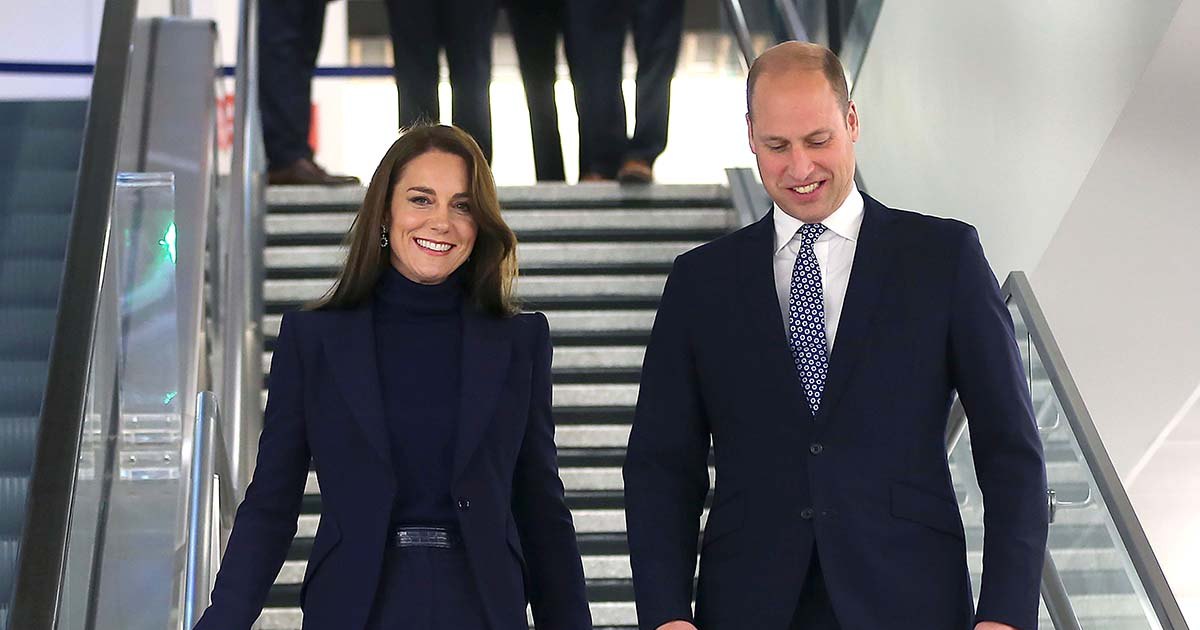 Welcome to Boston! Prince William and Princess Kate have touched down in the United States for the first time in nearly a decade.

“Catherine and I are delighted to be back in the United States and are extremely grateful to Governor [Charlie] Baker and The First Lady of Massachusetts for their warm welcome into Boston,” the Prince of Wales, 40, wrote via the couple’s official joint Twitter account on Wednesday, November 30.

The statement continued: “On this, our first overseas visit since the death of my grandmother, I would like to thank the people of Massachusetts and particularly of Boston for their many tributes paid to the late Queen. She remembered her 1976 bicentennial visit with great fondness.”

Kate, 40, and William’s trip, which coincides with the Earthshot Prize awards ceremony, was announced in July. “In 2022, we’re back and bringing Earthshot to the USA, where we’ll award the next five winners of the prize,” William said in a video shared via Twitter with Boston Red Sox player Xander Bogaerts, who added: “And we will be doing it right here in Boston.”

William launched Earthshot with David Attenborough in 2020 with the goal of inspiring practical and impactful solutions for problems caused by climate change. The organization’s name was inspired by President John F. Kennedy’s Moonshot, and the late politician’s John F. Kennedy Library Foundation is a host partner for the awards alongside Mayor Michelle Wu.

Ahead of their trip, a source exclusively told Us Weekly that the royal pair were “excited” to be stateside after “an emotional few months” following the death of Queen Elizabeth II in September.

“[They’re] hoping to boost their royal profile across the pond,” the insider added in October. “Kate and William are not taking this trip lightly and have been brainstorming with their team about the most effective ways to make a positive impact in the U.S. They’re taking a hands-on approach with speeches and engagements.”

The former military pilot and the duchess had an “absolute blast” when they visited America in 2014, per the source. William and Kate traveled to New York City for several diplomatic engagements — their last experience in the U.S. before touching down in Boston on Wednesday. At the time, the twosome met LeBron James when they watched the Cleveland Cavaliers play the Brooklyn Nets.

While their Boston visit will be brief ahead of the Earthshot event on Friday, December 2, Kate is hoping to “enjoy the festivities in the build-up to Christmas” with a quick stopover in NYC. “[She’s] dying to go ice-skating at the Rockefeller [Center] and shopping for fun souvenirs for George, Charlotte and Louis,” the source told Us last month, referring to the couple’s three children.

During their time in Massachusetts, William and Kate will tour Harvard University and have set up a meeting with Caroline Kennedy, the daughter of JFK. Not only is it their first trip to the U.S. in eight years, but the visit also marks the duo’s first overseas engagement since being named Prince and Princess of Wales. (The titles were previously held by King Charles III and the late Princess Diana.)

“TRHs are both excited for their first international trip since taking on their news roles as Prince and Princess of Wales,” a spokesperson for Kensington Palace told ABC News in November. “Both appreciate the history associated to the titles but understandably want to look to the future and pave their own paths.”

Scroll down for photos of William and Kate in Boston: