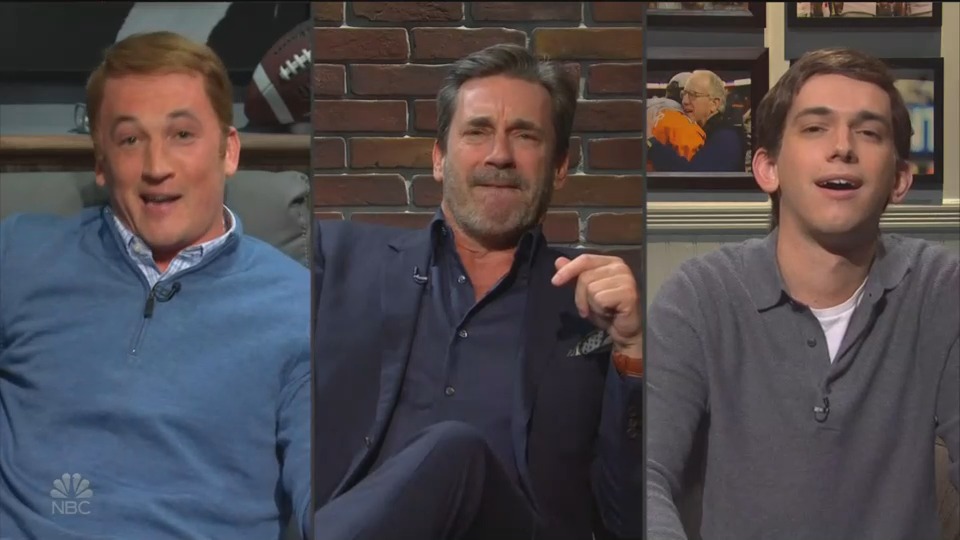 After a summer filled with cast exits and goodbyes, “Saturday Night Live” opened its 48th Season by poking fun at both frequent target President Trump and its own rebuilding period.

The sketch starred the premiere’s host Miles Teller and cast member Andrew Dismukes as sports stars and brother’s Peyton and Eli Manning, in a parody of their “Monday Night Football” commentary show “Manningcast.” However, instead of analyzing the plays of a football game, the two instead turned their insight into the opening sketch of “Saturday Night Live’s” new season.

At the top of the sketch, Teller as Peyton addressed the shakeups that the series has gone through other the summer, which saw eight cast members — Chris Redd, Alex Moffat, Aristotle Athari, Melissa Villasenor, Pete Davidson, Kate McKinnon, Aidy Bryant and Kyle Mooney — announce their departures from the long-running sketch comedy series. “There are a lot of changes at the show, which could be exciting,” Teller said. “Let’s see what they came up with.”

But the sketch-within-a-sketch proved to be a typical opening for the program, with James Austin Johnson reprising his role as Donald Trump in a sketch located at the Mar-a-Lago club during Hurricane Ian. Although Johnson was joined by Mikey Day, Chloe Fineman, Heidi Gardner and Bowen Yang, the focus was on the Mannings’ commentary, with Teller proclaiming that the sketch served “14 attempted jokes, one mild laugh and three chuckles.”

Certain jokes poked fun at the show’s tendency to give newer cast members bit parts, with new featured player Michael Longfellow playing a political aide with one line, only to fumble his blocking and fail to close a door behind him. “That might be the only time we see him tonight,” Dismukes said. Elsewhere, Devon Walker was consigned to parodying the viral Corn Kid from TikTok, the two other new featured players — Marcello Hernandez and Molly Kearney — did the griddy dance and Sarah Sherman got caught watching the sketch from behind the blinds.

The sketch also acknowledged the cast changes that mark the season by having Teller — following a purposefully weak impression from Heidi Gardner as South Dakota governor Kristi Noem — bemoan the lack of memorable political figures in the sketch: “What about a fun impression like Anthony Fauci or Lindsey Graham or Rudy Giuliani?”

Stopping by for surprise appearances were three-time “SNL” host — and Teller’s “Top Gun: Maverick” co-star — Jon Hamm as a guest commentator with the Mannings, and a somewhat inexplicable appearance from Shaun White in the sketch-within a sketch. When Teller questions White’s cameo, Hamm breaks down “SNL’s” logic for including other stars in the opening sketch.

“Sometimes they need to bring in a real celebrity when the host isn’t that famous,” Hamm said. “When they couldn’t get the star of the summer movie, you’re Tom Cruise or Jon Hamm, they had to get the co-star.”

“Well I heard they rarely put the host in the cold open, so when they do, it is special,” Teller replied.

The Oct. 1 premiere of “SNL” came less than a month after the live television institution won its sixth consecutive Emmy for best variety sketch series. In addition to Teller as the host, the episode featured musical guest Kendrick Lamar, performing songs from his recent “Mr. Morales and the Big Steppers”.

Prior to the departure of the eight cast members over the summer, the show’s cast had remained unusually stable for several seasons, with Season 47’s 21-person cast being the largest in the series’ history. The behind-the-scenes ranks of “SNL” also faced a significant loss after producer Lindsay Shookus left this August after 20 years with the program.

During the show, many fans additionally noticed the absence of Cecily Strong — currently the second longest tenured cast member after from Kenan Thompson — from both sketches and the opening credits, leading to some speculation that she left the show with no announcement. However, Variety‘s senior TV editor Brian Steinberg confirmed via an “SNL” spokesperson that the actor is still on the show, but is taking a hiatus while starring in the one-woman play “The Search for Signs of Intelligent Life in the Universe.” The Center Theatre Group production will have its final performance on Oct. 23.