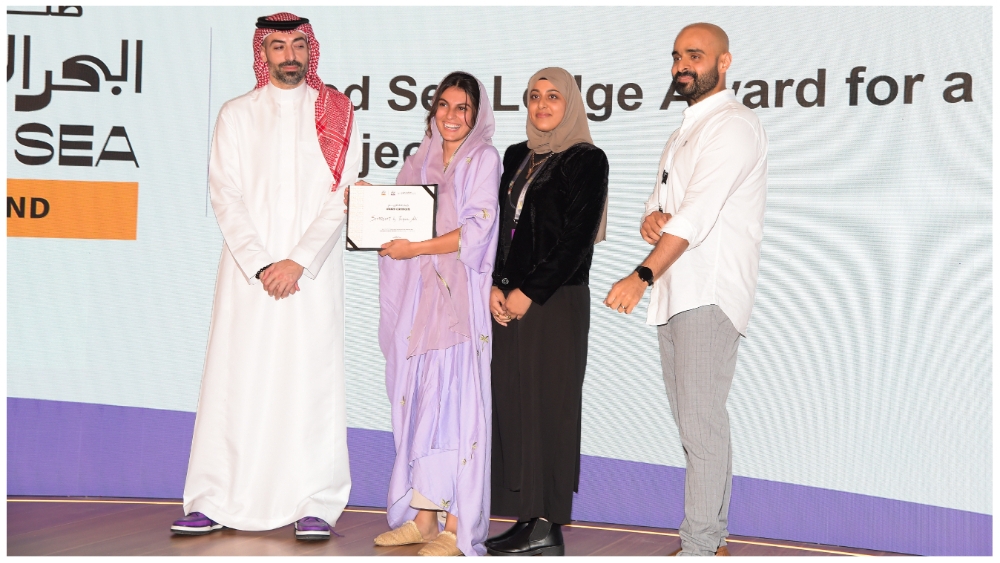 “Scapegoat,” a quirky comedy drama about a remote Saudi village, received the top $100,000 prize for a Saudi film in development in the Red Sea Souk awards, as well as a $50,000 minimum guarantee from Cinewaves Films, for acquisition of Arab world distribution rights.

Structured as a $1.5 million Saudi-Netherlands co-production, the project will be directed by Feras Almusharrie and produced by Razan Alsoghayer, both based in the eastern province of Saudi Arabia, and is written by Bahraini filmmaker Taqwa Ali. It participated in the 10-month Red Sea Lodge residency program.

The central character, Dunia, is taken by her uncle from her village as a child, because she is accused of being a witch, following the death of the community’s goats. She returns 15 years later to find the village divided into two zones, blue and white, where the locals hide from each other.

Driven by a rebellious spirit, Dunia’s main mission is to reunite the village. She makes friends with the local children and they devise a plan to bring the villagers together, by creating the impression that she truly is a witch and then revealing that it’s simply an illusion.

Speaking to Variety, the producer and director team explained that they were attracted to the project as a metaphor that shows how the Arab region can often be divided by different perspectives on the world, that easily lead to a blinkered vision of reality.

“Dunia is a very intuitive person and knows that the kids are different,” says Alsoghayer. “She has to unite her village because she doesn’t want to be alone anymore.”

The project’s director, Almusharrie, is a cinema programmer at King Abdulaziz Center for World Culture (Ithra) and project manager at the Saudi Film Festival.

He cut his teeth in the film world from 2010 onwards as a self-taught director, while filmmaking was officially banned, and wrote and directed 13 experimental shorts, many uploaded to YouTube.

His first breakthrough short was “No Escape” in 2019, which screened at various international film festivals and exhibition venues.

He is now also developing a TV series “Crow’s Nest,” about two lonely love gurus who fake their own marriage to host a reality TV show, that was awarded the MEMI (Middle East Media Initiative) residency at the USC School of Cinematic Arts in 2022, where he spent a six-week residency.

In January he will begin shooting the short film “Dead Man’s Court,” funded by the Red Sea Film Fund.

Alsoghayer is one of the new generation of Saudi filmmakers who have honed their skills through residency programs created in partnership between Saudi Arabia and leading European film schools. In 2018, she studied filmmaking in La Fémis in Paris, as part of the Saudi summer film school, funded by the first ever scholarship for 12 Saudi filmmakers, granted by the Saudi Film Commission. She then studied at the National Film and Television School in the U.K., with a scholarship from Ithfra.

She currently works as a producer and a film director between Amsterdam and Saudi Arabia and has shot several short films in Amsterdam, where she also works as a freelance producer.

Her short films have been screened at international film festivals, such as the Lift-Off Filmmaker Sessions at Pinewood Studios and the Red Sea Film Festival. She is currently developing her first animation feature, “Before You Leave,” in conjunction with the animation director, Hala Alhaid, for which she has received a development grant from the Red Sea Film Fund.

She produced one of the 11 shorts of Netflix’s New Saudi Voices – “The Day I Lost Myself,” by Rami Alzayer and was creative producer of the short “Little Bird,” by Khalid Fahad, which won Best Short Film in the Saudi Film Festival in 2021.

By securing $150,000 in funding for “Scapegoat” in the Red Sea Souk, the filmmakers now aim to continue the script development process and complete the funding. They aim to raise 80% of the budget locally in Saudi Arabia and the other 20% through a coproduction with Europe.

Almusharrie believes that now is the time to create new cinematic visions in Saudi Arabia.

“The crazy thing is that five years ago there was no cinema culture here. It’s almost surreal, as if cinema had just been born, as if we’d all just emerged from our cocoons. It feels like we have so many stories to tell.”
Alsoghayer adds that this is linked to the country’s skewed demographic, given that almost 70% of the population is under 30. “It’s normal for the young generation to clash with the established order. Especially nowadays. That’s what our film is about. As the winds change it causes tensions. This is the time for our stories.”