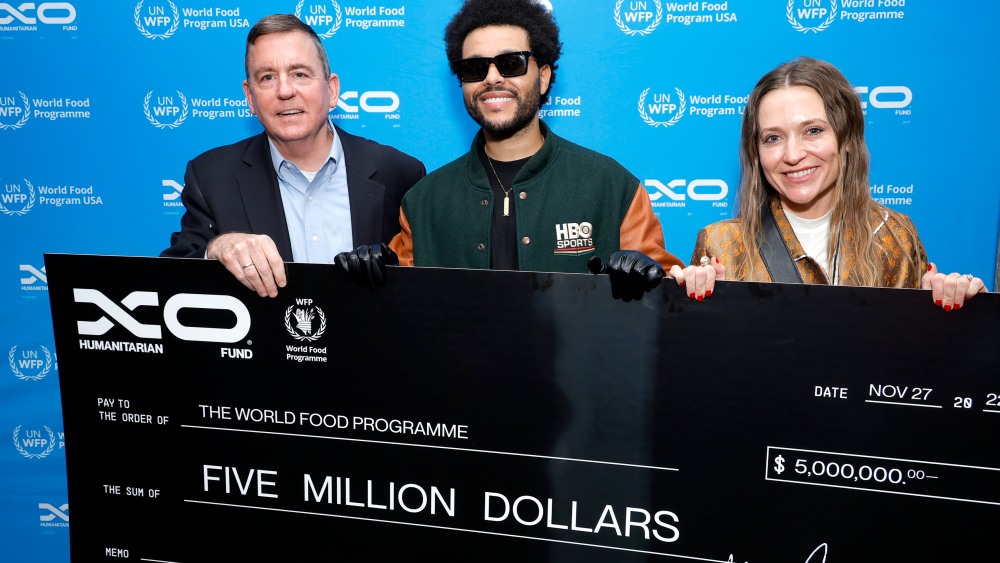 The Weeknd has announced European and Latin American dates for his After Hours Til Dawn tour, which belatedly wrapped its North American leg in Los Angeles over the weekend. Next year’s dates begin on June 10 of next year in Manchester, UK at Etihad Stadium. The newly announced European leg of the tour spans 21 cities and continues with six dates in Latin America’s most popular destinations before wrapping up in Santiago, Chile on Oct. 15 at the Estadio Bicentenario de La Florida. Additional 2023 dates will be announced soon.

The Canadian singer will again be partnering with the U.N. World Food Programme to raise funds from the second leg of the tour for his XO Humanitarian Fund, which supports the organization’s response to the global hunger crisis. The completely sold-out North American leg of the stadium tour, which grossed over $130 million dollars to date, raised money for the fund through exclusive tour t-shirt sales and a $500,000 donation directly from the Weeknd.

United Nations World Food Programme Goodwill Ambassador Abel “The Weeknd” Tesfaye will again partner with the U.N. World Food Programme to contribute funds from the second leg of the tour to the XO Humanitarian Fund, which supports the organization’s response to the unprecedented global hunger crisis. €1 from each ticket sold across Europe, £1 in the UK and the $1 equivalent in countries across Latin America will go to this important cause. The fund raised money during the North American leg of the tour through ticket sales, proceeds from an exclusive tour t-shirt, and a $500,000 donation directly from The Weeknd. The Weeknd’s corporate partners, tour venues, World Food Program USA board of directors and supporters also stepped up to contribute, as well as tour sponsor Binance, who contributed US$2 million to the fund. The first grant of $2 million will be going to provide emergency food and nutrition assistance to the most food-insecure regions of Ethiopia, reaching more than 75,000 people across those regions. The Weeknd presented a check to World Food Program USA during a private event at his After Hours Til Dawn Stadium Tour concert in Los Angeles.

“We are deeply appreciative and humbled by the Weeknd’s steadfast support, as well as that of his loyal fans and partners,” said Barron Segar, World Food Program USA president and CEO. “Abel is an inspiration to us all, and through his efforts, thousands of families will have food security and hope for a better future.”

“On stage and off stage, the Weeknd is bringing hope and happiness to millions of people across the globe,” said David Beasley, WFP executive director. “His inspirational XO Humanitarian Fund is a new dawn in the struggle to end global hunger at a time when we are seeing funding shrink and the threat of famine grow. As WFP’s Global Goodwill Ambassador, he is opening hearts and minds to our life-saving cause and offering millions the chance of a brighter tomorrow.”

The After Hours Til Dawn tour supports the Weeknd’s 2020 chart-topping album “After Hours,” as well as his fifth studio album “Dawn FM,” which was released in January this year. Kaytranada and Mike Dean will be joining the Weeknd on all European dates.

Ticket holders will receive souvenir NFTs, powered by Binance, as well as gain access to an exclusive NFT collection for the tour, in collaboration with HXOUSE. Five percent of the sales from the upcoming tour NFT collection will be donated to the XO Humanitarian Fund.

Tickets for the European shows go on sale starting Friday, Dec. 2 at 12 p.m. local time. Fans who purchased tickets for 2022 After Hours Arena Tour in Europe can register for presale access to the 2023 dates. Visit the EU FAQ page for any questions.