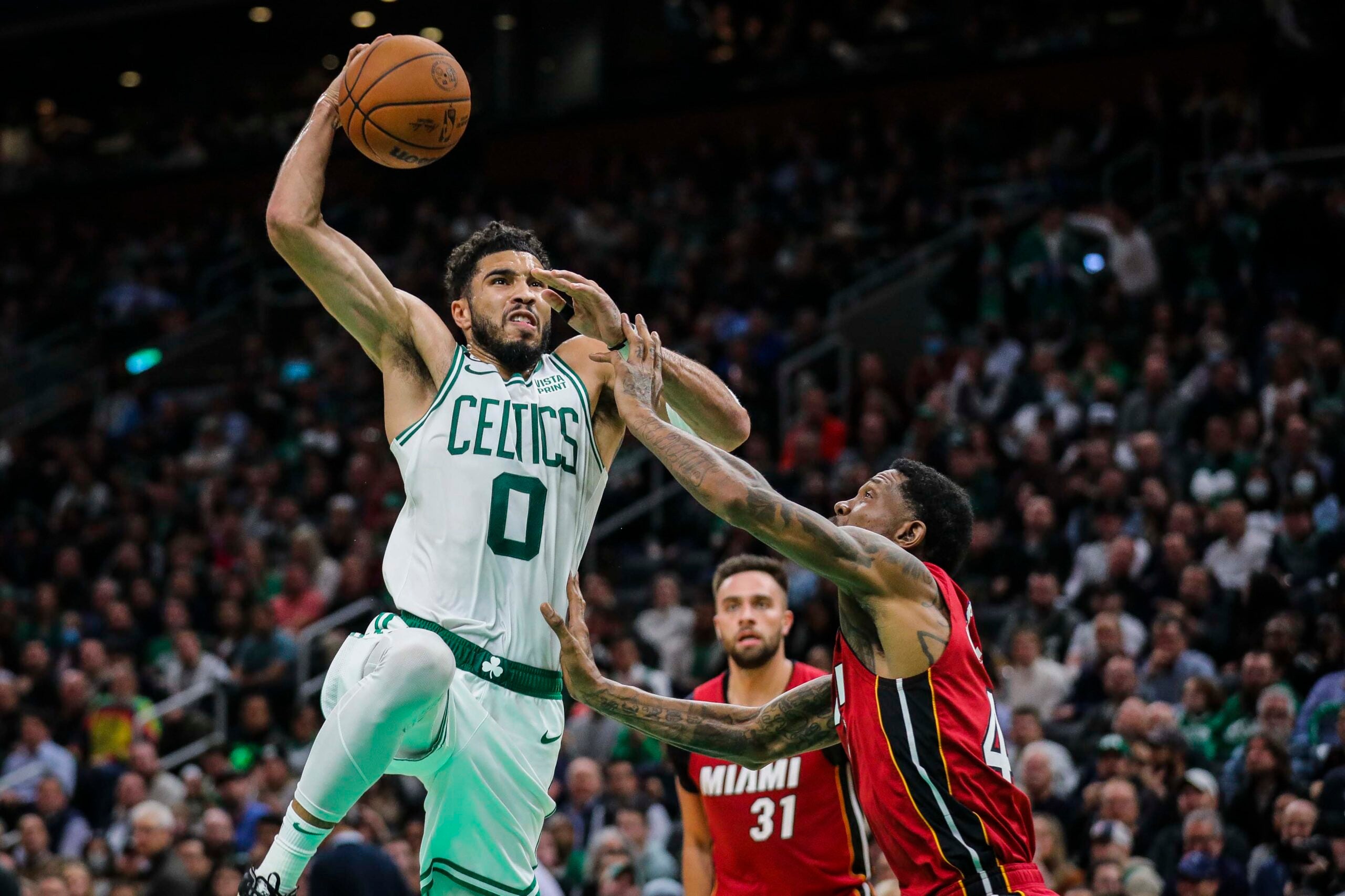 The Celtics held off a Heat team that refused to go away on Wednesday, claiming a 134-121 victory that boosted their record to 18-4.

With the Prince and Princess of Wales sitting courtside next to Boston Mayor Michelle Wu and Governor-elect Maura Healey, the Celtics put on a show. They got out to a blazing start, jumping on top by double digits almost immediately with a 20-5 run. But the Heat foreshadowed their evening right away, answering Boston’s run with a 21-6 stretch. The teams spent the rest of the first half answering each other’s runs, and the Celtics took a 68-60 lead into the break.

The Heat stayed attached for the rest of the evening, despite the brilliance of the Celtics’ stars. But Tatum and Brown combined for 19 fourth-quarter points as the Celtics pulled away for the win. As time wound down, a frustrated Bam Adebayo picked up a pair of technicals, which gave Tatum a chance to pad his scoring stats. With their star at 49 points, however, the Celtics dribbled out the clock.

“I already got a 50,” Tatum could be seen saying to Kyle Lowry as he walked off the floor (he has four of them, actually, including a 60-pointer).

Star of the Game

Who else? The Prince and Princess of Wales witnessed the brightest star power the NBA has to offer this season.

The Celtics won the front end of their odd little two-game series against the Heat. Friday will be an interesting test of the Celtics’ ability to adjust in a series setting.

“Defensively, they had a great game plan against ours, so us against that will have to be better Friday than that,” Mazzulla said. “But guys did a great job kind of navigating adjustments on the fly and then just playing hard throughout the game.”

1. One of the reasons Jayson Tatum is an MVP candidate this season is because on his off nights, he still finds a way to score and contribute to wins.

But one of the reasons Tatum turned into a superstar in the first place is because there are nights when he puts everything together and is simply one of the best players on the planet. Wednesday’s game was one of those nights. The Heat couldn’t do anything about him around the rim. He made eight of his 12 3-point attempts. He forced his way to the free-throw line 12 times. He hit the glass. He was the answer against a Heat zone that flummoxed the Celtics at times. He scored by cutting off the ball (starting on the first play of the game).

“There’s about 15 or 18 points a game he’s getting just because of what he’s doing without the ball,” Joe Mazzulla said. “I think it’s just as much about that. How do you play because you’re a great player or how do you make the people around you better?”

“Undoubtedly, he should be leading the MVP race right now,” Malcolm Brogdon said. “I mean, he’s playing at a at a superstar level.”

2. According to Tatum, Joe Mazzulla shows the team a picture of a sand castle at every film session to remind them that every game is washed away after it happens. To win in the NBA, you always need to be building.

Tatum said the message resonates partly because the Celtics have “a great group”. In particular, he lauded Blake Griffin for his positive attitude and his willingness to do things like take the first bus to the arena on the road and play pick-up on off days with two-way players.

“That’s not necessarily always normal,” Tatum said. “Especially for somebody that has accomplished what he has and made the money that he has, for him to still have that mindset of team first and just being a great teammate, just little things like that that we all notice and everybody shows that in one way or another. So we just got a really great group of selfless guys on this team that just want to win.”

Meanwhile, the sand castle message is “cheesy” but effective.

“It’s something that we’ve bought into, and just that it’s a choice that we’ve gotta make every day when we come in and try to be the best version of ourselves,” Tatum said. ” … Joe’s done a great job of not letting us be satisfied or complacent. Which we aren’t. Coming off a finals loss we know what the ultimate goal is. But just trying to take the right steps along the way in getting back to that point.”

3. As is often the case against the Heat, the Celtics needed to get out in transition, and they won that battle 20-4, scoring 1.83 points per transition opportunity.

The Heat had plenty of opportunities to close that gap — the Celtics turned the ball over 17 times.

4. Brown was responsible for six of those turnovers, but he still managed to have a solid game around first-half foul trouble. He scored 26 efficient points on 10-for-18 shooting (9-for-12 from inside the arc), including 11 in the fourth quarter as part of an instrumental stretch where the Celtics made sure they wouldn’t be fighting for their lives in the final minutes.

One important difference in Brown’s turnovers: He was only stripped twice. Three of the other turnovers were offensive fouls, and he stepped out of bounds once — meaning just two were transition opportunities for the Heat.

5. Over his last five games, Malcolm Brogdon is scoring 16 points on 58.3/68.2/90.0 shooting splits — an absurd stretch of flame-throwing that boosted his season average to 49.3 percent. He’s shooting 53.2 percent from deep over his last 15 games after going 5-for-7 against the Heat.

Al Horford, meanwhile, shot 2-for-4 from three, which actually dipped his 3-point percentage from 55.8 percent over the last 10 games.

At some point, stats suggest the Celtics will regress, but they are generating a lot of good looks. A reporter asked Mazzulla after the game what the Celtics are doing well, and what might be a little lucky.

6. If you were wondering, the royalty in attendance — who are in Boston for three days — appeared to have a great time.

“The Prince and Princess will be back on Friday,” Mike Gorman quipped on the NBC Sports Boston broadcast.

The Celtics face the Heat again on Wednesday. It remains to be seen if Jayson Tatum’s newest fans will be in attendance.