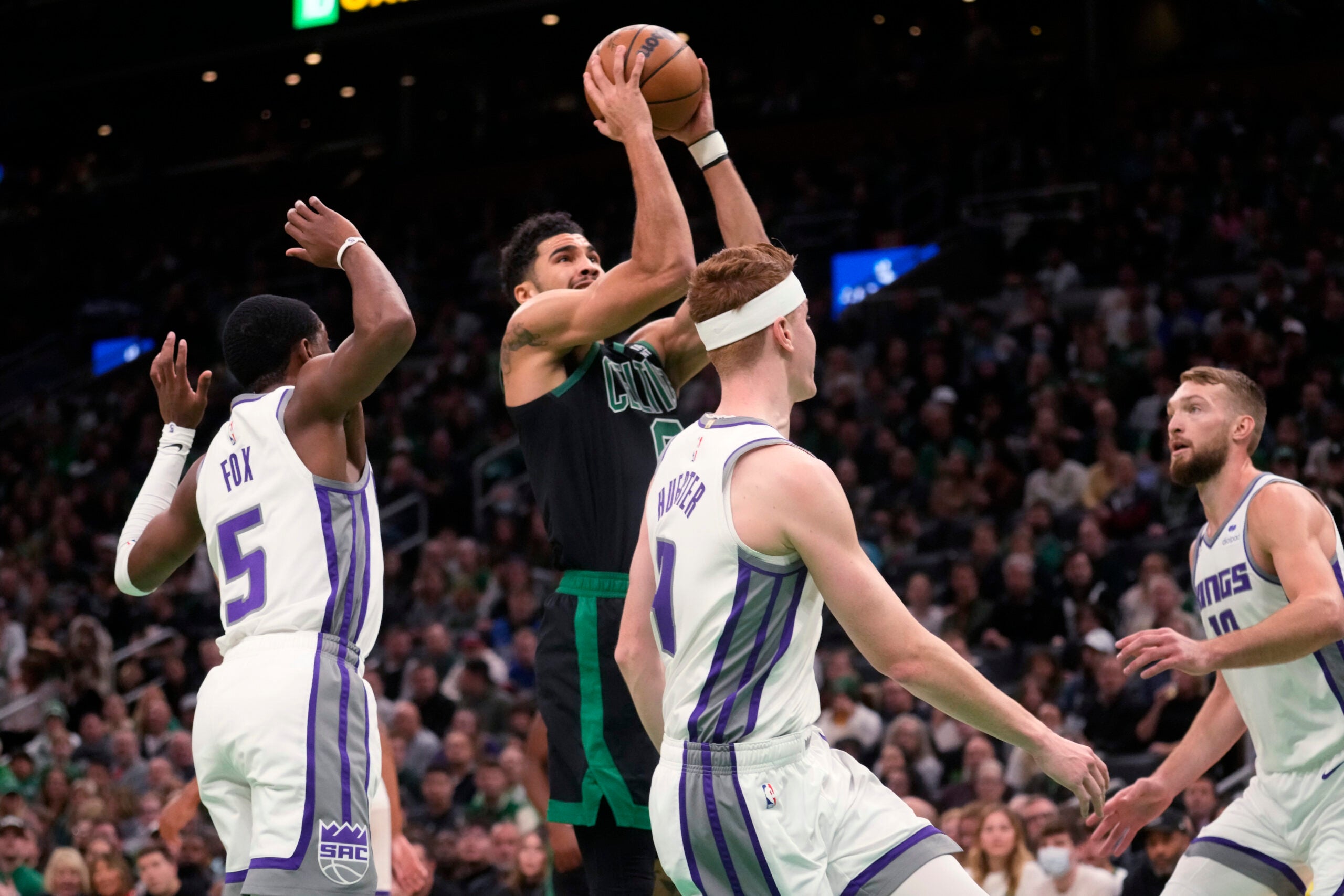 The Celtics needed three quarters and a big boost from an energetic bench duo to take down the Kings on Friday, but they pulled away late for a big 122-104 victory.

1. The Celtics started strong, putting together a 36-22 first quarter before the Kings chipped their way back into the game and the lead. After the Kings surged ahead 84-78 late in the third quarter, Jayson Tatum clapped his hands together and barked at someone — either teammates to inspire a little more energy, or in frustration at the Kings after they committed a shooting foul that sent him to the free-throw line.

As Tatum stood at the free-throw line, Joe Mazzulla made what proved to be the most consequential decision of the game: He subbed in Luke Kornet and Payton Pritchard.

The result was one of the most dominant stretches of the Celtics’ season. Over the final 3:12 of the third quarter, the Celtics put together a 16-0 run and took a 10-point lead. In the first five minutes of the fourth quarter, they built that run to a staggering 35-4, taking a 113-88 advantage. When the final buzzer sounded, Pritchard was +21 in 15 minutes, while Kornet was +19 in 12 minutes.

“We talked about it from day one: We have a lot of different ways we can go,” Joe Mazzulla said after the game. “Credit to both Payton and Luke for what they do on a daily basis to stay ready, and credit to the rest of our team for accepting that. And I think it says a lot about where we can go with our team.”

TD Garden swelled with anticipation when Kornet and Pritchard went to the scorer’s table, as if everyone in attendance could instantly tell what two spot-rotation players would mean to the game. The fans were quickly rewarded for their faith: Pritchard scored five of the Celtics’ next seven points after checking in, including an enormous 3-pointer.

“I love it,” Pritchard told reporters. “I know they love me here, and I love that about Boston. I definitely appreciate it.”

Pritchard has consistently provided the Celtics with a spark this season when called upon by Mazzulla. He might be a little too good for his role as a microwave off the bench, but it does seem to suit him perfectly.

2. Of course, as is often the case when the Celtics succeed, the real impetus behind the run was Jayson Tatum. After the little flurry by Pritchard, Tatum floated a lob to Kornet for a dunk when the defense collapsed on him — one of his four assists. Tatum then dropped in a floater of his own and banked in a 3-pointer on the final possession of the half, pushing the advantage to double digits. Defensively, he took on the De’Aaron Fox assignment in the third quarter and helped limit the Kings star to just six points on 1-for-7 shooting in the second half after Fox went 5-for-9 from the floor for 14 first-half points.

4. Luke Kornet made both of his field goals on Friday, including an impressive turnaround hook when an offensive possession in the fourth quarter broke down. That extended his streak of made field goals to 15.

Like Pritchard, Kornet has shown impressive resilience this season — whenever he’s called upon to contribute, he does so even though his minutes have been spotty.

Kornet, however, is not ready to claim credit for staying ready.

“I probably have a little bit of an advantage because I’m like, no matter what, I’m still 7-2,” Kornet said. “So it’s like other guys are sprinting around like crazy, so I feel like it’s really incredible for them a little more.”

Fair enough. Still, Kornet’s presence allowed the Celtics to shift their defense in a way that gave them an enormous boost in the final two quarters.

“When you have Luke in the game, you have a little bit more rim protection, less switching, so we switched a lot of the game,” Mazzulla said. “When you switch for the majority of the game, you maintain that same rhythm. I have to do a better job as a coach of changing up the rhythm of our defense if we want to switch as much as we do. And so when we went with Luke, we were able to kind of go to more of our traditional defense and our guys were able to be more physical and get into the ball and have rim protection. So I thought that helped.”

5. Both Grant Williams and Jaylen Brown picked up technical fouls. Williams is now up to four this season after coaxing one out of an official in the second half.

Mazzulla said he wasn’t worried about the mounting technicals, noting that the most important thing for the Celtics is to remain focused when they feel calls go against them.

“There’s like six yellow cards a game in the World Cup,” Mazzulla added.

Brown — who scored 25 tidy points and dished out five assists to go with two steals — said his mindset was crucial.

“A younger Jaylen might have looked at that opportunity to be pissed or to be mad because officiating was being called the way it was, whatever,” Brown said. “But that’s basketball. You come out and do your job. Period.”

6. The Celtics started Derrick White in place of Grant Williams for the second consecutive game after giving White the nod against the Mavericks. White scored 16 points on 6-for-11 shooting (3-for-7 from 3-point range) and recorded three steals.

Williams shot 1-for-8 and scored just four points off the bench in 44 minutes over the last two games, which cuts against his usual splits — Williams has shot 62.5 percent from the floor and 53.8 percent from behind the arc off the bench this season.

Mazzulla will have a lot of options when Robert Williams comes back. How he handles the starting lineup will be a fascinating one, because with White and Grant Williams — as well as Al Horford (13 points, 5-for-8 shooting) and even Pritchard and Luke Kornet — the Celtics’ rotation is crowded with a whole heap of talent.

The Celtics face the Wizards next on Sunday at 6 p.m.