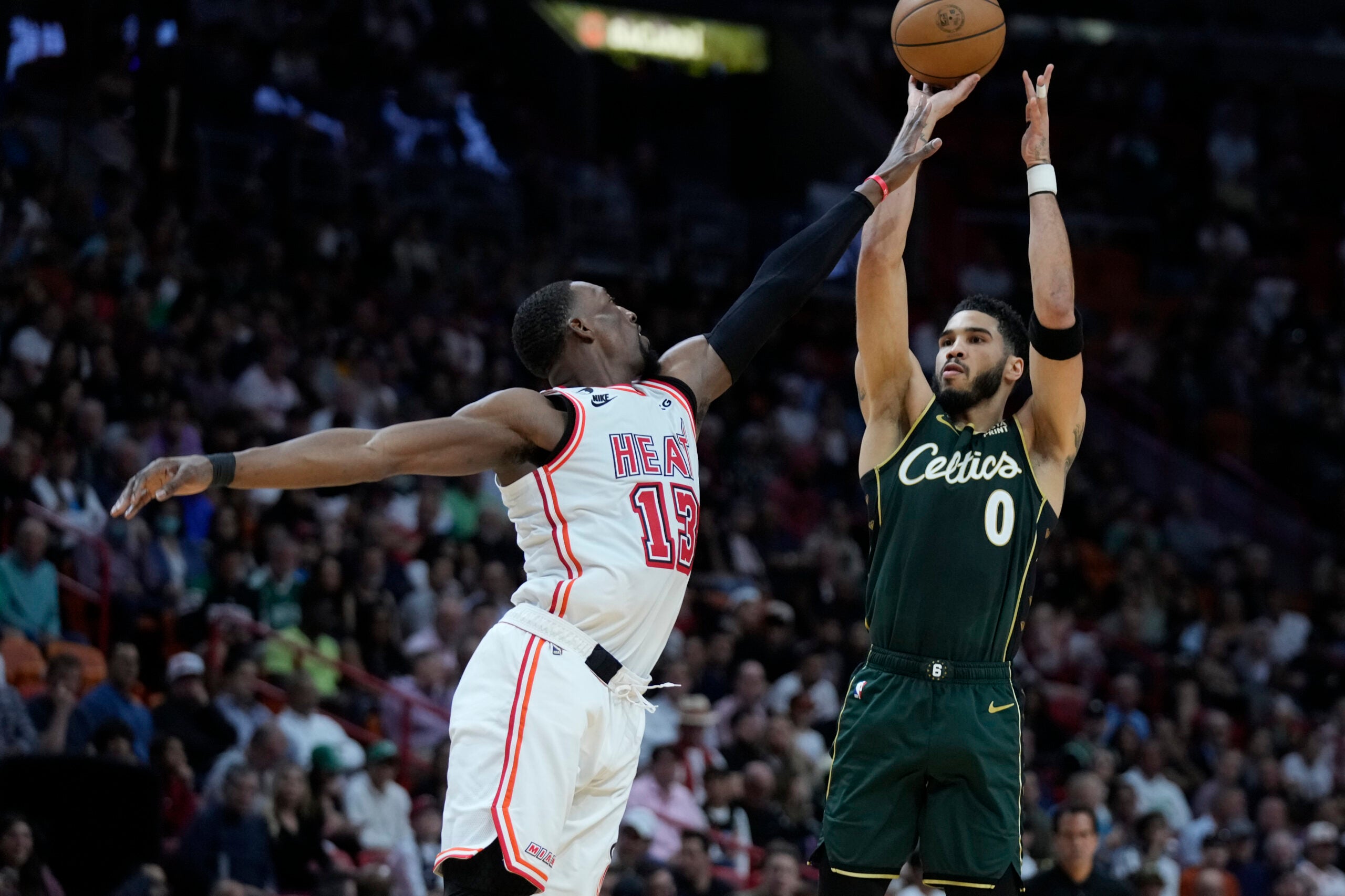 The Celtics lost their second consecutive game on Tuesday, falling to the Heat 98-95.

Here are the takeaways.

And yet, they still had every opportunity to steal a game from a scuffling Heat team that couldn’t buy a bucket from 3-point range. Tyler Herro finished 4-for-19 from the floor, which undersells how poorly he played. Max Strus — who tends to play pretty well against his former team — shot just 4-for-10 from the field. With 8:47 remaining, the Celtics led by 10 and Jayson Tatum was still parked on the bench, resting up for the fourth-quarter run. Things looked pretty promising.

Then the Celtics missed 10 straight field goals, going completely scoreless for nearly six minutes. The Heat took advantage, scoring 15 straight points to take a five-point lead against a Celtics team that looked like it lost its legs.

Meanwhile, Bam Adebayo took over the game late — a dominant defensive performance, coupled with nine of his 30 points and eight of his 15 rebounds in the fourth quarter.

And still, the Celtics had multiple chances late. Down two in the final 20 seconds after Adebayo buried a mid-range jumper, Jayson Tatum dribbled out most of the clock and tried to find Grant Williams in the corner, but his pass was picked off by Tyler Herro.

“That’s on me, to put him in a better situation,” Joe Mazzulla told reporters after the game. “But I thought they had their offensive lineup on the floor. I knew they weren’t going to let him get something, but if we could get two on the ball … but again, I’ve got to put up a better play that kind of allows him to see that better. He couldn’t see the 2-on-1 well enough. So I’ve got to call a better play there.”

Then, after the Heat went 1-for-2 at the free-throw line, Payton Pritchard got a half-decent look but came up short on what would have been the tying triple at the buzzer.

For all of those reasons, Celtics fans may have found Tuesday’s game particularly aggravating. The loss itself doesn’t matter much — the Celtics remain the league’s best team in record and net rating, and any big-picture concerns are mitigated significantly by all of the absences. But going scoreless for more than five straight minutes will, of course, always have consequences.

2. Jayson Tatum scored 31 points on 9-for-18 shooting, recorded seven assists, and was excellent in the second and third quarters, but the Heat effectively froze him out of the fourth after he returned from his usual rest at the start. Tatum finished with just three points, and the last of his seven turnovers — which came at the end of a confusingly lengthy iso possession — was one of the worst crunch-time plays we can remember.

“I think not calling a timeout was smart,” Tatum told reporters. “It’s on me. They trust me in that situation to make the right play. Regardless of being in a double team or not, I can’t let us down like that.”

Everyone has the occasional tough stretch, and Tatum is no exception, but it was a less-than-inspiring performance after three quarters of excellent basketball by the Celtics’ star.

3. As a team, the Celtics turned the ball over 17 times, which gave the Heat social media team an opportunity to call back to a highly controversial tweet from the weekend following the Cowboys’ loss to the 49ers.

The Cowboys’ social media team, of course, unleashed an oddly savage tweet about their own quarterback, Dak Prescott, noting that he “gave away the ball twice in the narrow loss to the 49ers, in a matchup the Cowboys had a chance to win if they didn’t again generate self-inflicted wounds.”

4. Not for the first time (or the second time, or the third time) this season, Derrick White showed the wide range of value he provides the Celtics when he’s on the floor. Playing in an expanded role, White finished with 23 points on 7-for-17 shooting with six assists and scored in a variety of ways — splitting apart Miami’s zone for a number of floaters, while burying a pair of 3-pointers and working his way to the free-throw line eight times.

The Celtics don’t need White to be a primary scorer often, but the flashes of potential he shows when necessary are an intriguing wrinkle from a player who is under contract for two more seasons after this one.

5. Payton Pritchard might not have had the energy to get his final 3-pointer to the rim — after playing a season-high 30 minutes against the Magic on Monday, he played 42:28 against the Heat, which is the second-highest minutes total of his career.

Pritchard struggled with extended minutes, shooting a combined 6-for-20 and 3-for-13 from behind the arc, but he did pull down seven rebounds and dish out four assists against the Heat.

6. The Celtics’ locker room feels like it can probably survive a loss or two.

Per Himmelsbach, Smart said he had no idea where the jab came from and suggested the Celtics limit Mazzulla’s sugar intake.

7. The Celtics started a 12-out-of-17 stretch of games on either TNT, ESPN, or ABC on Tuesday. The national TV crowd will get a huge dose of the league’s best team over the next few weeks.

That includes the Celtics’ next game. They will play on TNT against the Knicks on Thursday, tipping off at 7:30 p.m.