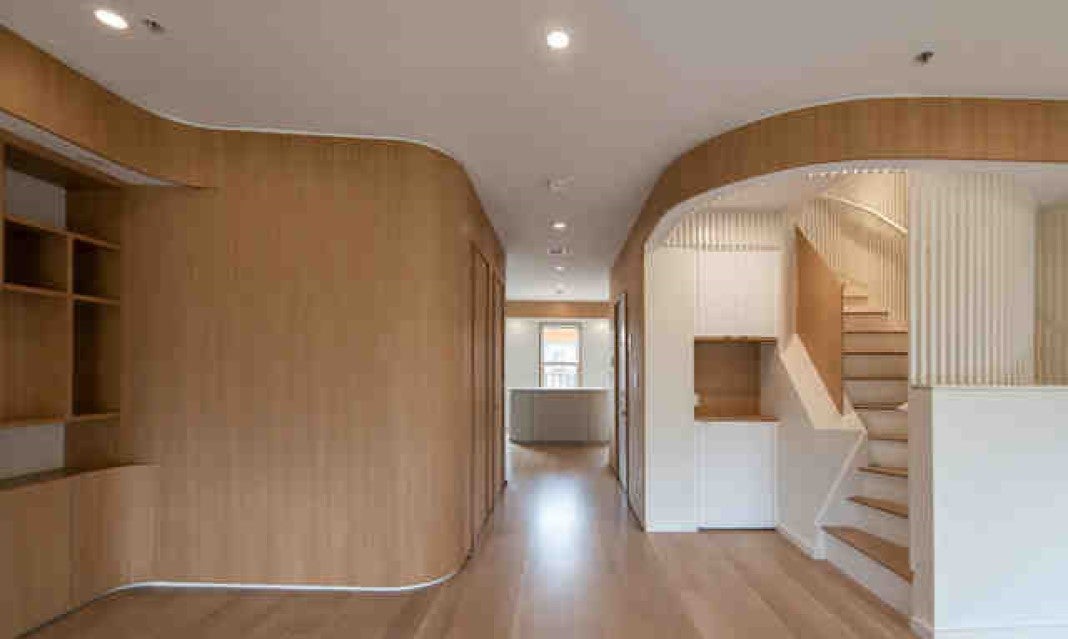 Architect Nima Yadollahpour loves a curve. So, when the ONY Architecture principal realized that the rounded wall in this South End condo’s kitchen would have to remain (the flip side is a common area landing), he ran with it.

“The existing curved wall next to the entrance that led to the kitchen was the cue for the entire concept,” Yadollahpour said. “We gutted everything else.”

The 1,531-square-foot two-bedroom penthouse duplex is one of six units at 50-52 Rutland Square, an 1860 redbrick town house. Inside the airy fifth- and sixth-floor unit, rift-sawn white oak walls and floors envelop you, while sun streams in from either end. Embedding the new HVAC system in the ceiling freed up floor space, allowing Yadollahpour to widen the entry and enlarge the kitchen. “Now there’s a better connection physically and visually between the kitchen and living space,” the architect said.

A large closet and full bath sit across from the entry door, while that original curved wall, now clad in rift-sawn white oak, leads to the kitchen. Sleek, glossy white cabinetry stretches along three walls, and a rift-sawn white oak soffit snakes around the top of the room. Appliances include a Wolf cooktop and Sub-Zero refrigerator, freezer, and 102-bottle wine fridge. A furniture-like island with softly rounded corners is the centerpiece.

Yadollahpour replicated the curved, rift-sawn white oak kitchen wall in the living room, where it unfurls as asymmetrical bookshelves flanking a wood-burning fireplace with a striking black-honed granite surround. “I wanted the oak to seem like wrapping paper that tears apart to reveal the shelves,” Yadollahpour said.

A white, vertical, slatted screen lines the staircase to the second level. Then, the rift-sawn white oak ribbon picks back up, winding its way into the primary bedroom. Like the living room below it, the bedroom features a bay window overlooking the picturesque street. Clean-lined, push-front cabinetry provides ample clothing storage. The second bedroom boasts a similar setup.

Both bedrooms access a spacious bath that has a double vanity with a teak countertop, as well as a walk-in shower, water closet, and laundry. A full stair sweeps up to a private roof deck with spectacular city views, and back at ground level is a full parking space.

See more photos of the property below: