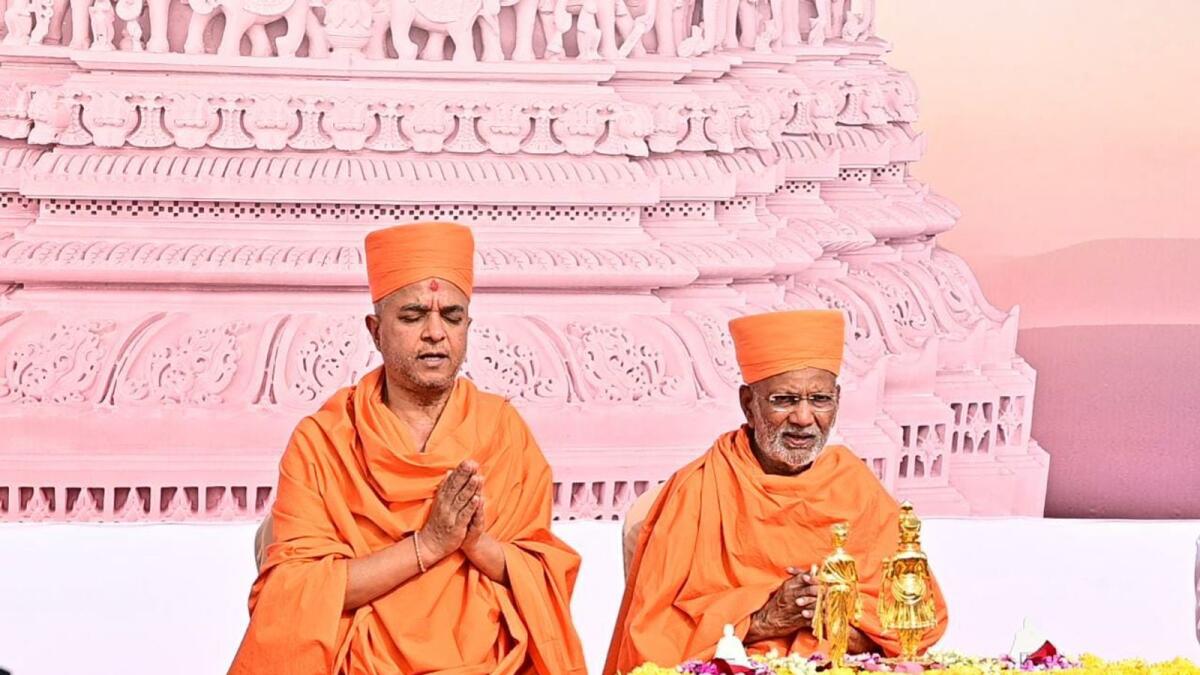 The UAE’s first traditional Hindu stone temple will be made open to the public in February 2024, a top envoy said.

Indian Ambassador to the UAE Sunjay Sudhir is optimistic that despite the challenges faced by Covid-19 pandemic the BAPS Hindu Mandir will be completed in less than two years.

“This temple is a story of love and collective aspirations of the people. It’s a story of harmony as different communities are involved. The temple will be opened in February 2024,” Sudhir said during the ‘Mahapeeth Pujan Vidhi’ – a religious ceremony to place the first sandstone on the first floor of the temple. It marks the next stage of construction after the works on the ground floor consisting of 14 layers have been completed.

“This is a historic day. This is because of the graciousness of the Royal Family, President His Highness Sheikh Mohamed bin Zayed Al Nahyan and Indian Prime Minister Narendra Modi. The stories etched in stone by the artisans and architects will inspire everyone that visits the temple. It is an exemplary example of the commitments of the leaders of UAE towards building an environment of peace and tolerance and ensuring that all residents of this country feel at home,” he said at the under-construction temple in Abu Mureikhah, off the Dubai-Abu Dhabi highway.

In his address, Swami said: “Today is historic for a few reasons. Today (May 27) is the 130th birth anniversary of Yogiji Maharaj. Shikhars (spiral structure) will start from here (second floor). Those gathered here are unique human beings to have touched the shikhar (stone) of one of the path-breaking Hindu temples in the world.”

This phase of construction will shape the ‘garbhagruha’ (inner sanctum) – the central shrine in a temple, which houses the deities. Sadhus recited Sanskrit verses while praying for the timely completion of the temple, which will be open to people of all faiths.

Swami pointed out that the temple is being built by 3,000 craftsmen under the supervision of 10 priests.

“Thousands of residents come here every Sunday to place bricks. This is a result of everyone’s love, effort, perspiration and inspiration.”

The temple is being constructed on the land gifted by Sheikh Mohamed. The foundation stone of the temple was laid in April 2019 and work started in December.

“When we dug just three feet, we found a bedrock of stone,” he said pointing to the solid base for the temple.

A mobile medical service, in collaboration with Aster Volunteers and Aster DM Healthcare, was also arranged on the site. The craftsmen working at the temple and visitors were offered a free health check-up, where their vital signs were assessed and later, they could consult doctors in the mobile clinic.