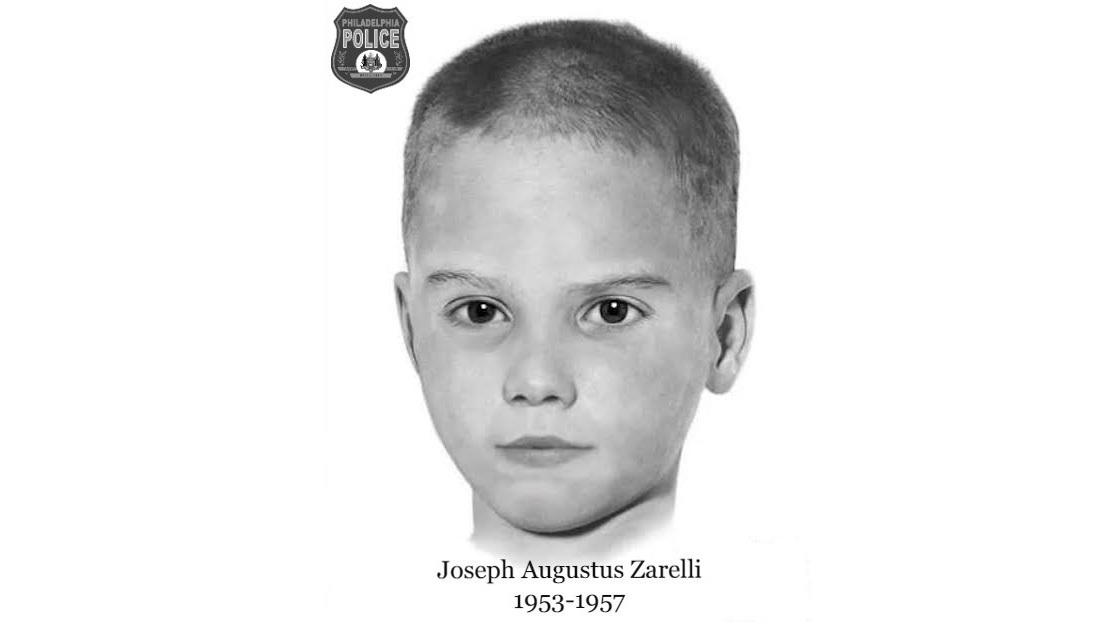 He was found severely beaten, naked, malnourished and stuffed inside a cardboard box on the side of a Philadelphia road. The brutality of his death shocked people’s consciousness – and the question of his identity for decades vexed both area residents and investigators alike.

Now the boy, whose headstone for years read only “America’s Unknown Child,” is finally known. Citing advancements in DNA technology, law enforcement officers and genealogical experts on Thursday put a name to the “Boy in the Box:” Joseph Augustus Zarelli of West Philadelphia. Born on Jan. 13, 1953, Zarelli was only four years old when he was murdered and his body abandoned in a wooded area in 1957.

After decades of investigation, the name of ‘America’s Unknown Child’ has been revealed: Joseph Augustus Zarelli. NBC10 investigative reporter Claudia Vargas shows us how detectives were able to uncover his identity.

“Now our lad is no longer that ‘Boy in the Box.’ He has a name, and I was raised to believe that when you say the name out loud of a loved one, that person still lives in spirit amongst us,” said Bill Fleisher, of the Vidocq Society. “Soon, through the good offices of Mr. Dave Drysdale and his team at the Ivy Hill Cemetery, the Vidocq society will put a name on that child’s grave. Joseph Augustus Zarelli will no longer be that ‘Boy in the Box’ and will no longer be unknown.”

The Vidocq Society is a volunteer group that provides assistance to law enforcement officers in resolving cold cases. Zarelli’s case had gone cold for 65 years, and many people who worked on it died as the decades dragged on.

Over the years, the mystery surrounding his identity led to some wild conjectures. Some thought he may have even been a Hungarian boy who arrived in the United States during the 1956 Hungarian Revolution, Fleisher previously told NBC10.

More than six decades after a child was found dead and abandoned in Philadelphia, police have identified the “Boy in the Box” and are expected to reveal his name next week, sources confirmed with the NBC10 Investigators. NBC10’s Claudia Vargas has the details.

“When people think about the ‘Boy in the Box,’ a profound sadness is felt, not just because a child was murdered but because his entire identity and his rightful claim to own his existence was taken away,” Philadelphia Police Department Commissioner Danielle Outlaw said. “And despite not knowing his name for 65 years, this child’s tragic story was always remembered by the community, the Philadelphia Police Department and our partners.”

After being buried, Zarelli’s body was exhumed in 1998 – by which time DNA technology had advanced significantly – and a postmortem examination was conducted. Portions of his remains were retained for further investigation, but complicating the case was the fact that the boy’s DNA had degraded, PPD Capt. Jason Smith said.

The 2019 results were uploaded to DNA databases and “interpreted” by genealogists working on the case, Smith said. Based on the results, detectives were able to track down possible relatives of Zarelli on his mother’s side. More testing and investigation followed, which led to the identification of Zarelli’s mother.

Through a court order, detectives were then able to obtain from the state the birth, death and adoption records of all the children born to the mother between 1944 and 1956. The order yielded “responsive results:” the birth certificates of two children born to the mother and who were previously known to investigators, one of whom had provided a DNA sample, Smith said.

More than six decades since a child was found dead and abandoned in Philadelphia, police have identified the “Boy in the Box” as Joseph Augustus Zarelli. Investigators also uncovered family ties and possible medical procedures on the child’s body. NBC10’s Deanna Durante has the story.

Zarelli’s father was identified after genealogists established DNA connections on both sides of the family that could point only to that progenitor, said Colleen Fitzpatrick, the founder and president of Identifiers International, which specializes in genetic genealogy.

After more than 60 years, Philadelphia police will reveal a major breakthrough in the infamous “Boy in the Box” cold case. Police plan to reveal the identity of the child who was found dead in a box in the city’s Fox Chase neighborhood back in 1957. NBC10 investigative reporter Claudia Vargas tells us more about how police made the breakthrough.

“Dr. Chu indicated that based on the facts presented and the conclusion of the genetic genealogists, the death certificate for the unknown child, OME No. 57-0863, would be amended to reflect the child’s birth name: Joseph Augustus Zarelli,” the police captain said.

While detectives have determined the identities of the boy’s parents – both now deceased – they will not publicly disclose them yet out of respect for Zarelli’s living siblings, Smith said.

What he would say is that Zarelli had lived near the intersection of 61st and Market streets in West Philadelphia and was never reported missing. After his death, he was found in the Fox Chase neighborhood, in the northeastern portion of the city. The area has since been developed with homes.

Zarelli had blue eyes. When police found his body on the side of Susquehanna Road, he had brown hair that was “crudely cut close to the scalp,” Smith said. His body was bruised, and an autopsy revealed he had suffered “multiple abrasions, contusions, a subdural hemorrhage and pleural effusions,” according to the captain.

“In his very short life, it was apparent that this child experienced horrors that no one – no one – should ever be subjected to,” PPD Commissioner Danielle Outlaw said.

Identifying the child is only the first step in what remains an active homicide investigation, one that Smith acknowledged may never be solved. Investigators hope someone who may remember the boy will come forward to provide clues about who may have killed him.

“We may not make an arrest. We may never make an identification. But we’re going to do our darndest to try,” Smith said.

The PPD’s Office of Forensic Science has now established a forensic genetic genealogy program to assist the department and the Philadelphia Medical Examiner’s Office with investigations involving the identification of human remains or unknown suspects in criminal cases, said Gallagher, the PPD’s forensic laboratory manager.

The program has initiated tests in “dozens” of cases, ranging from 1957 to 2022, Gallagher said.

“Joseph Augustus Zarelli represents the first identification of human remains using forensic genetic genealogy as a result of this collaboration,” he said. “While this is the first, it will definitely not be the last identification that is made. Our goal for the project is that there will never be another unidentified homicide victim in the City of Philadelphia.”

Community members and cemetery caretakers paid their respects to Joseph Augustus Zarelli, who was finally identified 65 years after he was found dead and beaten in a box in Philadelphia. NBC10’s Miguel Martinez-Valle has the details.

Sign up for our Breaking newsletter to get the most urgent news stories in your inbox.