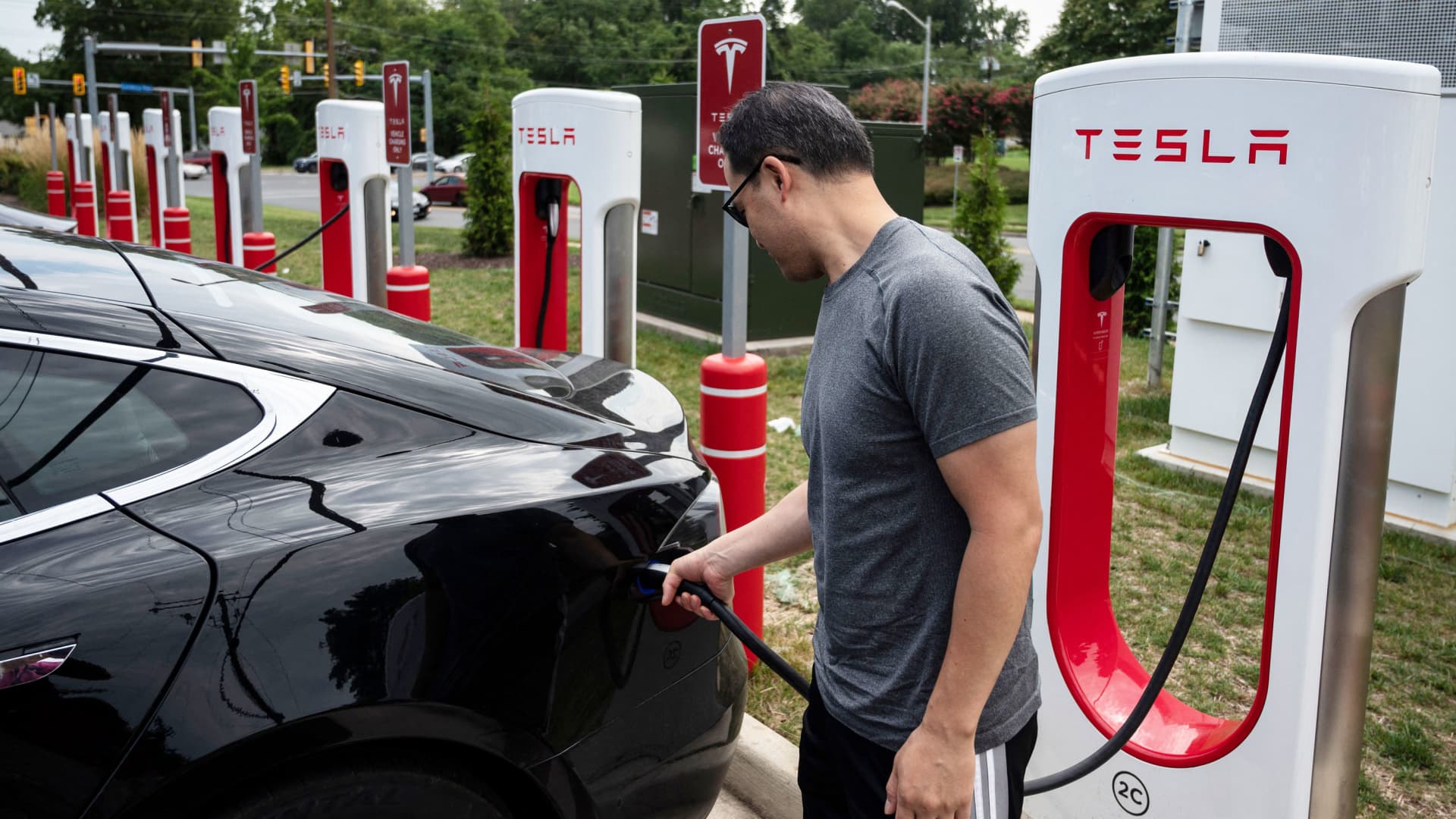 A man charges his car at a Tesla super charging station in Arlington, Virginia on August 13, 2021.

Earlier this year, the Biden administration allocated $5 billion to states to fund EV chargers over five years along interstate highways as part of the bipartisan infrastructure package. Under the plan, entitled the National Electric Vehicle Infrastructure Formula Program, states provided their EV infrastructure deployment proposals to the Joint Office of Energy and Transportation.

States are now approved to construct a network of EV charging stations along designated alternative fuel corridors on the national highway system and have access to more than $1.5 billion to help build the chargers.

It’s unclear how many charging stations the funds will support, and states have not yet shared specific charger locations. Transportation Department officials have said that states should install stations every 50 miles and ensure each station is located within one mile of an interstate highway.

“We have approved plans for all 50 States, Puerto Rico and the District of Columbia to help ensure that Americans in every part of the country — from the largest cities to the most rural communities — can be positioned to unlock the savings and benefits of electric vehicles,” Transportation Secretary Pete Buttigieg said in a statement.

The White House has put about $135 billion toward electric vehicle development and creation and is aiming to build a national network of 500,000 EV charging stations by 2030. Tax credits included in the recently passed Inflation Reduction Act will provide consumers with incentives to buy EVs.

Despite a rise in EV sales in recent years, the transportation sector is the nation’s largest source of greenhouse gas emissions. The lack of convenient charging stations is one of the major barriers for EV expansion across the country. The U.S. is the world’s third-largest market for EVs behind China and Europe.

The administration has touted EVs as more affordable for Americans than gas-powered cars and has set a goal of 50% electric vehicle sales by 2030, which will help its broader commitment to curb emissions in half by 2030 and reach net-zero emissions by 2050. The administration has also committed to replace its federal fleet of 600,000 cars and trucks to electric power by 2035.

California, the country’s most populous state and the center of U.S. car culture, in August banned the sale of new gasoline-powered vehicles starting in 2035. The state will likely face challenges to meet that timeline, such as installing enough charging stations and having adequate access to materials required to make batteries.

“With this greenlight, States, the District of Columbia and Puerto Rico can ramp up their work to build out EV charging networks that will make driving an EV more convenient and affordable for their residents and will serve as the backbone of our national EV charging network,” Acting Federal Highway Administrator Stephanie Pollack said in a statement.

Thanks to AI, it’s probably time to take your photos off the Internet