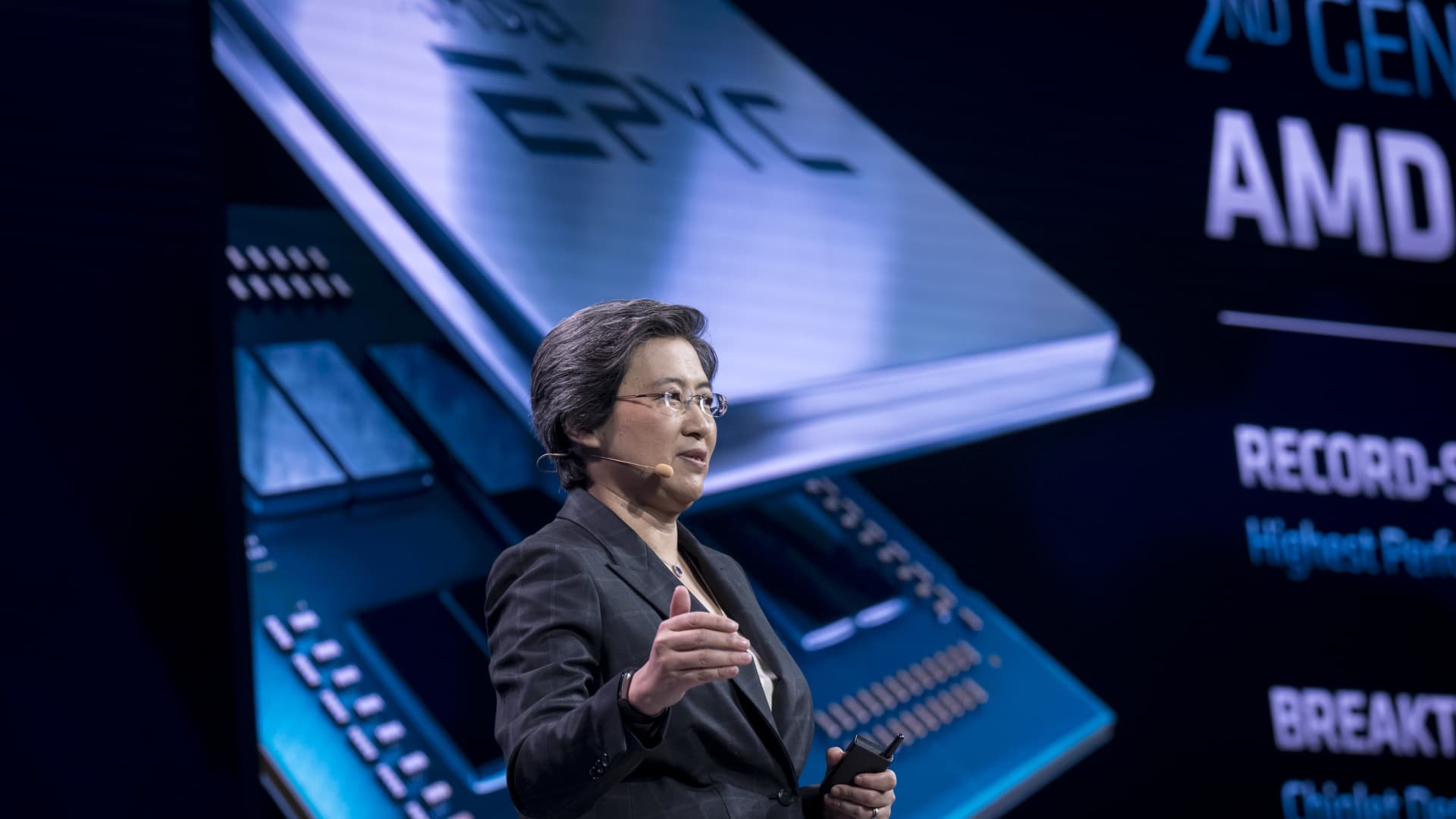 Advanced Micro Devices (AMD) is getting some love Monday in the form of upgrades from UBS and Baird, bolstering our recent decision to halt trimming any more of the chip designer’s shares. AMD shares rose 3% to start the week, riding a winning streak since last Thursday’s 14% jump in the broader market’s surge that day. However, AMD, like many of its peers, has been decimated on Wall Street, losing 48% in 2022. What UBS thinks UBS took its rating on AMD up to buy from neutral and raised its price target to $95 per share from $75, arguing the collapsing semiconductor cycle may be reaching a bottom. As evidence, analysts there pointed to shipments of central processing units (CPUs), which run personal computers, tracking “far below even the most bearish market forecasts for PCs in 2023.” That may not sound like encouraging news — but as members will recall, AMD and fellow Club holding Nvidia (NVDA) have been shipping chips to customers at a significantly reduced rate in order to help flush out bloated channel inventories. In fact, UBS analysts suggest it may even be possible that shipments fell to near zero in September. As a result, looking out to 2024, the analysts wouldn’t be surprised if PC shrinks to less than 20% of 2024 operating profits, down from about 50% in 2021, a factor they believe — and we agree — could provide for a re-expansion of the valuation multiple. Another sign of a possible bottom in the cycle is that we historically tend to see it happen after six straight months of downward estimate revisions. UBS noted that November will mark the sixth month. As chip stocks took a leg down late in the summer and into the fall, we last trimmed Qualcomm (QCOM) on Oct. 10, AMD on Oct.17 , and Nvidia on Oct. 31 — all of which carry our 2 rating . We also exited Marvell Technology (MRVL) on Nov. 3 . Looking at where investor focus should be coming out of a cycle bottom, the analysts broke the industry down into five subsectors: (1) memory, (2) compute, (3) networking/infrastructure/communications, (4) analog, and (5) semi capital equipment. For a closer look, here’s our Club guide to how the semiconductor industry works. According the analysts, “Overall, compute has been the top performing subsector off the bottom and has beaten the [Semiconductors & Semiconductor Equipment] index six of the past eight upturns with outsized returns in AMD/NVDA” and Intel (INTC) typically lagging. This analysis from UBS also bodes well for Nvidia, and we’ll be on the lookout for confirmation straight from management when the company reports its latest quarter after the closing bell Wednesday. In addition to updates on inventory levels and how much longer the flush out will take, we will be looking for more details in regard to adoption of the recently released A800 – the A100 variant designed to meet the new U.S. standards for sales in China — and how much of the loss in A100 addressable market the team believes it can makeup. What Baird thinks Over at Baird, where analysts boosted their price target on AMD to $100 from $65, the focus was on the company’s recent launch of Genoa, its new 5 nanometer Zen 4 data center CPU. Baird also upgraded the stock to an outperform (a buy-equivalent) rating from neutral. The analysts there are seeing a strong reception for Genoa with data center server manufacturers “shifting significant resources in support of AMD.” As a result, they expect the new chip, which marks a significant improvement in performance to accelerate AMD’s market share gains. Adding to their confidence that AMD market share gains will not only continue but accelerate, the analysts noted that “strong demand on cloud services in the past three years prevented some cloud OEMs [original equipment manufacturers] from decommissioning and performing architecture refreshes.” They believe that as these needed refreshes take place, thanks to the performance enhancements offered by Genoa, customers currently working on Intel Skylake-based servers will opt to make the leap to AMD over the next two years. After all, the success of a data center OEM is going to be tied to its ability to offer best in class solutions and that’s not possible if you are tied to supplier that can’t deliver like Intel, which has had its share of problems in recent years. Furthermore, the analysts called out Genoa’s higher price tag and higher gross margin profile, indicating that along with market share gains, AMD is setup for greater earnings potential over past generations. On the graphics processing unit (GPU) front, Baird also touched on AMD’s soon to be launched RDNA 3 GPU offering, calling out a more attractive price point versus Nvidia’s RTX40 series, a factor they believe will play well in the current marketplace, where consumers are increasingly cost conscious. Lastly, as it relates to AMD’s recently purchased Xilinx offerings, Baird analysts believe that 2023 will be driven by 5G wireless infrastructure offerings, though they added that “longer-term opportunities exist” for other types of chips, such as field-programmable gate arrays, “to proliferate in data centers as the software ecosystem continues to mature.” (Jim Cramer’s Charitable Trust is long AMD, NVDA and QCOM. See here for a full list of the stocks.) As a subscriber to the CNBC Investing Club with Jim Cramer, you will receive a trade alert before Jim makes a trade. Jim waits 45 minutes after sending a trade alert before buying or selling a stock in his charitable trust’s portfolio. If Jim has talked about a stock on CNBC TV, he waits 72 hours after issuing the trade alert before executing the trade. THE ABOVE INVESTING CLUB INFORMATION IS SUBJECT TO OUR TERMS AND CONDITIONS AND PRIVACY POLICY , TOGETHER WITH OUR DISCLAIMER . NO FIDUCIARY OBLIGATION OR DUTY EXISTS, OR IS CREATED, BY VIRTUE OF YOUR RECEIPT OF ANY INFORMATION PROVIDED IN CONNECTION WITH THE INVESTING CLUB. NO SPECIFIC OUTCOME OR PROFIT IS GUARANTEED.

Advanced Micro Devices (AMD) is getting some love Monday in the form of upgrades from UBS and Baird, bolstering our recent decision to halt trimming any more of the chip designer’s shares. AMD shares rose 3% to start the week, riding a winning streak since last Thursday’s 14% jump in the broader market’s surge that day. However, AMD, like many of its peers, has been decimated on Wall Street, losing 48% in 2022.