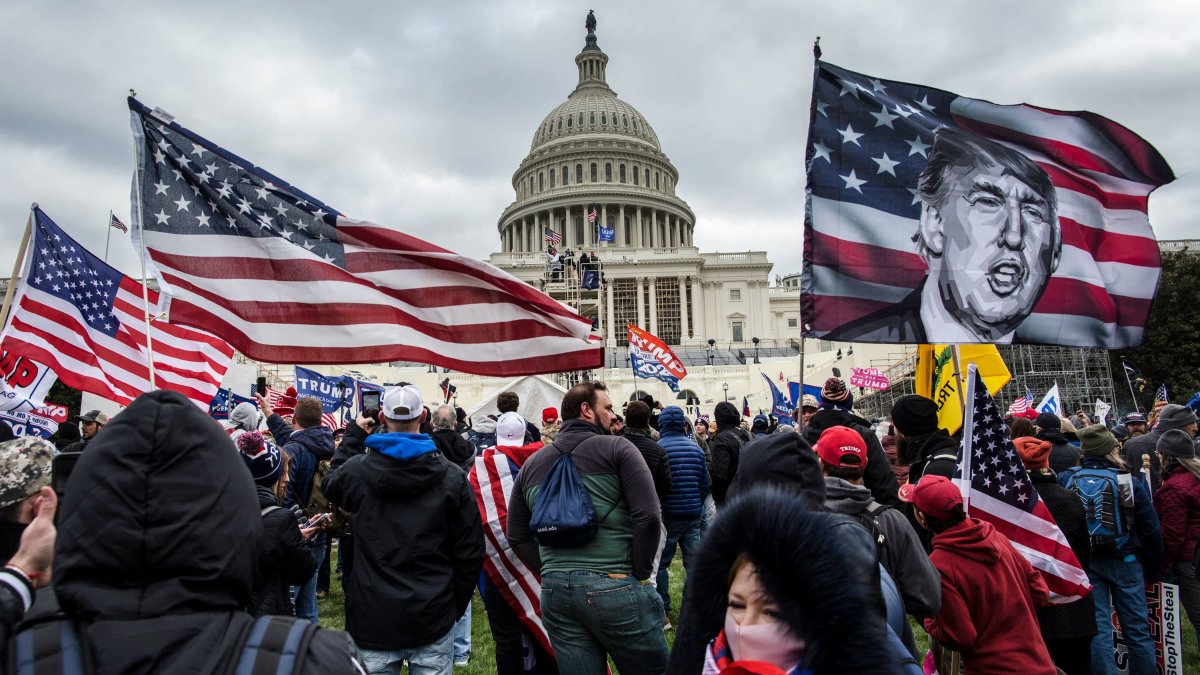 The House committee investigating the riot that swept over the U.S. Capitol on Jan. 6, 2021, began presenting a case Thursday that President Donald Trump knew he lost the 2020 presidential election but continued to falsely claim that it had been stolen from him while he worked to change the results.

The committee is making the argument that Trump was at the center of a “coordinated, multistep effort to overturn the results” of the 2020 presidential election that he lost to Joe Biden.

The committee offered never-before-seen video and eyewitness accounts to show that supporters of Donald Trump, among them the far-right group Proud Boys, were in Washington, D.C., to stop the transfer of power from Trump to Joe Biden.

“Jan. 6th was the culmination of an attempted coup,” the committee’s Democratic chairman, Bennie Thompson of Mississippi, said in his opening statement. “A brazen attempt, as one rioter put it shortly after Jan. 6th, ‘to overthrow the government.’ The violence was no accident. It represented Trump’s last, most desperate chance to halt the transfer of power.”

Even as Democrats were emphasizing the gravity of the attack, Republicans were trying to delegitimize the hearings.

House Minority Leader Kevin McCarthy of California called the committee the “most political and least legitimate committee in congressional history.”

Reps. Liz Cheney of Wyoming, the committee vice chair, and Rep. Adam Kinzinger of Illinois are the only Republicans on the nine-member committee. Both criticized Trump and voted to impeach him.

Thursday’s meeting was the first in a series of public hearings that the committee will hold.

Capitol police officer Caroline Edwards recounted being behind a bike rack and trying to hold back rioters at the U.S. Capitol on Jan. 6. “I turned to my sergeant and I stated the understatement of the century. I said, ‘Sarge, we’re going to need a few more people down here.’”

In the days after the 2020 presidential election, top aides to former President Donald Trump told him repeatedly there was no evidence of fraud sufficient to overturn the election.

Even as Trump continued to tell his supporters that the election had been stolen from them, Attorney General William Barr and others were contradicting his claims.

“I made it clear I did not agree with the idea of saying the election was stolen and putting out this stuff which I told the president was bullshit,” former Attorney General Bill Barr testified. Allegations that Dominion Voting Systems, a company that provided voting machines, was engaged in a conspiracy to change the results was “crazy stuff,” Barr said.

A former campaign lawyer, Alex Cannon, told the president’s chief of staff that the campaign staff was not finding sufficient irregularities to make a difference in any of the key states.

“So there’s no there there,” he said former Chief of Staff Mark Meadows responded.

Even Trump’s daughter, Ivanka, said she was persuaded by Barr’s comments.

One of the biggest revelations from the first in a series of congressional hearings about the deadly Jan. 6 U.S. Capitol riots was video of former Attorney General William Barr, Ivanka Trump and others acknowledging that President Joe Biden’s election was legitimate.

An Invasion of the Capitol

New video showed the violent attack on the Capitol, with rioters marching toward the building and then breaching metal barricades at Capitol.

Using police body cameras and other footage and police scanner audio, it showed them beating police, hitting them with flagpoles and other weapons. Officers could be heard calling for help.

U.S. Capitol Police officer Caroline Edwards, who suffered a concussion in the attack, recounted slipping in other people’s blood.

“It was carnage,” she said.

The rioters could be heard chanting “Hang Mike Pence” as lawmakers fled from the attack.

Rep. Liz Cheney, R-Wyo., delivered a scathing rebuke of former President Donald Trump on Thursday during a hearing held by a House committee investigating the Jan. 6 riot at the U.S. Capitol.

The Proud Boys and Oath Keepers led the invasion of the Capitol after Trump in a tweet called on his supporters to head to Washington, D.C. for a protest, the committee says.

Trump’s tweet on Dec. 19, 2020, was a “pivotal moment” that initiated the chain of events that led to the attack, Cheney said. Members of the Proud Boys and Oath Keepers, the leaders of whom have been indicted on sedition charges, drew the crowd into the Capitol, Cheney said.

“President Trump summoned the mob, assembled the mob and lit the flame of this attack,” she said in her opening statement.

Thompson said Trump was at the center of a “sprawling, multi-step conspiracy aimed at overturning the presidential election.”

Members of both groups were talking about the need to fight to keep Trump in office as early as November, according to court documents.

Documentary filmmaker Nick Quested said that a large group of Proud Boys marched from a speech Trump delivered on the National Mall to the Capitol. Thompson noted that they had left the mall before Trump began speaking.

“They weren’t there for President Trump’s speech,” Thompson said.

Donell Harvin, the former chief of homeland security and intelligence for the District of Columbia, says there was a “vast” amount of intelligence leading up to the Jan. 6 Capitol riots. However, there was a “failure to heed the intelligence,” he said, particularly by federal authorities.

Supporters: Trump ‘Asked for Us to Come’

In the final video of the night, Trump supporters are seen saying they stormed the Capitol on Jan. 6 because the former president had asked them to.

“He personally asked for us to come to D.C. that day,” said one supporter, Eric Barber. “And I thought, for everything he’s done for us, if this is the only thing he’s going to ask of me, I’ll do it.”

Barber, who has been charged with theft and unlawful demonstration, according to the committee, said he was disappointed Trump did not join the march to the Capitol.

Another supporter, John Wright, said, “I know why I was there, and that’s because he called me there, and he laid out what is happening in our government. He laid it out.”

Edited by Andrew V. Pestano. The Associated Press contributed to this report.