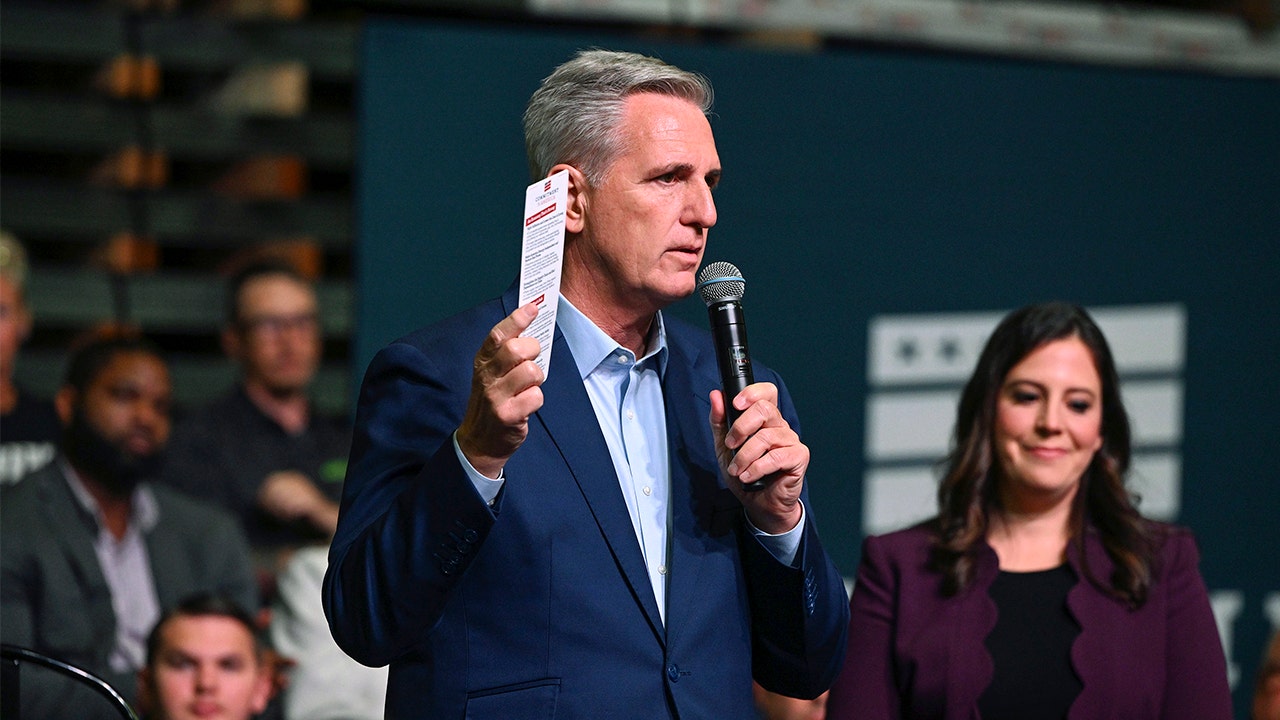 EXCLUSIVE: A conservative think tank linked to former President Donald Trump is challenging House Minority Leader Kevin McCarthy to balance the federal budget in the next Congress by cutting billions in “woke” federal spending, including any funds used to promote elements of critical race theory in public education.

The Center for Renewing America, which is staffed by former Trump administration officials, on Wednesday unveiled a budget blueprint with the aim of building support for the plan in the new Republican-led House.

“America cannot be saved unless the current grip of woke and weaponized government is broken,” the blueprint said. “That is the central and immediate threat facing the country—the one that all our statesmen must rise tall to vanquish.”

The budget proposes major cuts to what the group sees as “woke” programs and initiatives currently funded by the Biden administration. It proposes $9 trillion in spending cuts over the next decade.

Among other cuts, the plan calls for a 13% reduction in FBI funding in light of the agency’s purported abuses, including targeting parents as “domestic terrorists,” raiding the homes of pro-life activists and raiding former President Trump’s home. It would cut the Civil Rights Division and Environment and Natural Resources Division of the Justice Department and also eliminate the Office of Environmental Justice.

It would cut National Institutes of Health by 21%, in large part by removing “offices that are infused with critical race theory and gender theory.”

It would defund programs at Housing and Urban Development that promote “health equity” and “social justice,” end the “woke mandates” put in place at the Defense Department dealing with “radical gender theory” and “critical race theory,” and eliminate controversial programs at the State Department that promote drag theater performances, LGBT poetry readings and other events.

It would promote a dramatic cut of 25% across the entire Department of Education, which the report said has “equity” matters embedded “throughout the entirety of its operations.”

And it would eliminate funding for thousands of new IRS agents that President Joe Biden signed into law.

Under the proposal, the Environmental Protection Agency would be cut 30% and the Commerce Department would be cut 21%, in part because of its “climate extremism.”

Russ Vought said his group’s budget plan is aimed at showing Republicans how to fight harder for fiscal responsibility when the GOP takes control of the House next year.

But the Transportation Department’s budget would rise 10% to help boost infrastructure repairs, and more money would be given to beef up border security.

The proposal was written by Russ Vought, the president of the group who served as the director of the White House Office of Management and Budget under Trump.

“This budget is intended to show congressional Republicans how to frame the upcoming budget battles heading into the new year, show that balance can be achieved,” said Vought.

The report was released as House Republicans continue to decide their leadership structure for next year. While McCarthy has been designated as the GOP’s choice for speaker, the Californian has drawn opposition from at least five members of his conference, and Vought’s group is actively whipping votes against McCarthy’s speaker bid.

Vought’s group says the GOP needs to rethink its approach to fiscal fights, especially as Congress weighs a year-long budget deal before January.

“It is critical that Congress not pass a lame-duck spending package that prevents a new Republican majority with hopefully a paradigm-shattering speaker from passing this budget early next year,” said Vought.

On the chopping block are Housing and Urban Development grants to groups that facilitate sex reassignment surgery, millions of dollars for critical race theory education and foreign aid.
(iStock)

Conservatives have long argued that Republicans cave too easily when it comes to spending fights instead of using the process to extract political concessions. They say Democrats have no qualms over weaponizing the budget process as evidenced by the government shutdown in late 2018 over funding for Trump’s border wall.

“Everyone says compromise is crucial in Washington. That’s fine,” said Sen. Rick Scott, R-Fla. “But it’s about time we stop compromising our principles and start making the Democrats compromise theirs.”

While conservatives have criticized mainstream Republicans for caving too easily, populists say the GOP’s focus on overhauling entitlement programs like Social Security and Medicare is politically problematic. Vought’s group says Republicans should move past that idea and focus on cutting spending in other areas.

“When families decide to get on a budget, they do not target the largest and immovable items of their spending, like their mortgage, first,” said Vought. “They aim to restrain discretionary spending — they eat out less, shop less and find cheaper ways of entertaining themselves.”