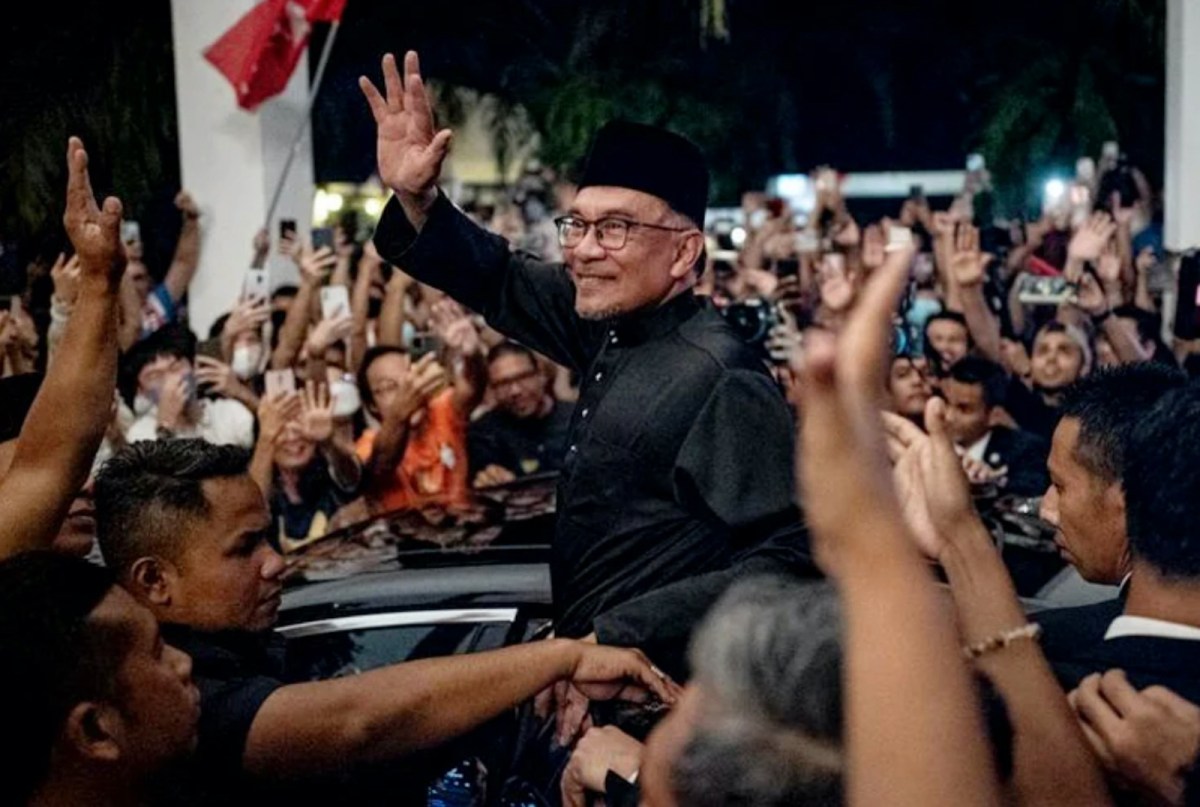 JOHOR BAHRU – Anwar Ibrahim was sworn in as Malaysia’s tenth prime minister on Thursday (November 23) after the country’s constitutional monarch appointed him to lead a historic unity government, a remarkable reversal of fortunes for a politician seen as a perennial leader-in-waiting who had repeatedly fallen short of the premiership.

After pursuing the top role for three decades and spending nine years in jail for sodomy and corruption on charges he says were politically motivated, the 75-year-old veteran opposition leader now has a chance to lead following an almost five-day political deadlock after the November 19 general election resulted in a hung parliament.

“‘Finally,’ has been everyone’s reaction. He’s been fighting for this job for a long time and people assumed that he would never make it – and now he’s the prime minister. But he’s come in through difficult circumstances and into difficult circumstances,” said Bridget Welsh, an honorary research associate at the University of Nottingham Malaysia Asia Research Institute.

Malaysia’s king, or Yang di-Pertuan Agong, played a central role in resolving the political impasse by meeting with coalition leaders and his fellow rulers, ultimately using his influence to encourage the formation of a unity government. It marked the third time the king has chosen a prime minister in just over two years, though it is the first time it has happened following an election.

Anwar’s ascent nonetheless marks Malaysia’s second peaceful transfer of power through the ballot box since 2018, realized without any party delegitimizing the results. Many observers see the dawning of a new political era, one where the dominant coalition system that has defined Malaysian politics since independence is being supplanted by a more competitive and fragmented landscape.

The Anwar-led Pakatan Harapan (PH) bloc secured 82 parliamentary seats at the polls, the most of any coalition but not enough for a simple majority of 112 to form a government. But its numbers were shored up when Barisan Nasional (BN), Malaysia’s longest-ruling coalition, and the Borneo-based Gabungan Parti Sarawak (GPS) lent their backing to a unity government.

Stability will be a key objective of the new administration given that the country has seen three relatively short-lived governments in the past four years, with the latter two ruling with razor-thin governing majorities. The three blocs hold 135 seats in the 222-seat parliament, enough to comfortably survive confidence motions and win key votes in parliament.

“Most Malaysians, especially in urban areas where the core support for PH is, will be very glad that Anwar has been appointed as prime minister,” said James Chin, professor of Asian Studies at the University of Tasmania. “Anwar is very well-known internationally as a Muslim democrat and his appointment will be widely applauded in the international arena, especially by the West.”

Analysts had not ruled out a post-election pact between long-time bitter rivals PH and BN, but it wasn’t considered a likely outcome. But markets have nonetheless reacted with optimism over Anwar’s appointment with Malaysian stocks rallying in their biggest jump in over two years and the ringgit currency reversing its decline against the US dollar.

“Not everyone is happy, understandably, because it’s a very divided electorate, but I think that we’ve got a situation where at least the two major coalitions have come together and we have a stabilizing force,” said Welsh. “The new government will have representation from at least 45% of the Malay community, from Borneo and from non-Malays. So, these are very positive dynamics.”

Speaking at his first-ever press conference as premier on Thursday evening, Anwar sought to allay misgivings among conservative Malay voters known to be skeptical of his multiracial coalition, which includes a mainly ethnic-Chinese party that opponents alleged on the hustings had “pro-Communist” leanings while claiming that PH was colluding with Jews and Christians to take over the country.

“I am firm in the efforts to raise the status of the Malay language as the national language. I understand the need to elevate the status of Islam as the official religion of the federation, the special position of Malays and bumiputera, as contained in the constitution and our system of governance that ensures the respected and sovereign status of the Malay rulers,” said Anwar.

The PH chairman added that he would forego his salary as prime minister, fulfilling a campaign promise, while vowing to fight corruption and revitalize the country’s inflation-hit economy. Anwar said that a vote of confidence to test his leadership would be the first item on his agenda when parliament sits on December 19 to quell any legitimacy questions raised by his appointment.

This comes amid a challenge from ex-premier Muhyiddin Yassin, who right up to Anwar’s swearing-in ceremony insisted that his right-wing Perikatan Nasional (PN) coalition held majority support. He had told a news conference that he had submitted 115 signed statutory declarations from lawmakers backing him as prime minister to the national palace on November 22.

At least 10 BN lawmakers had initially backed PN but are believed to have retracted their declarations, while GPS backtracked on early pledges of support for Muhyiddin by saying it would support the governing party selected by the king. PN outperformed at the polls by winning 73 seats, capturing the bulk of rural ethnic Malay areas that had traditionally been BN strongholds.

Malaysia’s new premier will immediately face political and economic challenges, starting with the unenviable task of forming a cabinet that is palatable to his coalition’s broad backers. It has been widely speculated that Mohamad Hasan, deputy president of the United Malays National Organization (UMNO), BN’s lynchpin party, could be appointed deputy prime minister.

The record 372.3 billion ringgit (US$80 billion) spending plan has not yet been passed. Tweaking the BN-authored supply bill and resubmitting it to parliament before year-end will also be atop Anwar’s agenda, along with implementing policies to contain inflation, create jobs and ensure food security as the country recovers from the Covid-19 pandemic.

Analysts say political stability will depend significantly on internal dynamics within UMNO amid calls for the resignation of BN coalition chief and party president Ahmad Zahid Hamidi, a long-time political confidante of Anwar’s whose role in brokering the unity government deal was pivotal.

“I don’t think this particular government administration will be more or less stable than the previous ones. I think there will still be a lot of intrigue and infighting and people trying to topple the government and trying to become prime minister themselves. I think that will still go on unabated,” said Oh Ei Sun, a senior fellow at the Singapore Institute of International Affairs think tank.

Zahid’s support for Anwar’s premiership also raises questions about the terms of the deal struck between the two leaders. The UMNO leader faces 47 criminal breach of trust charges over acts committed when he was deputy premier under Najib Razak, who is now serving a 12-year jail term for his involvement in the 1Malaysia Development Berhad (1MDB) financial scandal.

Some analysts believe Zahid leveraged BN’s kingmaker status to pressure Anwar into dropping charges against him and pardoning Najib, though there is no evidence to suggest that is the case.

“It is widely perceived that Anwar will ensure the corruption charges against Zahid disappear,” said Peter Mumford, a Southeast Asia analyst with the Eurasia Group consultancy, who warned that any indication of a “grubby deal” would undermine the reputation of the new government.

“One of the lessons from the first PH government is that the issue of corruption was highly politicized,” said academic Welsh. “The challenge for PH is to not act like it’s the opposition. It has to be accommodating to the different actors. And this is not about patronage. This is about handling things in a particular way that is respectful from a perspective of dynamics.”

After goading outgoing premier Ismail Sabri Yaakob into calling a snap election BN thought it could win after a string of earlier state election victories, Zahid’s political future is uncertain but looks bleak. BN, which in one form or another governed the country from 1957 until 2018, won just 30 seats in its worst-ever electoral showing under his leadership.

Francis Hutchinson, a senior fellow and coordinator of the Malaysia Studies Program at Singapore’s ISEAS-Yusof Ishak Institute, told Asia Times that it is “a virtual certainty that Zahid will be challenged” when UMNO holds party elections, which must be called within six months. The party leadership polls, expected at the end of 2022 or early 2023, could have enormous risk implications.

“BN is itself divided, with one camp in favor of cooperating with PH and another against it. The camp in favor is led by Zahid, who will most likely be challenged by someone that is PN-friendly. Should that happen and he loses, the new party leader will be able to bring the whole stable of MPs with him to form part of another coalition. So, the fledgling government could come down,” he said.

Mumford said Zahid’s decision to align with Anwar has angered some of his BN colleagues. “Most BN MPs dislike Anwar and would rather work with PN,” said the analyst. “If Zahid loses to someone – such as former defense minister Hishammuddin Hussein – who favors PN, a new government is very likely to form. Alternatively, UMNO-BN, which is bitterly divided, could split.”

At his inaugural press conference, Anwar said other parties and coalitions could join the PH-led pact in the coming days and weeks, adding that he would invite PN to consider joining as well to uphold the king’s unity decree. Muhyiddin’s coalition notably rejected the monarch’s request to join a cross-coalition government because it had ruled out cooperation with PH as a matter of principle.

For Anwar’s supporters, the royally-brokered resolution to the multi-day post-election deadlock is cause to celebrate. Time and again, the politician behind Malaysia’s “reformasi” movement had been denied the premiership and seemed destined to never lead the nation after being ousted as deputy premier in 1998 and outmaneuvered as the nation’s prime minister-in-waiting in 2018.

Former premier Mahathir Mohamad, 97, who is largely seen as having thwarted Anwar’s path to the premiership on those two occasions, offered a brief congratulatory message to his former deputy on social media and wished for his success. Signaling the end of an era, Anwar’s rise as premier follows the nonagenarian politician’s stunning electoral defeat in his stronghold constituency of Langkawi.

To many Malaysians, Anwar is a champion of the pluralism, press freedom, transparency and clean government the nation has long been denied. To his critics, including some of his former political allies, Anwar has been over-occupied with capturing political power.

Now as Malaysia’s tenth premier, Anwar must convince his supporters and the wider nation that the long wait was worth it.

‘Warriors of the Future’ Has Stunning CGI, But Is Netflix’s Wannabe ‘Avatar’