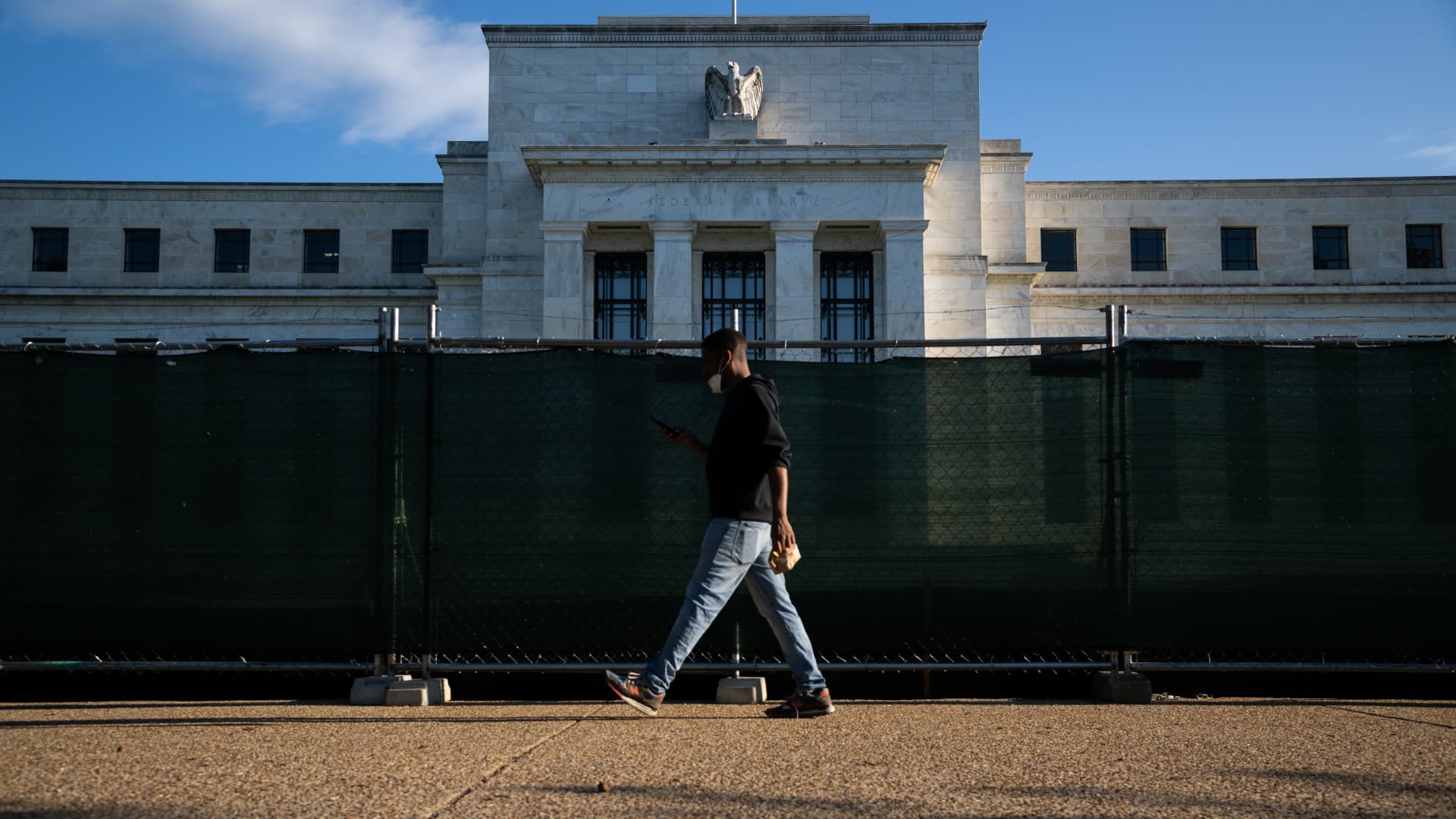 Persistently higher inflation and rapid Federal Reserve interest rate hikes are raising the risk of a crash in the bond market, according to Bank of America. Fixed income strategists at the firm on Thursday raised their outlook for the Fed’s long-term “terminal” rate, or the point where it stops hiking, to 5%, compared to the current 3%-3.25% level for the federal funds rate and above the Fed’s own 4.6% unofficial outlook. The bank says it expects the Fed to hit that level by March 2023 and for the unemployment rate to jump to 5.5% from its current 3.5%. “This is a hard landing scenario,” strategists Chris Flanagan and Joseph Leeman said in a client note. “Ultimately, it should be bullish for bonds but the path to and eventual level of peak [10-year Treasury yield] remains highly uncertain.” That path, though, will include “extremely elevated rate volatility” as well as a deterioration of market liquidity, or the ability to easily buy and sell securities in the Treasury market. Along with the Fed’s withdrawal as a buyer of Treasurys, and its current quantitative tightening program, the “risk of [a] bond market crash, which pushes [the 10-year yield] well into the 4%-5% range, is high.” The 10-year last yielded 3.89% Friday morning, suggesting that the level would run another 28.5% higher. As yields move opposite to prices, that would hammer values of Treasurys in such a scenario. The strategists note that a Bloomberg measure of bond market volatility is at its highest level since the financial crisis of 2008. That comes as the Fed, through the QT program, allows up to $95 billion a month in maturing Treasurys and mortgage-backed securities proceeds to roll off its balance sheet, adding pressure to fixed income markets. Inflation-induced ‘crash’ Bank of America points to current economic conditions as setting up badly for fixed income. “The likely trigger for such [a] crash is persistent inflation strength, with structural labor and shelter challenges, and Fed response,” the firm said. Despite the Fed raising its funds rate by 3 percentage points since March, the latest inflation news has not been good. The consumer price index rose 0.4% in September , putting the 12-month gain at 8.2%. Worse, core inflation, excluding volatile food and energy prices, rose 0.6% for the month and was up 6.6% on an annual basis, the highest level since August 1982. Flanagan and Leeman note large levels of fiscal and monetary policy in response to the pandemic, and the Fed’s sluggish reaction, as part of the inflation problem. However, they said, “Broader structural forces, not the Fed’s making, likely are also at play and adding to the persistence.” They include demographic shifts in the jobs market that have resulted in a smaller labor force that is not meeting the demand for employment , and thus pushing up wages. The second factor is a housing market where demand for rental space is high while supply is historically low, driving up rents. “There is little doubt the Fed should have started tightening sooner than it did. However, broader secular forces, not the Fed’s making and potentially accelerated by Covid, likely are also at play and perhaps adding to the persistence,” the note said. All of that does not bode well for Fed policy, which in turn will cause problems in the bond market, the bank said. The Fed has instituted a series of rate hikes to control inflation, to little effect so far. Markets expect a fourth consecutive 0.75 percentage point increase in November and another in December. The BofA strategists expect “a chaotic move significantly higher, in a bond market crash context.” “The time to take advantage of this year’s bond rout will eventually come,” they wrote. “We wait for Fed pivot to turn constructive on duration and credit — could still be either months away or at lower bond prices, or both.” However, they said the Fed “will need much greater deterioration before stepping in to support the market.” In that climate, the bank is favoring “super-short duration” and “high credit quality,” citing the six-month Treasury bill, currently yielding 4.28%, as an example.