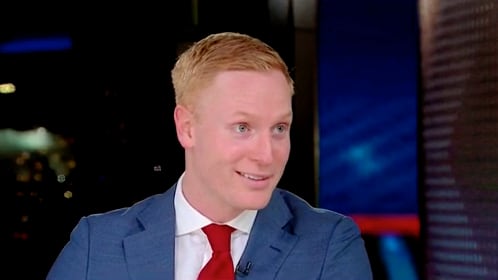 Ellis talked about his appearance on Jesse Watters Primetime the night prior, according to audio first published by Mediaite, which noted that the clip was posted online by Barstool as part of an “editing error” and removed soon after.

Ellis told co-host Adam Ferrone that he felt “disappointed” in his appearance on Watters’ show, and then recalled a discussion with his wife about it.

“She was like, ‘Let’s be honest, like, do you want to be working with these fucking people?’” Ellis said. “She was like, ‘I watched the rest of his show — he’s a fucking joke.’”

Ellis then brought up Tucker Carlson, who periodically interviews Barstool founder Dave Portnoy on his 8 p.m. show, having done so as recently as two weeks ago.

“And then like, Tucker comes on and just screams,” Ellis said. “It’s so weird.” After some back-and-forth with others in the room, he added: “They’re just trafficking in hate.”

Ellis also said he regretted some of his comments on Watters’ show.

“I think last night I went into a place that I shouldn’t have gone to,” admitted Ellis, who was fired from Barstool in 2019 after slut-shaming a college student who was murdered. “Because last night I was like, ‘Yes, the Democrats are like eating children beneath pizza shops.’ There are people watching that who don’t know that I’m fucking with them. They’re like, ‘Finally, a young, handsome person is saying it!’”

“I’m not here to fix people,” he continued, “but I’m certainly not here to like further divide the country.”

Ellis did not return a request for comment to The Daily Beast.