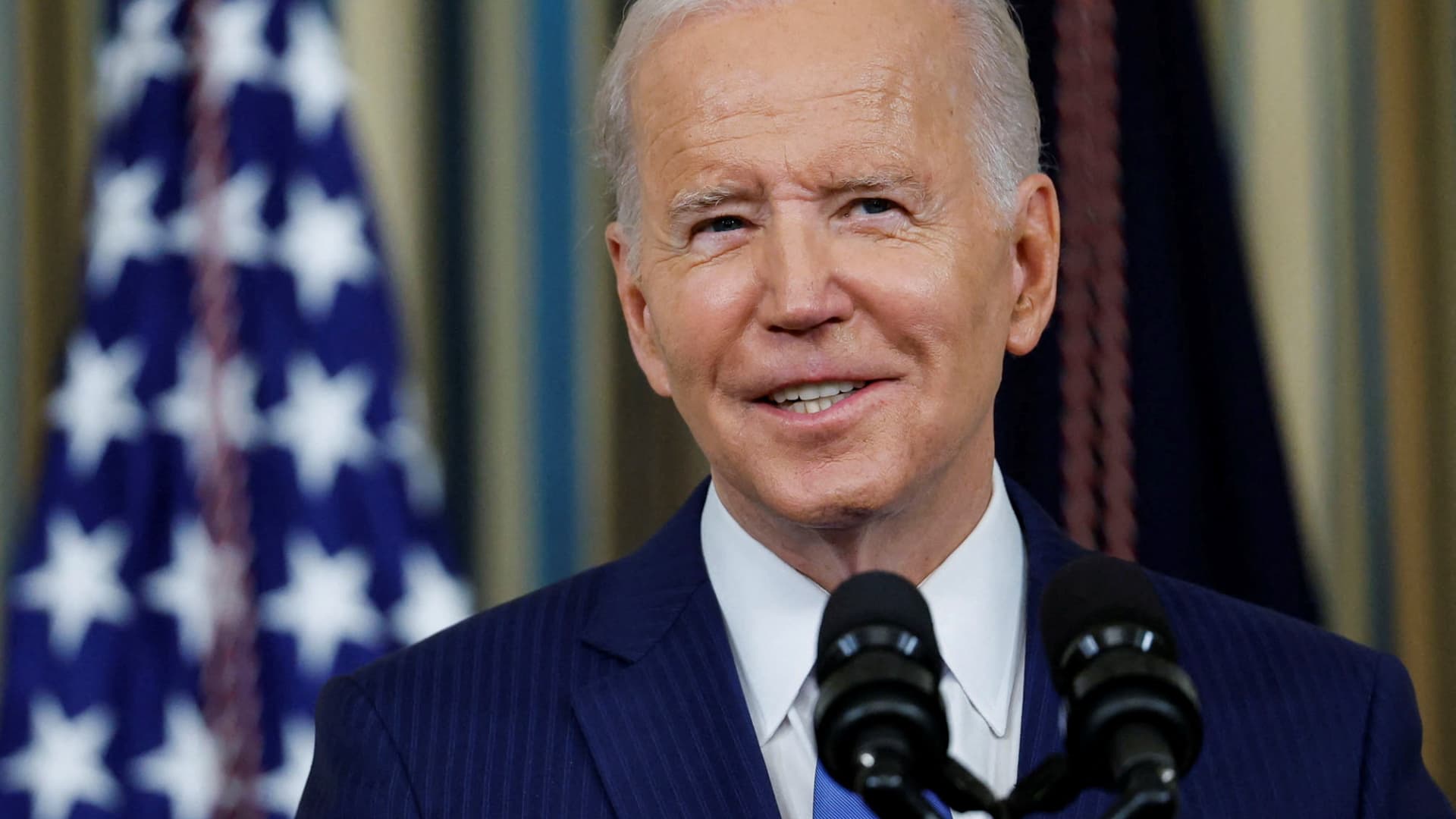 U.S. President Joe Biden discusses the 2022 U.S. midterm election results during a news conference in the State Dining Room at the White House in Washington, November 9, 2022.

Speaking in Sharm El-Sheikh, Egypt, Biden said that the energy market volatility and inflationary pressures resulting from the Kremlin’s invasion underline the need for countries to transition away from fossil fuels, adding no country can “use energy as a weapon and hold the global economy hostage.”

“It’s more urgent than ever that we double down on our climate commitments. Russia’s war only enhances the urgency of the need to transition the world off this dependency on fossil fuels,” Biden said, reiterating similar comments by world leaders earlier in the week.

The president also used the address to outline how the U.S. aims to meet the climate crisis with “urgency and determination,” announcing a series of funding packages to support emerging nations.

Those measures include a $500 million fund — formed in collaboration with the European Union and Germany — to facilitate Egypt’s transition to clean energy, and more than $150 million in initiatives that aid “preparedness and adaptation efforts” across Africa.

“Today, as a down payment, we’re announcing more than $150 million in initiatives that specifically support preparedness and adaptation efforts in Africa,” Biden said. Such initiatives include broadening access to climate finance, providing disaster risk protection, strengthening food security and mobilizing the private sector, he added.

Biden also reaffirmed the U.S.’s commitment to meet its target of cutting emissions 50-52% below 2005 levels by 2030: “The United States will meet our emissions targets by 2030,” he said.

Lacking from the announcement, however, was a wider commitment to reparations for countries most affected by the effects of climate change.

Reparations, or “loss and damage” funding, is a highly contentious issue that has taken center stage at the COP27 summit this year.

The hot-button issue made history on Sunday at the opening of the COP27 climate summit after being formally adopted onto the agenda for the first time following 48 hours of talks spearheaded by Pakistan.

Pakistan’s foreign minister told CNBC Tuesday that catastrophic floods that submerged one-third of the country earlier this year reiterated the need for wealthy countries to deliver on reparations.

“This is not going to stop at Pakistan,” he warned, pointing to the uptick in climate disasters anticipated as a result of global warming. “The next country that’s affected should have something available so that they can address the loss and damage.”

A flurry of major U.N. reports published in recent weeks delivered a bleak assessment of how close the planet is to irreversible climate breakdown, warning there is “no credible pathway” in place to cap global heating at the critical temperature threshold of 1.5 degrees Celsius.

Still, just how far commitment to such reparations will go remains unclear.

So far, a handful of mostly small European countries, including Belgium, Denmark, Germany and Scotland, have committed funds. But the modest sum is well short of the hundreds of billions of dollars experts say will be needed each year by 2030 to help communities repair and rebuild when disasters hit.

Wealthy nations have long opposed the creation of a fund to address loss and damage and many policymakers fear that accepting liability could trigger a wave of lawsuits by countries on the frontlines of the climate emergency.

U.S. climate envoy John Kerry has previously indicated the U.S. would not be prepared to compensate countries for the loss and damage they’ve suffered as a result of the climate emergency. But on Wednesday he appeared to step back those comments, saying Washington would not be “obstructing” talks on loss and damage.

He also proposed that developing countries could raise finance to transition their economies to clean energy by selling carbon offsets to U.S. companies.

Carbon offsetting refers to the removal or reduction of greenhouse gases — for example by forest conservation, renewable energy farms, or other climate-friendly activities — in order to compensate for emissions made elsewhere.

The concept has made a come back at COP27 this year, however it remains controversial with critics saying it can aid greenwashing and allow companies to delay their own decarbonization efforts.