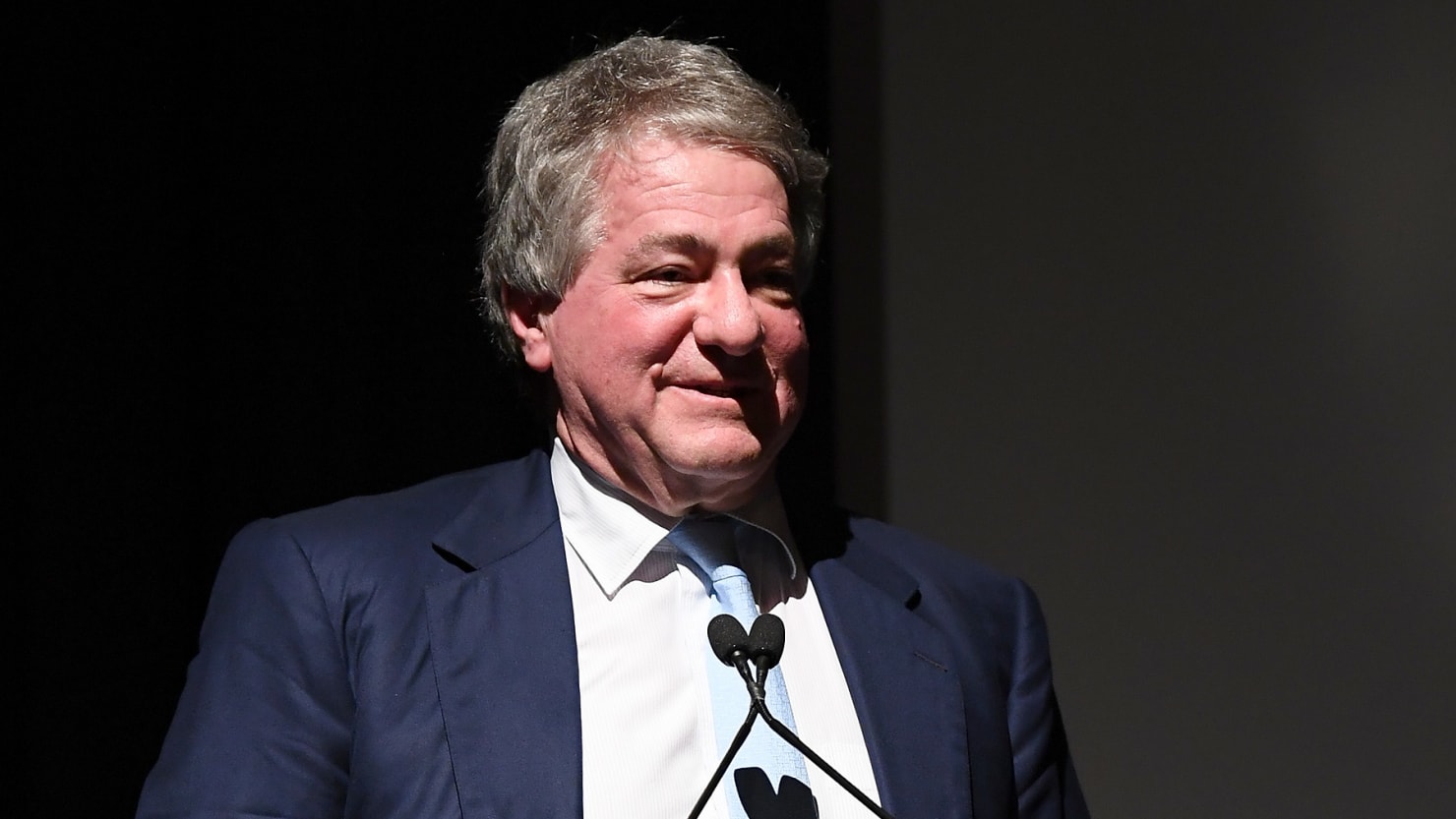 Cheri Pierson, who lived in New Jersey at the time, claims she was first introduced to Epstein by his former girlfriend, convicted sex trafficker Ghislaine Maxwell, after which she was handed off to Black.

Pierson, who now resides in Virginia, came forward for the first time in a lawsuit filed Monday in Manhattan Supreme Court against Black and the late Epstein’s estate, accusing the Apollo Global Management founder of overpowering her while she gave him a massage in early 2002.

Pierson went to Epstein’s Upper East Side townhouse to meet an investor who could help finance the launch of a skincare product she was developing, her lawsuit claims. But the rendezvous ended in violence, according to Pierson, who says in Monday’s filing that she had been “in desperate need of money” at the time.

Unlike many of Epstein’s victims, Pierson, whose lawyer told The Daily Beast she does not wish to share her age publicly, was an adult when the alleged rape occurred. However, she “looked much younger than her age,” the lawsuit notes.

The suit is the latest legal action related to Epstein following his death in July 2019. Last week, two victims of Epstein’s sex ring filed lawsuits against Deutsche Bank and JPMorgan, accusing the investment banks of enabling and profiting off his “commercial sex trafficking enterprise.”

Black, who has a net worth of about $10 billion, was friends with Epstein from the mid-1990s through 2018. An internal Apollo investigation revealed that Black paid Epstein at least $158 million from 2012 to 2017—after Epstein had served jail time in Florida for soliciting underage girls—for estate and tax planning advice.

Pierson’s lawsuit alludes to this chummy relationship. “As Black knows, from as early as 2008 and continuing through the present, Epstein purposefully introduced Black to certain women with whom Epstein had had ongoing sexual relationships with while these women were underage,” the filing states. “When they were no longer attractive to Epstein because his preference was for pubescent girls, Epstein simply passed some of these women on to Black, and likely to other men. Black, thereafter, became involved sexually with these women, at least several of whom had been with Epstein for years while underage.”

“There can be no doubt that Black knew about their prior involvements with Epstein, indeed, that is how they were introduced to Black,” the lawsuit continues. “Several of these women, whose identities are known but are being protected for their privacy herein, were sexually involved with Black for more than a decade, including through the present.”

In a statement provided to The Daily Beast, Pierson’s lawyer Jeanne Christensen said, “Thanks to the passage of the Adult Survivor’s Act, survivors of sexual violence like our client Ms. Pierson can seek the justice they deserve no matter how many years ago their trauma was suffered. We look forward to holding Black and Epstein’s estate accountable for their appalling unlawful conduct as alleged in the complaint by our client.”

Christensen, a partner at Wigdor LLP, also represents Guzel Ganieva, another woman who is suing Black for defamation and who has accused him of rape. Ganieva’s court battle with Black is ongoing, and the billionaire has argued Ganieva’s claims are part of an elaborate “extortion” scheme. Black recently filed a suit against Ganieva, claiming she was a Russian spy and that her legal team was plotting to “harm and humiliate him.”

Pierson’s allegations against Black were mentioned briefly in court filings related to Ganieva’s defamation suit, but she was only identified under the pseudonym “Jane Doe.” On Monday, Christensen told The Daily Beast that “it was a very big decision for [Pierson] to use her name” in her lawsuit.

According to Pierson’s suit, Epstein invited Pierson to meet Black at Epstein’s townhouse and also provide his guest with a massage, but didn’t disclose the private equity mogul’s name.

During the session, Black, who allegedly left his socks on, “insisted that he wanted to orally copulate Ms. Pierson and pressured her to get on the massage table,” her lawsuit states. “As she stood there panicked not knowing what to do, Black used his massive body (6’4” and 300 pounds), and his superior strength to overwhelm, take by surprise and force Ms. Pierson into a position where she was rendered physically helpless.”

Pierson’s suit says Black “used the edge of the massage table as a fulcrum to leverage his physical power and to disable” her, flipping her “upside down like a rag doll.”

“She recalls Black making vulgar and disgusting comments but her immediate fear was smashing the top of her skull into the hard floor if Black wanted to,” it goes on.

The blood rushed to her head, and Pierson “felt like she could not breathe, was dizzy and may have temporarily lost consciousness,” according to the lawsuit, which says Pierson remembers “desperately yelling and screaming—but is unsure what words came out in her upside-down state.”

Pierson says in the filing that she tried to break free from Black’s “vicious grip,” but couldn’t.

“Unquestionably, he knew she did not consent,” the filing states.

“At 125 pounds and 5 feet 8 inches and in his total physical control, Ms. Pierson had no ability to escape the physical power of Black’s massive body,” it continues. “When Black then placed his mouth on her vagina and began biting her, Ms. Pierson experienced excruciating pain. With the top of her head precariously inches above the ground and her legs bound to his shoulders, she could only see the lower wall closest to her. She had no idea what exactly he was doing to her to cause the tearing pain she felt or what acts he engaged in specifically during the violence. Ms. Pierson was in agony and had never experienced anything like that before.”

It was only after Black got dressed and left Epstein’s home that he introduced himself to Pierson, she alleges.

“I am Black,” he said, “Black, my name is Leo [sic] Black,” before driving away in a chauffeured Town Car, according to the suit.

Pierson, who had no medical insurance at the time, says she was left with a “vagina [that] was grossly swollen, torn and bleeding.” She says in her lawsuit that she used non-prescription products to “help with the pain and to help prevent infection from the cuts and tears,” adding, “For several weeks, it was painful and difficult to urinate.”

Pierson later confided in a friend about what had happened but the friend “reacted poorly” and told Pierson that no one would believe her, the lawsuit states

“From then on, Ms. Pierson decided she would not tell her story,” it says.

Epstein then gave Pierson’s phone number to Black, who soon began hounding Pierson to see him again, according to the lawsuit. He finally convinced her to have dinner at the St. Regis hotel, where Black handed Pierson $5,000 in $100 bills to help with her credit card debt, she claims. However, Pierson says she rebuffed Black and never willingly saw him again.

Pierson is asking for a jury trial and an unspecified sum for damages, full payment of her legal fees, and a restraining order prohibiting Black from “engaging in any such further unlawful conduct.”

Court filings in Ganieva’s case reveal that Ganieva and Doe reported their sexual violence claims to the Manhattan District Attorney’s Office. Since then, however, the DA’s office hasn’t pursued charges.

On Monday, Black’s attorney Susan Estrich called Pierson’s claims “categorically false and part of a scheme to extort money from Mr. Black by threatening to destroy his reputation” and alluded to the latest salvo in Black’s tangle with Ganieva’s lawyers.

“This campaign began nearly 18 months ago when Wigdor client Guzel Ganieva filed three separate complaints asserting false and defamatory claims against Mr. Black,” Estrich said in a statement. “These claims were completely contradicted by objective, contemporaneous evidence, resulting in Wigdor filing (and then discarding) phony legal theories not once, not twice, but three times.”

“Having been caught red-handed, Wigdor now resurrects false allegations concerning a second woman involving events that supposedly occurred more than two decades ago,” Estrich continued. “This serial abuse of the judicial process cannot stand. We intend to defeat these baseless claims, and to pursue all of our remedies to hold the Wigdor firm legally accountable for their abusive conduct and misuse of the courts.”