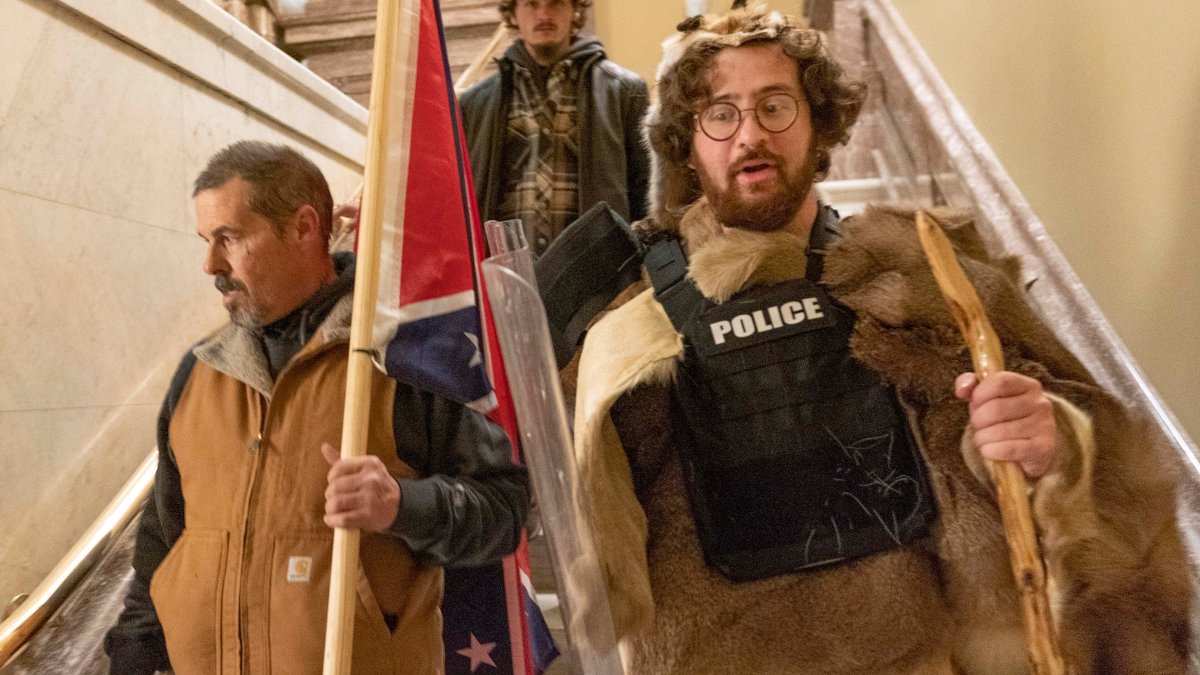 The son of a New York City judge who referred to himself as a “caveman” eager to protest Donald Trump’s presidential election loss and pleaded guilty to charges he stormed the U.S. Capitol during the Jan. 6, 2021 insurrection, was sentenced Friday to eight months in prison, according to federal prosecutors.

Aaron Mostofsky was seen inside the Capitol wearing a fur costume and a police bulletproof vest that he was accused of stealing during the mayhem. He also gave a video interview inside the building, telling the New York Post he was there “to express my opinion as a free American that this election was stolen.”

Mostofsky, 35, pleaded guilty in February to charges of civil disorder, theft of government property and entering and remaining in a restricted building or grounds.

Federal sentencing guidelines in his case recommended a prison sentence ranging from 10 months to 16 months. Prosecutors recommended a sentence of 15 months in prison followed by three years of supervised release.

Ultimately, he was sentenced to eight months in jail, followed by 12 months supervised release and 200 hours of community service, U.S. Attorney’s Office of the District of Columbia. Mostofsky also agreed to pay $2,000 restitution.

Mostofsky’s father is Steven Mostofsky, a state court judge in Brooklyn. A message seeking comment was left with a court spokesperson.

Aaron Mostofsky’s unusual garb made him stand out from the crowd of camouflage-wearing, flag-waving rioters. At one point, he was photographed sitting on a bench near the Senate chamber holding a stick and the riot shield, which he said he picked up off the floor.

According to prosecutors, Mostofsky took a bus from New York to Washington and joined protesters in overwhelming a police line and storming the Capitol. Along the way, he picked up and put on the bullet proof vest, valued at $1,905, and the riot shield, worth $265, prosecutors said.

Before the protest, Mostofsky messaged another demonstrator that he could be found at the protest by looking for “a caveman,” adding, “Even a caveman knows it was stolen,” prosecutors said. Afterward, as his photo circulated, he said the image was unfortunate because “now people actually know me.”

U.S. District Judge James Boasberg told Aaron Mostofsky Friday that he was “literally on the front lines” of the mob’s attack on Jan. 6, 2021.

“What you and others did on that day imposed an indelible stain on how our nation is perceived, both at home and abroad, and that can’t be undone,” the judge told Mostofsky, 35.

Mostofsky had asked the judge for mercy, saying he was ashamed of his “contribution to the chaos of that day.”

“I feel sorry for the officers that had to deal with that chaos,” said Mostofsky, who must report to prison on or after June 5.

Nearly 800 people have been charged with federal crimes related to the Capitol riot in the 15 months following the shocking event, according to federal prosecutors. More than 250 individuals were charged with assaulting or impending law enforcement. More than 200 of them have pleaded guilty, mostly to misdemeanors punishable by a maximum of six months imprisonment.