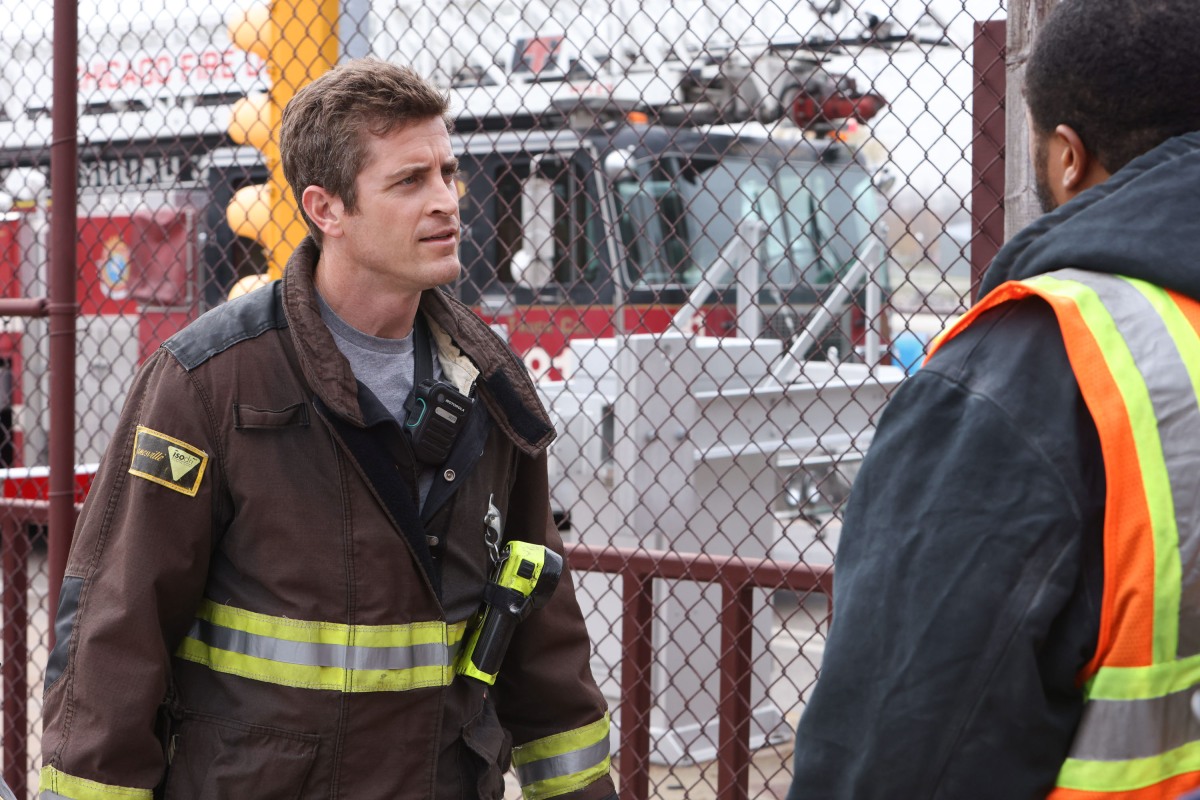 Chicago Fire Season 11 episode 9 is here after a long break. The Chicago Fire fall finale was action-packed and had a major cliffhanger at the end. Here’s a look at what happened with Severide, Stella, Herrmann, and the rest of the crew.

Chicago Fire Season 11 Episode 9 (titled “Nemesis”) opens with Stella Kidd (played by Miranda Rae Mayo) lying in bed. She reaches over for Severide (played by Taylor Kinney) but realizes he isn’t next to her. When Kidd looks at the alarm clock, she sees it’s almost 4 o’clock in the morning. Severide can’t sleep because he’s troubled by the Martucci case.

Pryma wants Severide to help him, but that would mean putting Cavanaugh, a “dirty cop,” back on the streets. Although Severide told Pryma he wouldn’t help, he’s having second thoughts. Severide decides to talk to Cavanaugh in jail. However, after speaking with him, he decides it was a mistake and he doesn’t want to get involved.

Gallo makes a confession to Herrmann

RELATED: ‘Chicago Fire’: Severide and Kidd Investigate a Suspicious Fire and Carver Is a Mystery

Herrmann lets Gallo know that his niece, Tracy, is going back home, and he thanks Gallo for being such a great guy. What Herrmann doesn’t know is that Gallo and Tracy had a fling. He feels guilty about it, but Ritter and Violet tell him not to say anything.

Gallo decides to ignore their advice, and he tells Herrmann about his relationship with Tracy. Gallo finally confesses he and Tracy slept together. He waited until Joe’s adoption hearing because he knew Herrmann would be in a good mood. However, it didn’t look like Herrmann took the news well.

Sylvie Brett is back in the dating game. She told Violet that she’s planning to attend a concert with Dylan. This is a big step for her since she and Matt ended their relationship not that long ago. Sylvie says they’re taking things slow, and a concert date is the perfect activity. Only time will tell if this relationship is going anywhere.

Carver gets in trouble

Carver (played by Jake Lockett), Stella, and Severide answered a call where a motorcyclist was hanging from a bridge. Carver ran into an issue where the worker operating the bridge wouldn’t cooperate. Time was running short, so Carver went into the control room and operated the bridge.

Unfortunately, a complaint was lodged against Carver and the team. The control room operator said Carver put his hands on him (Carver pushed him out of the way). Severide came to Carver’s defense, telling Boden, “If Carver hadn’t done it, you all would be having this meeting without me.”

Boden told the group he couldn’t do much because internal affairs would be stopping by to take a statement. Stella was surprised by how quickly the complaint was escalated, but Boden told her it’s because the complaint came from a city employee.

Unfortunately, the person investigating Carver was a familiar face. When the camera follows Carver into the room, we see that Emma Jacobs is the investigator. This can’t be good. Emma is the person who tried to get Violet fired. Emma asked Carver irrelevant questions like how he got his job and if he thought there were cliques at Firehouse 51. He looked confused and very worried.

“I just don’t get how someone could flame out as badly as her and still end up in IAD,” says Gallo. Stella explained to Carver that Emma tried to blackmail Hawkins and get Violet fired. Everyone is amazed that she was transferred to the internal affairs department.

Carver is worried about how everything will turn out for him. Later, he’s at Molly’s, trying to drink his worries away. He comes over to Stella and thanks her for her support. He feels like his days at 51 are numbered. However, everything turned out OK.

Later in the episode, Emma runs into Violet. She tells her that Carver is in the clear. Violet gets upset and tells Emma she knows who she really is. Emma snaps back and says, “It’s not the worst thing to have a friend in IAD. You never know when it might come in handy.” It seemed like Emma was making a veiled threat.

The Firehouse 51 team is in trouble

Later, the firehouse is called to the scene of a barricaded suspect. They learn it’s Martucci, the man Pryma was trying to take down. Gunfire breaks out. Things get quiet, and then a member of the SWAT team comes out and says Pryma is injured. A rocket-propelled grenade is stuck in Pryma’s leg. Stella, Carver, and Mouch go in and try to help him. They manage to remove the grenade, but all of a sudden there’s an explosion. It’s not clear if anyone was injured—or worse.