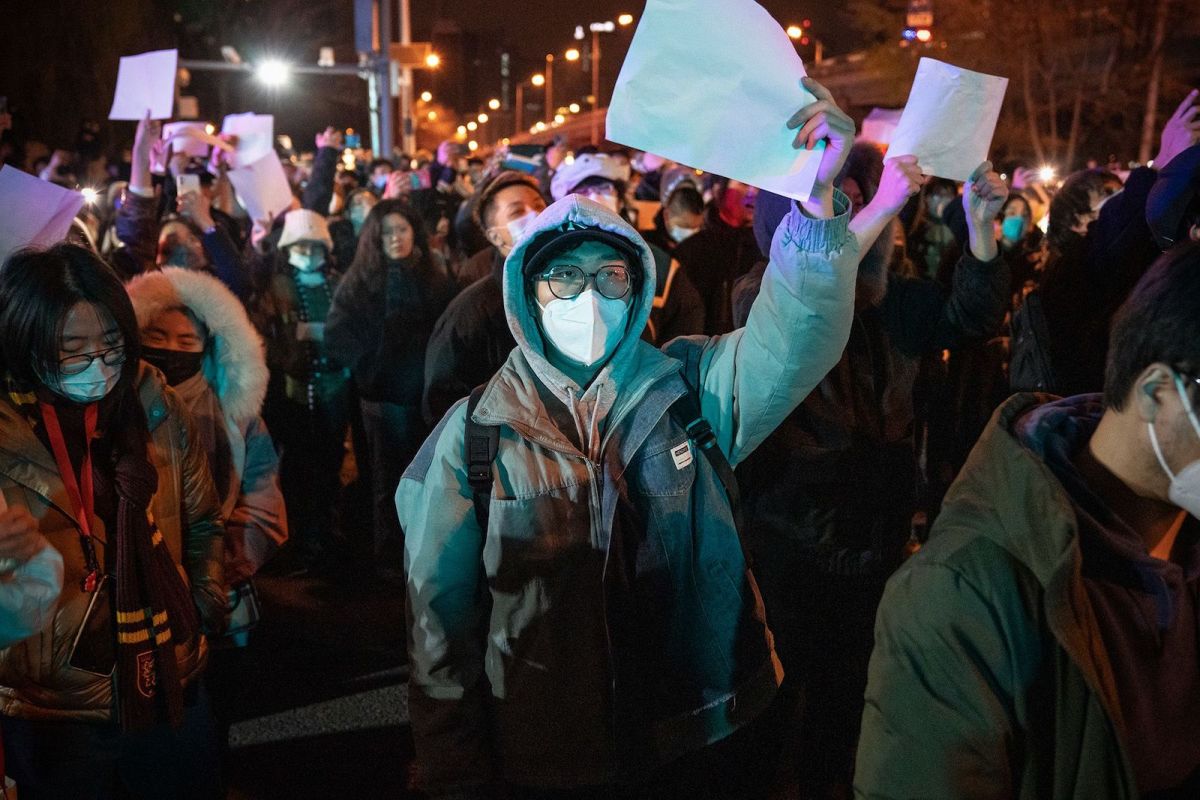 If Chinese leader Xi Jinping has a clear plan to end a major Covid crisis without precedent, now would be a great moment to share it with the global investors exiting Asia’s biggest economy.

Xi may indeed have one. Reports are that the government’s Covid-19 task force is telling local officials not to overdo lockdown measures fueling China’s worst protests since Tiananmen Square in 1989.

Video footage of social unrest in cities like Shanghai, Guangzhou, Chengdu and Wuhan, and scattered calls for Xi to step down, are spooking global markets.

China’s apparent “zero-Covid” climbdown has momentarily cheered global investors. But will Xi continue to pivot away from what is arguably the biggest blunder of his 10 years in power?

The official manufacturing purchasing managers index slid to a worse-than-expected 48. China’s services index fell to 46.7 from 48.7 in October. Like a growing number of indicators, both are below the 50-point mark that separates expansion from contraction.

Jonathan Fortun, an economist at the Institute of International Finance, adds that in October China’s equity outflows were “particularly pronounced” at US$8 billion.

“The failure of Covid zero” is “likely to have major implications for China and the rest of the world,” says Olivier Blanchard at the Peterson Institute for International Economics, a Washington-based think tank.

Given the rally in mainland stocks after Xi’s apparent pivot, the Communist Party knows precisely what global investors want to hear from China’s government: a decisive end to the zero-Covid era.

One promising sign: Xi signaled that Beijing is ramping up its vaccination program targeting the elderly. Health experts have long argued that doing so — and welcoming more effective mRNA vaccines from the West — is crucial to China putting the pandemic in the rearview mirror.

The conciliatory tone from health authorities in recent days is also being interpreted by market watchers as progress. Abrupt moves to lift Covid restrictions in economically vital cities like Guangzhou and Chongqing could signal a top-down policy change.

“This should bolster industrial production, consumer spending and investment in the second half of 2023, which in turn should support Chinese asset prices,” says analyst Zerlina Zeng at advisory CreditSights.

But big questions remain. “This will likely accelerate reopening” even though “there will be no official end to zero-Covid,” says Brendan Ahern, chief investment officer at Krane Funds Advisors.

The best guess of economists at Deutsche Bank is that China won’t reopen until late spring 2023. “Until then, we see China’s growth stagnating,” they say.

“China’s leadership now faces a choice between two bad options,” he says. “The first is to double down on zero-Covid, which would require an escalation of both lockdowns and political repression.

“Even then, this option might still fail to suppress the current wave of infections, given the transmissibility of the latest variants. The alternative is to let go of the rope.”

Others are less concerned. Qi Wang, CEO of MegaTrust Investment, says “I suggest not over-extrapolating. Just wait and see. I won’t be surprised if these demonstrations are sorted out quickly in the next few weeks. There are tens of thousands of protests like these in China each year. Most if not all are resolved eventually.”

Wang says the important thing is that “China continues to improve its anti-virus controls, taking consideration of not only the social and economic impact but also the public opinion.”

Odds are “the protests gradually become non-events and die out, as the government takes steps to address the social issues. This would be similar to the mortgage boycotts earlier this year, which started with a lot of noise and eventually went away.”

The problem, of course, is that global investors still can’t be sure where China’s Covid policy might be in three to six months. Surging public anger prodded China to speed up the schedule for a shift of Covid focus to treatment rather than prevention, Asia Times reported November 29, citing sources close to the State Council’s leadership.

For many global investors and multinationals, this is, at best, a trust-but-verify moment. As Xi mulls reopening in, say, early 2023 or in the spring, suppliers in China serving Apple, Google and other top brands are girding for accelerated business losses to India, Indonesia, the Philippines and Vietnam.

The message from massive market rallies earlier this week is that engineering a rebound in growth — and restoring confidence among overseas investors — could happen remarkably quickly.

These now periodic will-Xi-or-won’t-he zero-Covid episodes leave Beijing with a serious trust problem — both at home and abroad.

The scale of social unrest speaks to the magnitude of Xi’s miscalculation. Yet, this is the second time in as many years that Xi hobbled the economy for reasons that remain evident only to his closest confidants.

The first was the sudden crackdown on Big Tech in November 2020. That episode saw Jack Ma, the overseas face of China Inc, sidelined in epic fashion. An initial public offering by Ma’s fintech phenomenon Ant Group, which was to be the biggest in global history, was scrapped.

Chinese stocks lost trillions as regulators next went after Alibaba, Baidu, Didi, JD.com, Tencent and others. Ant’s expected $37 billion IPO is nowhere near to being rescheduled to announce China’s arrival as a global tech power. Ma is now reportedly cooling his heels in Tokyo.

Two years later, Xi is effectively keeping China under a quarantine dragnet, and indefinitely so. Things are at a point where Beijing’s censors are editing out World Cup audiences in Qatar so the Chinese won’t see the unmasked masses.

Theories as to why draconian Covid curbs remain are many, including that Xi does not want to admit a mammoth policy blunder or somehow still holds out hope that Chinese scientists have a game-changing vaccine in the works, despite the clear failure of homemade Sinovac against evolved Covid strains.

What worries many economists, though, is that once Xi’s government does conclusively close the door on the zero-Covid era, it might be too late.

The timing of Jiang Zemin’s death on Wednesday seems its own wild card. President from 1993-2003, he led China’s post-Tiananmen economic boom. Jiang eased up on censorship, even holding a live press conference in Beijing in 1997 with then-US president Bill Clinton. He also set the stage for the rapid development of the private sector that Xi is now sidelining.

The contrast could be an unflattering one as a fresh wave of protests sweep the country. And it leaves Xi’s party with a prickly question: how to mourn a leader many view as a champion of the reform, modernization and openness protesters crave?

Economist Alicia Garcia-Herrero at Natixis says it is still hard to assess the Covid policy fallout for investment. She observes, too, that fiscal and monetary stimulus “are much more constrained than in 2008” even as local governments are “experiencing a collapse in land sales” amid a huge jump in Covid-related expenditures even as gross domestic product (GDP) slows.

Garcia-Herrero finds it ominous, too, that Beijing officials are suggesting “foreign forces” and “hostile forces” are stoking the protests. If the unrest leads “to a harsher regime” going forward, she says, foreign investors could turn even more negative as Xi begins his third five-year term.

Analyst Craig Erlam at OANDA adds that “we shouldn’t kid ourselves. In the event that China commits 100% to its vaccine drive, especially among the elderly and vulnerable, the move away from zero-Covid will take time as the virus spreads rapidly throughout the country necessitating swift action to control the spread. Even the best-case scenario is one of significant turbulence for the second-largest economy next year.”

Economist Larry Hu at Macquarie Group thinks the PBOC will probably increase its use of so-called “window guidance” to prod lenders to support property developers. That, Hu says, might be an effective way to respond to intensifying headwinds bearing down on the economy.

Should Xi genuinely exit his zero-Covid strategy and reopen the country, the People’s Bank of China could quickly scale back stimulus. The policy will likely remain loose in the current transition period, until the Covid policy shifts and the economy recovers, says economist Ding Shuang at Standard Chartered Plc.

The bottom line, says MegaTrust’s Wang, is that “as a stock investor, I don’t have a lot of things to say on the politics. The protests highlight the urgency for China to further refine the zero-Covid policy, in a race against time. Time is running out for saving the economy. Time is also running out with people’s patience.”