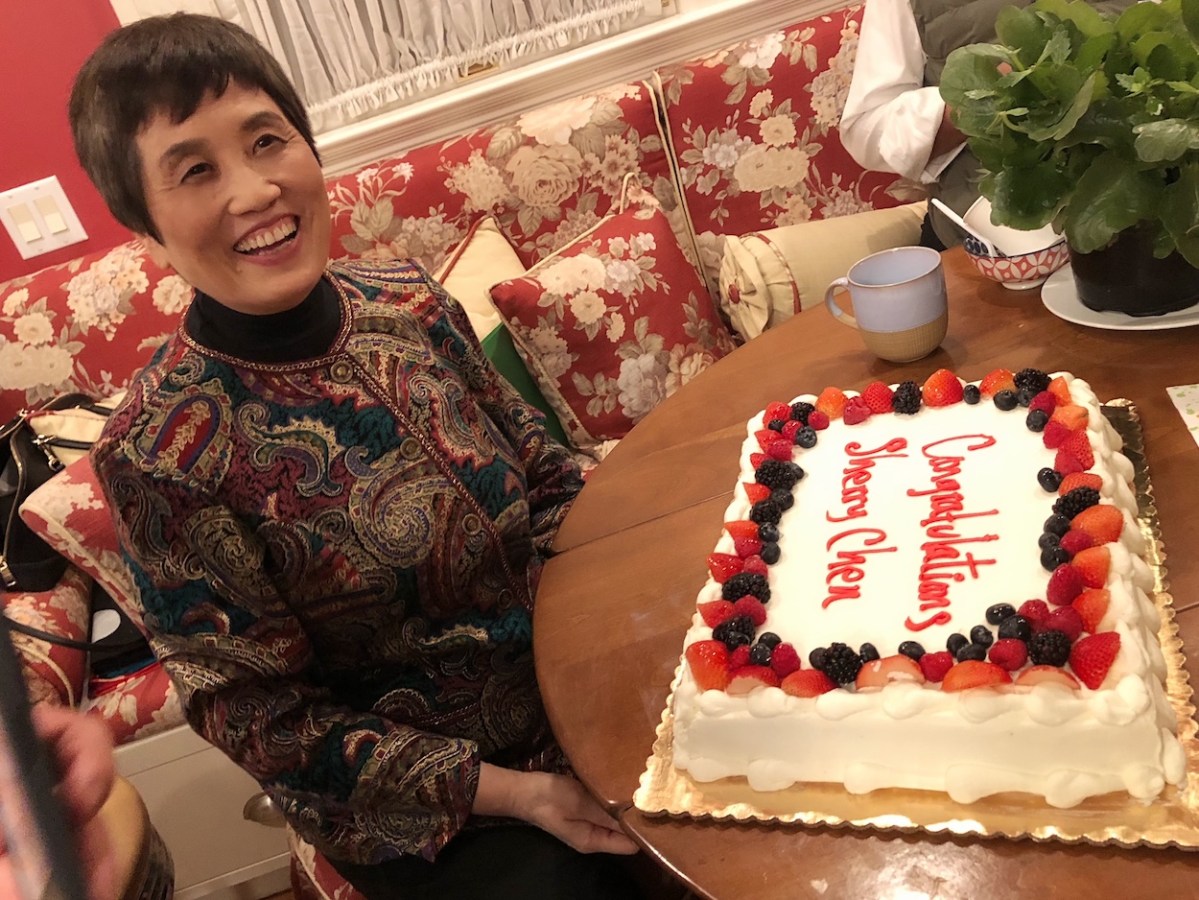 Sherry Chen threw a party last weekend to celebrate her legal victory over her former employer, the US Department of Commerce (DOC). The purpose of the party, Chen said, was to thank her many loyal supporters for standing with her throughout her “long journey seeking justice.”

The celebration took place at a home in Palo Alto, California, belonging to Adrian and Monica Yeung Arima, where Chen was staying as their houseguest. Silicon Valley was where many of her supporters reside who donated to her legal defense fund and gave abiding moral support. Around a hundred attended the party.

In October 2014, after a two-year investigation, the Federal Bureau of Investigation came to her workplace and took her away in handcuffs, to the shock and surprise of her colleagues. In March 2015, federal prosecutors dropped all charges without any explanation. That should have been the end of the Sherry Chen story, but it wasn’t.

Amazingly, in March 2016, Chen, a hydrologist, was fired from her job with the National Weather Service (NWS) based on the same charges that had been discarded by the prosecutors. NWS is under the National Oceanic and Atmospheric Administration (NOAA).

Asia Times described the twisted shenanigan that took place between the NWS and NOAA in order to formalize the paperwork for Chen’s dismissal – hint, the head of NWS wriggled and managed to stay out of the fray.

Shocked by the development, she said to Asia Times, “Why do I have to accept the unfair and unjust treatment my government has given me? I am not just fighting for myself but for all victims of racial profiling so that it won’t happen again.”

MSPB rules in her favor

Chen then filed a complaint for wrongful termination with the Merit System Protection Board. The MSPB was established to protect federal workers against abuses by their employers. To the surprise of many, the chief administrative judge, Michele Schroeder, ruled in her favor as the victim of gross injustice.

From the time she filed with the MSPB to reaching the verdict took one and a half years. Judge Schroeder order reinstatement with back pay and benefits. Historically, the odds of winning a ruling from the MSPB against the federal government had been less than one in a hundred. So, in April 2018, the verdict should have been the end of Chen’s journey and a cause for celebration.

But it wasn’t, because the DOC filed an appeal, which needed to be heard by a quorum of two or more judges. At the time the MSPB had only one working judge, and therefore the appeal was sent into limbo. Was the DOC aware of the delay due to a technicality? Of course.

On January 2019, Chen filed a civil lawsuit against the DOC alleging malicious prosecution and false arrest and sought $5 million for damages and compensation. In October 2021, the American Civil Liberties Union along with Cooley LLP, a major law firm headquartered in Palo Alto, joined her legal team in pursuing the suit.

Finally, early this month, Chen along with ACLU announced a settlement that would pay her $550,000 and an annuity of $125,000 per year over the next 10 years. Thus she can claim a happy ending after a decade-long journey.

“It’s an enormous victory for Ms Chen personally,” said Ashley Gorski, a senior staff lawyer with the ACLU National Security Project, “and for the Chinese-American community as well. The settlement makes clear that when the government discriminates, it’s going to be held accountable.”

The ACLU called her settlement historic, unprecedented and the largest ever paid by the DOC. All true, but Chen’s win, in my view, just recovers her legal fees and back wages. And her case is just a beginning of possible rectification and does not signify the end of systemic racial profiling against Chinese-Americans by the US government.

As I observed in 2015, “Rather than compiling evidence beyond a reasonable doubt, the FBI and fellow practitioners will jump at any flimsy thread of possible wrong doing, make a public arrest, send out a press release on their accusation and put the hapless Chinese American in detention.

“When their findings are then subject to scrutiny and fail to pass muster, the charges are quietly dropped. By then, of course, the reputation of the person is in tatters and the victim’s life and finances are in ruin.”

Since the celebrated Wen Ho Lee case and even earlier, to this day, Chinese-American scientists are considered guilty until proven innocent. The burden of proof is on the accused. In Sherry Chen’s case, even when proven innocent, the burden was still on her to fight for the justice that was her due.

According to an article published last December by the MIT Technology Review, analyzing the so-called China Initiative launched by former US president Donald Trump, “To date, only about a quarter of defendants charged under the initiative have been convicted, and about half of those defendants with open charges have yet to see the inside of an American courtroom.”

The remaining 25%, I surmise, had their charges quietly dismissed.

In 2015, Xiaoxing Xi, professor of physics at Temple University in Philadelphia, Pennsylvania, was arrested at gunpoint at his home in front of his wife and daughters by the FBI in a “daring” dawn raid.

The DOJ subsequently dropped the charges, which could be considered a win for Xi because the department did not ask him to plead guilty to some minor misdemeanor in exchange. The government just hates to admit making an error, and will normally ask for a plea to some minor offense so the arrest can be scored in the win column.

Wen Ho Lee, for example, had to plead guilty to downloading computer files in violation of regulations at the Los Alamos National Laboratory before obtaining release from nine months of solitary confinement and set free by the presiding judge. The judge expressed regret that Lee had to cop a plea and apologized to him for government’s gross misconduct.

Many other Chinese-Americans victimized by the FBI and DOJ have had to plea-bargain so that they can go on with their lives and cut the financial bleeding from the legal fees. It’s always a challenge to take on the US government in a legal dispute. Compared with the individual, the government has infinite resources and time on their side.

Like Sherry Chen did, Professor Xi is also suing the US government and FBI agents for knowingly misrepresenting evidence as the basis for his arrest and the consequent trauma he suffered. The ACLU is also part of his legal team and he is hoping for an eventually favorable ruling.

Gang Chen, a professor at the Massachusetts Institute of Technology (MIT), appeared in a panel discussion along with Sherry Chen and Dr Xi at a conference in San Francisco, held a day after Chen’s legal victory was announced. The subject was racial profiling and discrimination against Chinese-American scientists.

Professor Chen was more fortunate than his fellow panelists. According to The New York Times, as soon as he found that he was under investigation, his employer, MIT, hired outside legal counsel to advise him along the way.

One early morning in January 2021, a gang of more than 10 FBI agents came to his home to handcuff him and take him away for interrogation. He was released that afternoon, but he had to stay away from the campus and make no contact with any MIT employees.

That September, Professor Chen’s lawyer reported good news from the prosecutor’s office. If Chen would admit to having certain contacts in China, the charges would be dismissed and the case dropped. While his lawyer thought the offer was a safe, risk-free deal to get off, Chen refused. Since he had done nothing wrong, he did not think he had to make the deal.

A full year later, in January 2022, all charges against Professor Chen were dropped and he resumed his work at MIT. He was more fortunate than most because Rafael Reif, then president of MIT, supported him from the inception of the government investigation and the school pick up his legal bill. His fellow faculty vigorously rallied to his defense and protested his innocence.

Others in similar debacles have been much worse off. Their university employers quickly cut them loose and hung them out to dry. By the time the charges are dropped, they may or may not be reinstated, their reputations have been tainted and their bank accounts greatly depleted by the fees for legal defense.

At least 1,400 US-based ethnic Chinese scientists switched their affiliation last year from American to Chinese institutions, according to a joint report by academics from Harvard, Princeton and MIT.

The trend is increasing thanks to the China Initiative established by Donald Trump and only recently canceled by President Joe Biden. The original intent of the initiative was to curb exchange of scientific informative between the US and China. It turned into a witch-hunt that ran amok.

For ethnic Chinese, working in science and technology in the US has become hazardous, risking out-of-the-blue arrests and third-degree grilling about one’s loyalty. The way to stop the brain drain from the US is to enact regulations and laws that will punish prosecutions based on lies, falsified evidence, and hiding exculpable evidence.

Anti-Chinese hate crimes must not be tolerated, especially when the perpetrator is the government. Provisions need to be in place for victims of wrongful prosecution to be promptly compensated for damages and legal fees. Only then can a brain drain of Chinese scientists and researchers slow – and perhaps reverse.

George Koo retired from a global advisory services firm where he advised clients on their China strategies and business operations. Educated at MIT, Stevens Institute and Santa Clara University, he is the founder and former managing director of International Strategic Alliances. He is currently a board member of Freschfield’s, a novel green building platform.