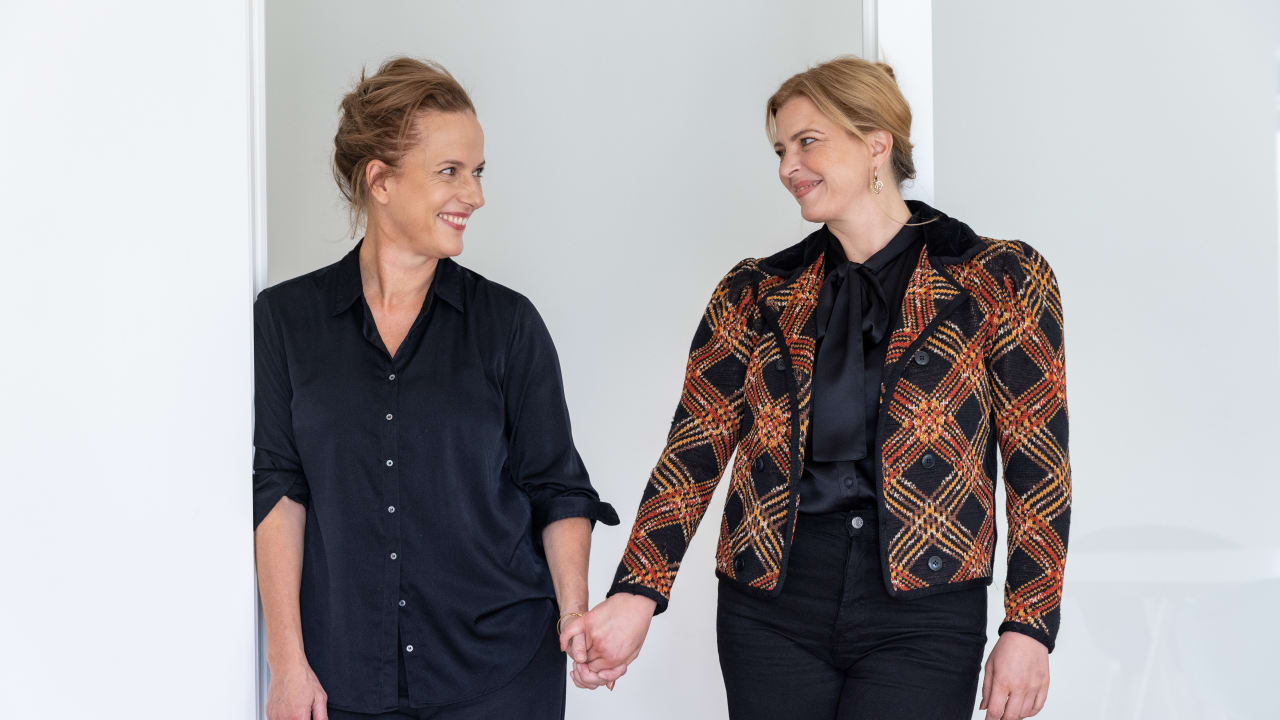 When it comes to historical films and series, no one can ignore the two: Claudia Michelsen (53, “Kudamm 56”, “Der Turm”) and Jördis Triebel (44, “Babylon Berlin”, “Weissensee”). Now the actresses have shot a joint movie.

BILD am SONNTAG: You act in the film “In a country that no longer exists” about the fashion scene in the GDR. How important was fashion to you back then?

Claudia Michelsen: Fashion was definitely not my focus as a young girl, that came much later.

Joerdis Triebel: Fashion didn’t have a special meaning for me either. But what makes the film so special is the view of the art scene in the GDR. I grew up in this art scene. For example, I was already together with the musicians of today’s band Rammstein when I was a small child.

Michaelsen: Although fashion was never a big issue for me, there were still a few important pieces of clothing for me – like the parka or jeans. If there ever was a pair of jeans from the west, you had them for six or seven years. The jeans then had to grow with them.

Was the GDR fashion magazine “Sibylle” at your house back then?

Michaelsen: No, at that time the “Filmspiegel” or the “Theater der Zeit” were more on the table for me. I only discovered the “Sibylle” with its great photo series much later.

Triebel: We had the “Sibylle” lying around at home and the clothes from it were tailored. My mother sewed a lot. And I learned to sew at a young age.

What came out of it?

Triebel: In the West, the Amaro backpack was fashionable at the time. The school backpack had a compartment at the front into which you could put pens like a pencil case. Unfortunately, we never had any connections with the west and that’s why I sewed this backpack myself out of white cotton. He was incredibly ugly, but I was so proud.

Michaelsen: We sewed and dyed.

Triebel: Yes, exactly. And tie-dyed. The fashion in the GDR was therefore very individual.

Michaelsen: Workwear of all kinds was “en vogue” and a hit. Butcher’s shirts, but also colored chef’s jackets went well.

Triebel: Gowns from the hospital were also in for a while. We wore them as nightgowns.

Did you have longing pieces from the West?

Michaelsen: Yes, but they weren’t necessarily clothes. The longing pieces were more like records, which were difficult to get hold of.

What kind of records were those?

Michaelsen: I was lucky as my adoptive father was a sailor and brought back the best records from his voyages. The Stones, of course Supertramp and Dire Straits. In Dresden there was no West Radio, just the “musical air freight” once a week, where everything was then recorded on cassettes.

Triebel: Did your adoptive father bring you a surprise egg?

Michaelsen: I don’t remember. Why?

Triebel: I always wanted that!

Michaelsen: For real? For me it was air chocolate! There were in the Intershop.

Triebel: I used to go there with a friend. But I was always behind the glass because I never had West money.

Michaelsen: We passed a small hotel in Dresden on the way home from school. And they had a small Intershop. Sometimes we just went in to smell the “West”.

What smelled so special?

Triebel: All the sweets there were colorful and smelled so good. I loved the barbie stuff and everything that glittered. The Intershop was like paradise for us. I always thought: This is what the West smells like!

Did you get West packages back then?

Michaelsen: Once every year or two, if I was lucky, a fragrant western package would come. We only had distant friends of my grandmother’s.

What memories do you have of the summer of 1989?

Triebel: I was present at all the demonstrations at Alexanderplatz, so that I even got reprimands from my school because I skipped.

Michaelsen: I was even supposed to speak at the really big demo at Alexanderplatz. The playwright Heiner Müller wanted that. But I was just too young and too nervous, I didn’t want to. But we were there, behind this small grandstand, yes, a historic moment.

Triebel: It was an amazing atmosphere back then! I will never forget that …

Michaelsen: It’s been like that all year. We also partially stopped doing theatre. Every day there was a meeting in the Berlin theaters. And me as a young girl right in the middle.

Triebel: And we never knew: is this going to tip over now?

Michaelsen: Is there civil war or not? Are the tanks rolling through the streets or not?

In the film, model Suzie is caught by VoPos because she had George Orwell’s book 1984 with her. Have you read banned books before?

Michaelsen: That was normal, we grew up with it.

Triebel: It was also very clear that we would not talk about it. And if so, then only with certain people.

Michaelsen: The booksellers were much sought-after bartering partners.

Did you read “Bravo” or other Western magazines back then?

Triebel: We passed the “Bravo” on secretly until it was no longer legible. “Dr. Summer” didn’t need to explain any more to us. We were very enlightened in the GDR. Nudity has never been a problem with us either.

Did you actually model in the past?

Michaelsen: no I wouldn’t have been interested in that either. But back then, in the early 90s, I actually had a shoot for “Sibylle”. The wonderful Sibylle Bergemann wanted to photograph me when I was a young actress. I’m a little proud that I was allowed to take photos with her.

Triebel: I actually really enjoy modelling. I’ve had two Vogue shoots now. To be honest, I would like to do this more often. But I don’t think I have the proportions to fit into these samples.

Michaelsen: There is no longer such a sentence, Jördis! Gone are the days… wrong and right proportions.

Triebel: I still hear that sentence!

Michaelsen: Yes, there’s still too much old stuff stuck in people’s heads. But we’re on our way.

Triebel: Okay, then the model agents are all welcome to get in touch with me. I would like to do more fashion shoots.

This article comes from BILD am SONNTAG. The ePaper of the entire issue is available here.