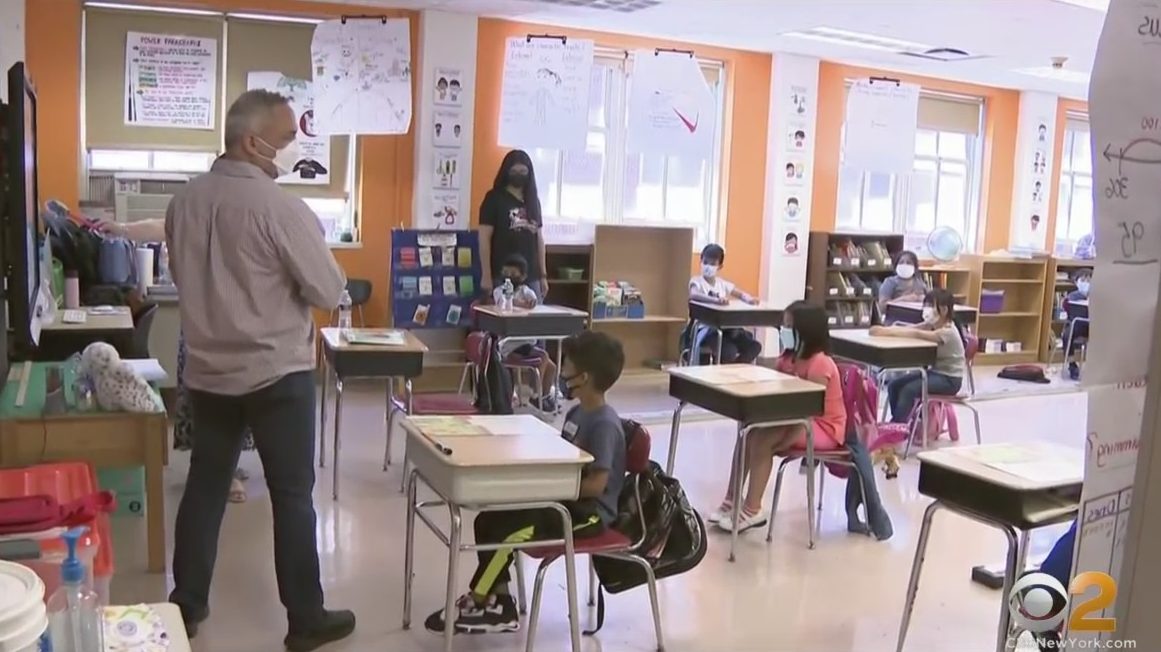 A three-judge panel lifted a temporary ban on the mandate that was originally set to take effect Monday.

The United Federation of Teachers said 3% of teachers (about 3,400) remain unvaccinated.

School workers now have until 5 p.m. Friday to get their first dose, or risk losing their jobs, de Blasio said.

“If you have not gotten that first dose by Friday 5:00, we will assume you are not coming to work on Monday, and you will not be paid starting Monday, and we will fill your role with a substitute or an alternative employee,” de Blasio said.

Not everyone thinks the court’s decision is a done deal. Lawyers representing teachers who sued to blocked the mandate said they will petition the U.S. Supreme Court.

Staten Island special education teacher Rachel Maniscalco is one of the teachers suing the Department of Education in federal court. She blasted the mayor.

“It’s almost as though the dictator is just feeling slighted and trying to do everything in his power to ruin the people who just don’t agree with him,” Maniscalco told CBS2’s Dick Brennan.

Earlier Monday, the mayor said he was confident a judge would rule in the city’s favor by the end of the week.

Some school staff held a protest in Foley Square, arguing the city should keep its current protocol for unvaccinated staff, which is to get tested weekly.

Bronx school safety officer Taisha Richards said she will not get the vaccine and is willing to lose her job, but she doesn’t want to.

“I don’t feel like your job should be at stake,” Richards told CBS2’s Lisa Rozner. “For my religious reasons, my civil rights and freedom – freedom of choice.”

The teachers union has been encouraging staff to get vaccinated.

“We’ve already had 500 schools report to us today and only, you know, only one third of the 500 said they’re ready,” Mulgrew said.

“We are not hearing instances of school with staffing we can’t address. Do they want to give up giving to kids? Paycheck? I think they’ll realize, get vaxxed, it is the right thing to do, and will get shot,” de Blasio said.

“It’s probably below two. It’s probably right below 3%. Uh, so that would be approximately 3,400, which, you know, sounds like a lot, but where we know we’re the largest school system in the country. So we have, we have a lot of teachers,” one person said.

“She like so many of other clients and other teachers have sincere concerns about the efficacy and the long term effects of the vaccine,” said attorney Mark Fonte. “They have a right to pursue their chosen profession and the government can’t arbitrarily interfere with that right.”

De Blasio said 7,000 staffers got the vaccine over the weekend.