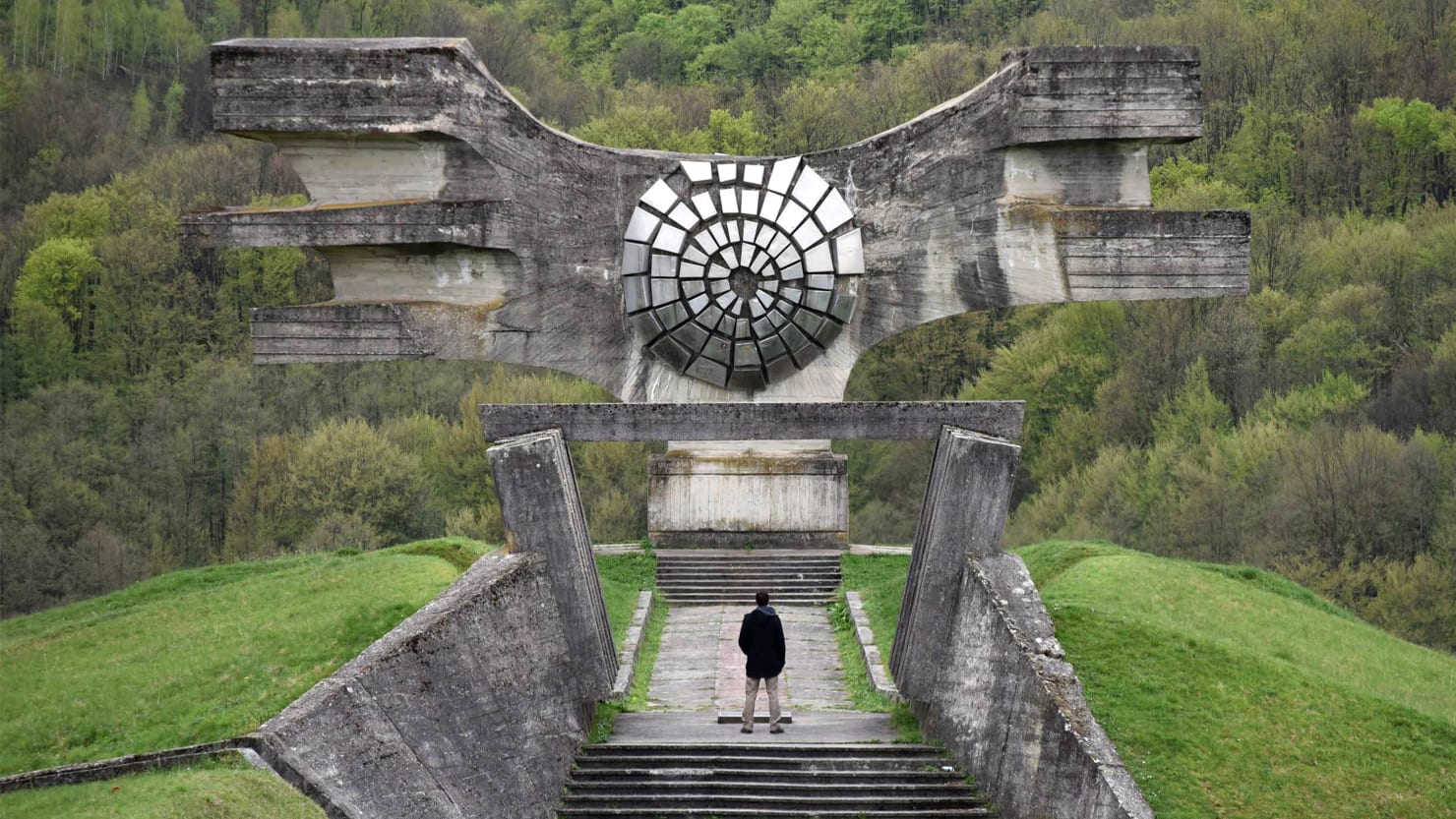 When we think of Croatia, angular concrete is not the first thing that springs to mind. Instead it’s images of yachts and jetset types at bijou boutique hotels on pebble beaches –and maybe even a bit of Game of Thrones nerdery at walled medieval cities thrown in. But while driving a stretch of the 1,800 km coastline, or further off the beaten track in rural suburbs, you’ll likely run into a masterpiece of 20th century architecture–they’re dotted all over the country.

From seaside hotels and sanatoriums to inland monuments and community centers, Croatia is awash with Modernist buildings constructed during its Yugoslavian era, most of which have been abandoned and are quietly decaying. Intrepid tourists–particularly photographers–are exploring these concrete monoliths, which are seeing a resurgence of interest 30 years after their abandonment. There’s even been a MoMA exhibition on them.

What makes these dilapidated buildings so fascinating?

Professor Maroje Mrduljas of Zagreb University’s Faculty of Architecture is an expert on ex-Yu (aka: formerly Yugoslavian) structures and he has a viable explanation; “Ruin-porn has become a global phenomenon” but, he says, it’s nothing new. ”If we return back to Romanticism of the late 18th and early 19th century, we also find fascination with ruins.” Ancient Roman classicism did it for folks back then, Brutalism does it for us now. These modernist / brutalist buildings aren’t known for being pretty and yet the aesthetic is so appealing. More importantly, he says “this nostalgic gaze is not only about shapes and forms, but the times when social justice was a common goal and when the state cared more about the citizens.” These buildings tickle any socialist sensibilities.

Just briefly; a Yugoslavia 101: The country was created as a monarchy in 1918, uniting the Slavic countries of Slovenia, Croatia, Serbia (including the autonomous province of Kosovo), Bosnia & Herzegovina, Montenegro and Macedonia. It was invaded by the Axis powers in 1941, King Peter II dashed away into exile, a people’s partisan army formed to defend itself, led by Josip Broz Tito. The Axis was driven out and in 1945 Tito became the leader of the newly renamed Federal People’s Republic of Yugoslavia, which he ruled until his death in 1980.

Under his undeniably authoritarian dictatorship there was a boom of state initiated education and health facilities, so architecture blossomed. Tourism was encouraged, with Yugoslavia famously being the middle ground between East and West, and the coast saw a legion of hotels sprout up throughout the 60s and 70s. Development came thick and fast as Tito sought to modernize the Republic, which gave designers and architects opportunity for experimentation, fuelled by an ideological care for social progress, working towards “a future that never happened” as Professor Mrduljas has said, in his TV show, Slumbering Concrete.

Why are these stunning structures still across the country, rotting for all to step over? Well it’s complicated. Really complicated. We visited a few sites on hillsides and along the coast, to try and understand what happens to buildings when the country that owns them ceases to exist.

One of the most famous and of all of Croatia’s ruins is the Haludovo Palace, a hotel in Malinska on the island of Krk – just off Rijeka in the north of the country. Croatian architect Boris Magaš designed the sumptuous hotel complex (1972) on the town’s hilltop, overlooking the Adriatic Sea–yet its palatial lobby is entirely inward facing, flipping all earlier “Mediterranean modernism” on its head, with this decadent entertainment space. The booth-tables are still there, as are the bar fittings, tile work and wood panel ceilings–the design still oozes cool, even in total dereliction. Bob Guccione, the founder of Penthouse magazine, reportedly funneled 45 million dollars in the project, which is full of “design surpluses” like its flying concrete beams over the curvaceous swimming pool–and once had a casino, spa and marina to rival any other resorts.

Yugoslavian hotel architecture pushed the boundaries of what is usually found in such buildings, Professor Mrduljas explains, “proving that unique spaces are not necessarily a privilege of the few but can be designed for the greatest number” he says. You still get this sense while wandering through the huge, devastated site, broken glass underfoot and graffiti at every turn.

Once the Haludovo was privatized in 1995 it went through a number of owners, including a very shifty character who reportedly sliced up and sold off chunks of the property’s land while driving the hotel into bankruptcy, followed by an Armenian-Russian businessman, who’s defacto owned it since the early 00s, and left it to dilapidate. Exactly why is unknown; he blames local red tape while others suggest it’s more calculated on his part. Either way it’s a crying shame; it still looks and feels salvageable, although barely.

The Haludovo Palace is just one of many abandoned stunners on Croatia’s coast. A 20 minute walk out of Dubrovnik’s walls takes you to the sprawling, multi-level wreck of the formerly luxurious Hotel Belvedere, and ten minutes drive south of that is Kupari’s “Bay of Hotels,” home to a resort of five huge ruins–all are open for visitors to walk around.

Over 14,000 spomenik (Croatian / Serbian for monument) were built across Yugoslavia from the 1950s to late 1970s–memorials of wildly varying shapes and sizes that all commemorate different local resistance fights and struggles against fascism and nazism. Two of the best in Croatia are an hour or so east of the capital city Zagreb; Petrova Gora (1981) and an hour north, Podgarić (1967), which are both mind boggling feats of design and engineering.

Petrova Gora’s monument was dreamt up by famed local artist and architect Vojin Bakić who conjured a steel flanked exterior and cocoon-like concrete interior to honor the anti-fascist struggle. His five story structure looks like it landed from the moon. No less space age in appearance, the spomenik at Podgarić was designed by artist Dušan Džamonja on the site of a resistance camp and hospital. Both are in remote, hilly locations, on landscaped grounds that once hosted visitors from across the republic. Both are no longer in use.

As Yugoslavia ended, so did its socialist ideology. The next generation was less interested in monuments to a forgotten resistance movement. It’s also plausible that pockets of anti Yugoslavian sentiment in Croatia pushed the monuments to become derelict, as Donald Niebyl explains. He’s published a book “Spomenik Monument Database” and runs an incredibly useful website, also dubbed the Spomenik Database, which documents the remaining memorials across the Balkans. He tells us how these locally funded and managed sites speak volumes: “Every community in Croatia had and still has a different relationship with its WWII / antifascist / Yugoslav heritage. Some are very antagonist towards it, others are more ambivalent, while others still deeply cherish it. The domestic sentiments of each community can often be gauged by evaluating the condition of the local WWII monument. Thus, they operate as a sort of crude barometer of how each community relates to this period of their own history.”

He reckons that sightseers come to these remote sites for more than just the architecture, or nostalgia for a different time but to get a slice of culture and history while avoiding the overcrowded, heavily populated tourist spots. “The Yugoslav monument sites are often places located in rural areas with scenic landscapes that are serene and quiet,” he says. “This allows visitors to form connections with these sites that are deep and meaningful, in an atmosphere that cultivates an authenticity that is absent in much of contemporary Western tourism.”

Arguably the most spectacular example of Yugoslavian modernist architecture in Croatia is an abandoned health resort, overlooking the sea, halfway between Split and Dubrovnik. Designed by esteemed architect Richard Marasović in 1963, who left the project before its completion, the Children’s Military Health Resort was owned by the Yugoslav People’s Army–the public weren’t allowed in andonly children who had a parent in the military and were suffering with respiratory illnesses were admitted.

The best view is obtainable from the road above Krvavica Bay; looking down over the forested grove, a concrete space station protrudes from the trees. It gets more other-worldly on closer approach; the circular floating dormitory floor has rooms on different levels, so there’s a flow of shape and size, moving up and down, keeping your eyes busy. A wide ramp curves invitingly, impressive in demeanor, leading up to the dorm level.

Professor Mrduljas is also a fan.

“It’s a complex building,” he says.“I especially like how different spaces are designed to perfectly accommodate different scales of collectivity: from the circular courtyard where public space and life of the institution intersect, to the entrance hall and upper terrace for the play of all the residents, to the more intimate rooms and smaller balconies.”

As Yugoslavia is no more, there is no more funding for maintaining this facility. However, since this complex and others like it are protected cultural monuments, investors can’t buy them and make major changes. It’s a difficult retrofit they usually avoid. And so there’s a sort of a stalemate–it can’t be demolished but is seemingly too detailed for renovation either.

Whether the peak of interest in ex-Yu architecture will make any difference to local policy in Croatia remains to be seen. There’s no tax laws around leaving buildings empty and no policing of ownership, so it seems there isn’t much to be done. Even experts like Mrduljas don’t see much hope: “We encounter two types of ruins or locked architecture: privately owned and state-owned. In both cases, it’s very hard to establish meaningful discussion about the future of these assets.” The sad truth is, he says, “unused buildings inevitably decline, it’s a well-known fact.” Tread carefully if you visit them, while you still can.